Playing at home last weekend never felt better for the Trapper women’s basketball team. After a month of traveling in five states and over 3,500 miles on a bus, NWC opened its season at Cabre … 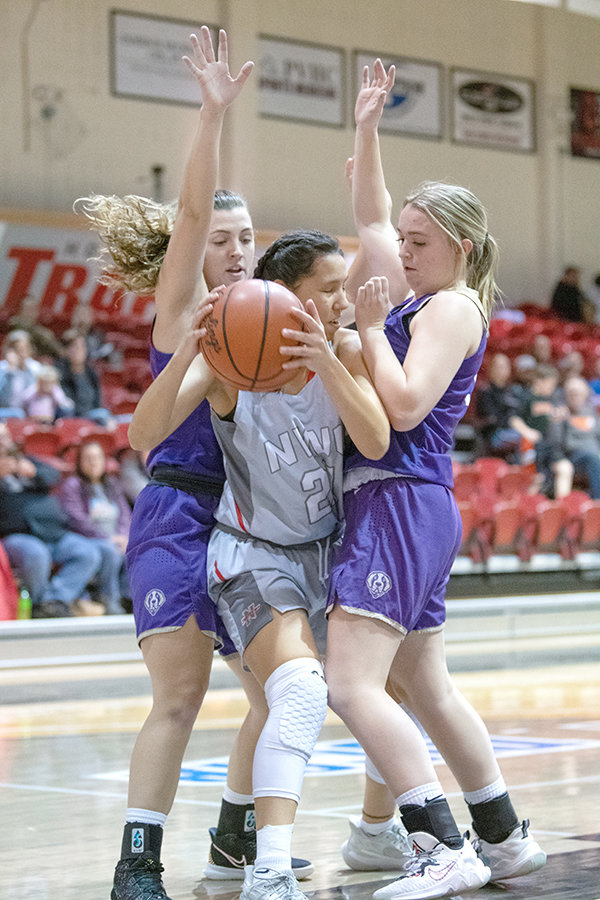 NWC freshman Nayeli Acosta is double teamed by Carroll College JV defenders during their contest on Friday. Acosta and the Trappers put up some of their best shooting performances of the season in their first home contests of the year, after a month on the road.
Tribune photo by Carla Wensky 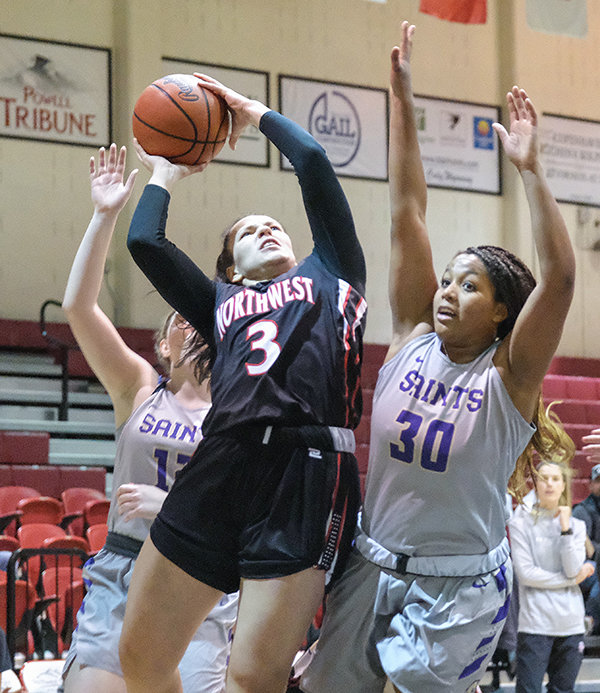 NWC sophomore Celina Tress shoots a layup over two Carroll College defenders during a matchup on Saturday. The Trappers led wire-to-wire in both victories over the Saints in their first home games of the season.
Tribune photo by Seth Romsa
Previous Next
Posted Thursday, December 16, 2021 8:10 am
By Seth Romsa

Playing at home last weekend never felt better for the Trapper women’s basketball team. After a month of traveling in five states and over 3,500 miles on a bus, NWC opened its season at Cabre Gym with convincing victories over the Carroll College JV.

Spending a month on the road has its ups and downs, and heading into the first game of the weekend the Trappers (6-8) were on a three-game slide. Playing for the first time in front of their home crowd this season, the Trappers started fast.

An opening basket by Darla Hernandez and a steal by Brenna Rouane led to a Kierra Cutright basket, giving Northwest a 4-0 lead over Carroll in the first 20 seconds of the game.

“The girls were so excited to come out and finally play at home,” Trapper head coach Lauren Davis said. “I think playing at home really helped us with our confidence moving forward.”

Over the next five minutes, the two teams battled to an 8-8 tie before consecutive jumpers by Hernandez and Rouane gave the Trappers the lead for good.

A 9-1 run pushed the lead to 17-9 at the end of the first quarter, giving the Trappers momentum heading into the second. NWC carried a 37-24 lead into halftime.

After a dominant first half, the Trappers again came out firing, scoring 11 points in the first three minutes, led by six from Hernandez.

“Darla [Hernandez] has been a huge asset to our program,” Davis said. “All I want from her is to be confident and I think she gained that confidence.”

Coach Davis said she has been waiting for a performance like the one Hernandez had on Friday, as she finished with a 16-point, 10-rebound double-double against Carroll.

Towards the end of the third quarter, the Trappers found their biggest lead of the game off a Rouane 3-pointer, which put Northwest up 61-38 with 1:42 remaining in the period.

Carroll made a small run to pull within 12 points, 63-51, with six minutes remaining in the fourth quarter, but the Trappers were able to hold off the charge; they never allowed the game to get within single digits the rest of the way.

Joining Hernandez in double digits scoring was Acosta with 13 points and Rouane and Celina Tress with 12 apiece.

Playing the same opponent two days in a row can be difficult, but the Trappers again came out with a purpose on Saturday against Carroll College’s JV.

Again, it was Hernandez who came out firing for the Trappers, scoring six of the team’s first eight points. NWC led 8-4 just two minutes into the contest.

Carroll battled back, tying it at 10 with 4:53 remaining in the quarter, but Rouane answered with a 3-pointer.

The rest of the quarter the Trappers outscored Carroll 11-6, and took a 21-16 lead heading into the second period.

Carroll came storming into the second period tying the game just under two minutes in, but again a Hernandez jumper put the Trappers ahead before the lead was relinquished. Northwest outscored Carroll 15-8 the rest of the quarter, and took a 36-29 lead into halftime.

The third quarter was an even affair, with both teams scoring 15 points. A strong start to the fourth quarter was key to the Trappers putting the game away, as they outscored Carroll 11-2 the first three minutes and extended the lead to 16 points. The lead grew to 25 over the subsequent minutes and the Trappers walked away with a 76-56 victory to cap a weekend in which they never trailed.

Hernandez topped her point output on Friday by finishing with 20 points. She was followed closely by Cutright, who finished with 19. The only other Trapper to finish in double digits was Kiana Quintero, who had 10 points.

Cutright was the leading rebounder for the team, finishing one short of a double-double with nine, followed by Hernandez and Rouane, who both had seven.

“Our goal is to maintain our home court advantage and one of our goals this season is to go undefeated at home,” Davis said.

She said a sense of familiarity with the court helped the Trappers get settled into games early as well as the boost of playing in front of the home crowd for the first time all year.

The Trappers will get a chance at a rematch this weekend, as they are set to host Dawson Community College (10-4), which made a late comeback against NWC three weeks ago to steal a 70-64 win.

Davis said the team is hoping to take the momentum and the lessons learned from the Carroll games — along with what the team learned in their first matchup with Dawson — to hopefully start the season 3-0 at home before dispersing for winter break.

The coach said they are trying to balance a game week as well as finals as they prepare for their final contest of 2021. The Trappers’ game with Dawson is set for Friday, with a scheduled tip-off of noon.