One of the longest road trips of the season for Trapper basketball spanned over 400 miles last weekend, as they made the trek north to Williston, North Dakota. Taking part in the Williston … 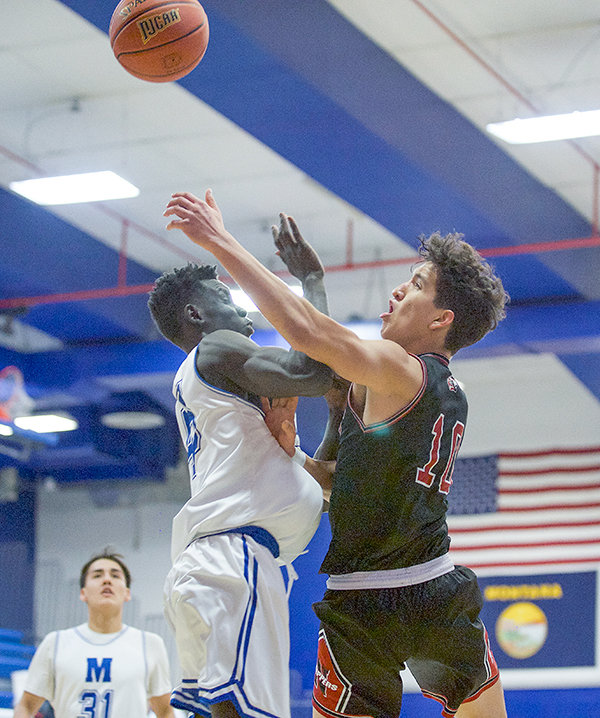 One of the longest road trips of the season for Trapper basketball spanned over 400 miles last weekend, as they made the trek north to Williston, North Dakota. Taking part in the Williston Invitational, the Northwest College men defeated Turtle Mountain Community College but dropped a contest against Williston State College.

Heading into Friday’s matchup against the Turtle Mountain Community College Mighty Mikinocks, the Trappers (6-4) were looking to build off their success at the end of a recent Montana road trip.

The contest started close as Northwest and Turtle Mountain battled early, with the Trappers leading 9-7 four minutes into the game.

The Mighty Mikinocks won the next five minutes of the game and headed into the later stages of the first half up 27-20.

However, a 3-pointer by freshman David Ayala — along with tough defense by sophomores Alex Avila and Gabriel Gutierrez — began to spark the Trappers. They went on a 17-6 run over a three-minute span to take a 37-33 lead.

“Their toughness [Gutierrez and Avila’s] is undeniable and they set the tone for what could be a good team down the road,” Trapper coach Jay Collins said.

A basket in the paint by Avila finished off the half for the Trappers on a 23-10 run, giving NWC a 43-37 lead at halftime.

A quick start to the second half had the Trappers leading by double digits at 53-42, before the Mighty Mikinocks responded and pulled within seven points with 17 minutes left in the contest.

“We always knew he [Langrehr] could shoot it, but he is starting to defend a lot better,” Collins said.

Northwest continued to keep their foot to the pedal as they poured on the points — breaking the 100-point barrier for the first time this season in a 101-71 victory.

After the week long rest period the Trappers were finally able to welcome back freshman guard Oluwaseyi Oyeku to the lineup, though Collins said he knows the team will never be 100%.

“We have 10 guys that play significant minutes, we need all 10 and we are going to need to adjust when somebody is bruised,” Collins said.

Going into their contest on Saturday, the Trappers were looking to extend their winning streak to three games as they took on tournament hosts the Williston State Tetons (3-6).

The contest started out close. A jumper by sophomore Alan Swenson put Northwest up 24-18 with 11:10 left in the first half, but that lead quickly dissipated.

“We did not keep the ball in front of us, we gave up points at the basket too much,” Collins said. “We gotta learn how to defend better.”

Northwest found a way to battle back against the Tetons over the final seven minutes of the half, as a buzzer beater layup by Gutierrez pulled the Trappers to within five points, 48-43, at the half.

That momentum continued early in the second half. With just a minute gone in the final period, the Trappers pulled to within a basket at 50-48, but another run by the Tetons depleted any hope of a comeback.

With the Tetons playing a slower style against the Trappers as well as a zone defense, Collins felt his team was unable to find the turnovers they needed.

“The biggest takeaway is that we did not get enough stops on the defensive end to get easy baskets in transition,” Collins said.

With four minutes remaining in the game, the Trappers pulled to within eight points, but they were unable to find that final run to take the lead.

The Tetons kept the Trappers at bay as they pulled away to win the contest 98-85.

“I don’t think that we took a step forward against Williston, but I think we learned something,” Collins said.

The Trappers returned home and will be able to practice for a few days before heading on their furthest road trip of the regular season: They will travel more than 450 miles to Salt Lake City for three days of games Thursday through Saturday.

Thursday will see Northwest take on the Real Salt Lake All-Stars at 5 p.m.

The Trappers will follow that up with a matchup against No. 1-ranked Salt Lake Community College at 7 p.m.

The weekend series will wrap up against Taylor Made Prep on Saturday at 1 p.m. Northwest will then return home to practice before hosting their first home competitions in over a month.

“I still believe that by January and February we will be a dangerous team,” Collins said. “What our team is best at is going to work every day at practice.”