An early season loss can help a team learn a lot. The Trapper men’s basketball team used a loss to Williston State two weeks ago to refocus on protecting the paint and dominate the Tetons in a … 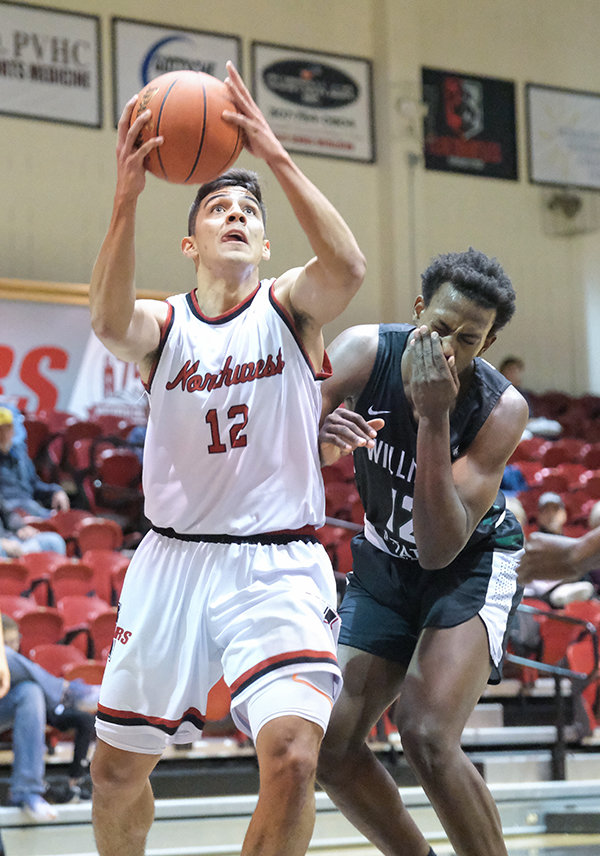 Trapper sophomore Gabriel Gutierrez drives past his defender and goes for a layup against Williston State on Sunday. Gutierrez and the NWC squad avenged an earlier loss to the Tetons and moved to 11-5 heading into a matchup with Dawson Community College on Friday.
Tribune photo by Seth Romsa 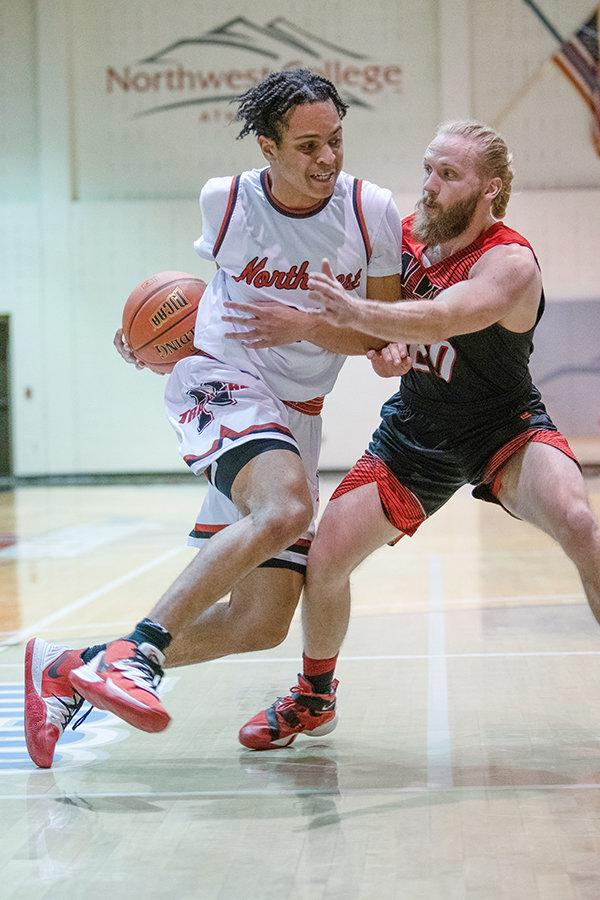 NWC freshman Bryson Stephens drives against former Trapper Levi Peterson during a game against the Northwest Alumni All-Stars. Stephens finished with a career high 34 points, as the Trappers routed the all-star team on Friday and Saturday.
Tribune photo by Carla Wensky
Previous Next
Posted Thursday, December 16, 2021 8:20 am
By Seth Romsa

An early season loss can help a team learn a lot. The Trapper men’s basketball team used a loss to Williston State two weeks ago to refocus on protecting the paint and dominate the Tetons in a rematch at Cabre Gym on Sunday.

In their first match of the season, the Trappers (11-5) failed to defend the paint, as well as dictate the pace of play against the slower Tetons (4-10) in a 98-85 road loss.

However, Northwest used that loss as a blueprint to quickly take a 9-2 lead in the first 3:30 of Sunday’s game.

A faster tempo by the Trappers allowed them to push the paint while they did not give up the rim early on, which doomed them earlier in the season.

“Not giving up the rim has been our slogan,” Trapper head coach Jay Collins said. “It is sometimes easier said than done, forcing people to score over top of an outstretched arm.”

Collins said he was proud of his team’s ability to shrink the floor and help when needed, as they held the Tetons to 42% shooting from the field and 1-for-10 from 3-point range for the game.

The lead for the Trappers continued to hold, as another balanced scoring effort from the 10-man deep rotation allowed Northwest to continue to attack Williston State from different angles.

Just over midway through the first half, the Trappers held a 25-13 lead. The entire game plan centered around protecting the paint, as the Trappers only allowed 16 points in that area.

With the lead beginning to swell, the Trappers took a 48-27 lead into halftime, holding Williston to 8-of-29 shooting in the first half, with 11 of their points coming from the free throw line.

“When you can get one-shot stops and go, that is when the game opens up,” Collins said.

The coach attributed the stops to his team’s ability to continuously practice on a consistent basis, something the team was unable to do earlier in the season with so much traveling.

Coming out strong to start the second half has not been a strength for the Trappers this season, and Williston outscored Northwest 14-5 over the first six minutes of the second half to pull within 11. However, a free throw by Gabriel Gutierrez followed by a turnover and a Zane Langrehr transition 3-pointer put the Trappers back up by 15 and stifled any comeback.

The Trappers finished off the final 13 minutes by continuing to get out in transition and finding quick baskets, pulling away for an 80-61 victory.

Northwest finished with four players in double figures. Bryson Stephens led the way with 15, followed closely by David Ayala and Juan Pablo Camargo, who both had 14, and Andre Loigu finished with 12.

Despite not finishing with the most points, Collins was impressed with Loigu’s play as he finished the game 4-5 from 3-point range.

“I was really proud of Andre [Loigu],” Collins said. “Two weeks ago he only played like two minutes in Williston, he could have tucked his head and pouted, but he busted his butt in practice and he earned his time and it paid off.”

The Trappers were led in rebounding by Alex Pena Avila off the bench who finished with 11 for the game, while Alan Swenson finished with six steals.

Northwest began the weekend by welcoming program alumni for two games on Friday and Saturday, with the Trappers winning 126-64 and 109-50.

Friday’s game between the two teams started close, with the Trappers trailing 8-7 three minutes into the game. However, Northwest outscored the alumni 64-27 the rest of the first half.

Stephens finished with a career high 34 points on Friday, and was joined in double figures by Langrehr with 17, Camargo with 15, Avila with 14, Ayala with 11 and Oluwaseyi Oyeku with 10. Avila finished with 10 rebounds as well for a double-double.

The alumni were led in scoring on Friday by Jordan Rood, who finished with 26 points; he was the only alumni in double figures.

Going into Saturday, the Trappers trailed for only 11 seconds before routing the alumni in the first half by a score of 53-16. They finished with a 109-50 win.

The Trappers were led in scoring by Camargo with 20, Langrehr and Stephens had 15, Loigu and Avila finished with 13, and Ayala and Gabriel Gutierrez finished with 11 each.

“We talked about trying to get better and we worked on our offense pretty well,” Collins said.

The coach said the alumni games were beneficial in allowing the Trappers to work on different offensive and defensive sets as they prepared for Sunday’s game.

The Trappers will face another familiar opponent in their final game of 2021, as they will face Dawson Community College (11-1), who routed the Trappers 96-61 on Nov. 17.

NWC was unprepared for Dawson’s press and the Buccaneers went on multiple large runs off of pressure, holding the Trappers to 34% shooting from the field and 20% from 3-point range.

Collins is hoping the more normal schedule of practice and games is starting to set in for the team, as they will look to handle the pressure of Dawson from the get go.

Northwest is set to tip off at 2 p.m. Friday and then head into an extended winter break; the team’s next matchup is not scheduled until Jan. 13 against Miles Community College — the Trappers’ final out-of-conference matchup before Region IX play.