In a tough conference season, the Trapper men’s basketball team continue to be on the wrong end of plays down the stretch. They lost two more games last week, extending their losing skid to … 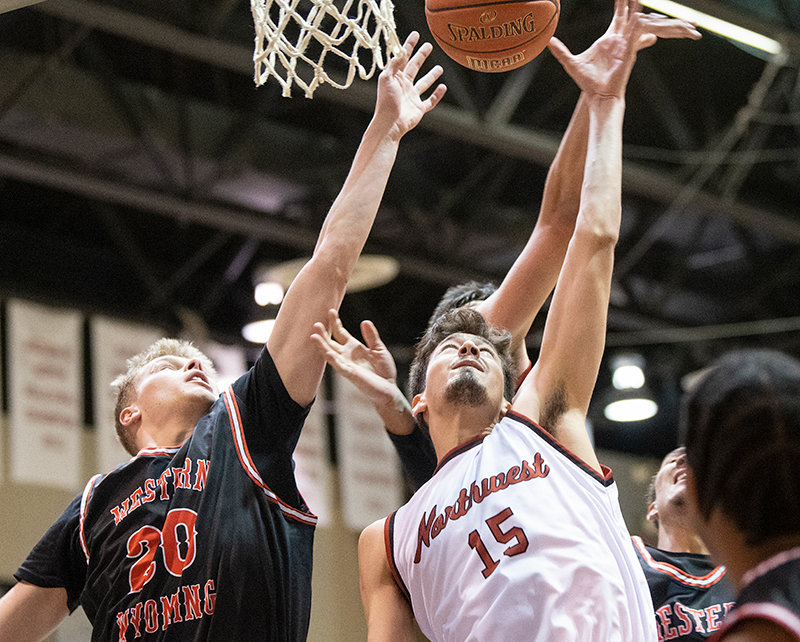 Surrounded by Western Wyoming opponents, NWC freshman Juan Pablo Camargo goes up for a rebound in the second half of Saturday’s game.
Tribune photo by Carla Wensky
Posted Thursday, February 17, 2022 8:05 am
By Seth Romsa

In a tough conference season, the Trapper men’s basketball team continue to be on the wrong end of plays down the stretch. They lost two more games last week, extending their losing skid to nine. Northwest lost to Eastern Wyoming 94-90 on the road, and dropped a home contest to Western Wyoming 75-62.

Unlike their first matchup, neither team was able to find the basket early, as the Trappers held a slim lead 8-7 after the first eight minutes of action.

Both teams later found their shooting strokes. A 7-2 run — capped by two dunks from freshman Juan Pablo Camargo — gave the Trappers a 27-24 lead with six minutes remaining in the half.

Camargo led the way for the Trappers as he had a game-high 27 points.

“JP [Camargo] had a great game, really established himself as one of the best post players in this league,” Trapper head coach Jay Collins said. “We need to help him out and be more efficient at other positions.”

Northwest extended the lead to 39-33 at halftime.

Northwest retook the advantage after back-to-back 3-pointers by sophomore Alex Avila and freshman Bryson Stephens, going up 64-63 with 12 minutes remaining.

The two teams continued to exchange baskets, but Eastern eventually built up a seven-point lead.

However, the Lancers were able to make two free throws to ice the game, and walk away with a 94-90 victory.

“I felt like we were in control of that game for most of it but did not make enough plays down the stretch,” Collins said.

Camargo led the way with 27 points, followed by Stephens with 22 and Avila with 10.

The Trappers were again unable to find the basket early on, as Western Wyoming dominated the glass to take a 14-5 lead.

“Early on we could not get a rebound to save our lives,” Collins said.

Despite not being able to score, Northwest was able to hold the Mustangs offense. Western appeared ready to pull away at 27-12, but the Trappers pulled it back to 30-21 on a 3-pointer by freshman David Ayala with 1:06 left.

The Mustangs scored four more points to end the half and take a 13-point lead into the locker room.

“Defensively in the first half we did a great job, we just could not score,” Collins said. “We were not taking bad shots, they just were not going in.”

Starting the second half, Northwest made a strong push, making it 40-34 with 14:01 left. However, the Trappers were never able to make it a two-possession game. Western pushed the lead back out to double digits at 54-42 with 9:44 remaining.

The Trappers were unable to make a push late, as Western outrebounded the Trappers 42-21 and pulled out a 75-62 victory.

Despite the poor shooting effort, Collins said the team still has hopes of a strong ending to the season.

“I have never really dealt with this in my almost 20 years of coaching,” the coach said. “The guys are still together, still believe and are doing the right things, but there is one thing or another that keeps happening and we cannot get over the hump.”

Despite being 0-7 in region play, the Trappers still have the opportunity to avoid being the bottom seed heading into a play-in game.

Northwest was set to host LCCC (14-11 overall, 5-3 Region IX North) on Wednesday, looking for revenge from a prior contest, in which they lost to the Golden Eagles after leading by 13 at halftime.

“We gotta put 40 minutes together, that is the bottom line,” Collins said. “This league is too good to only play 35 minutes of good basketball.”

The Trappers will then go to Riverton on Saturday to take on Central Wyoming (8-14 overall, 1-6 Region IX North).

Northwest will return home on Monday to take on Central in a COVID-19 makeup game at 7:30 p.m.

The Trappers will then likely head on the road on Feb. 25 to face a Region IX South opponent in a conference tournament play-in game.