After two straight victories over Lovell last week, the Pioneers took to their home field Tuesday night to take on Cody in a battle for first place in the A Northwest — with Cody taking the … 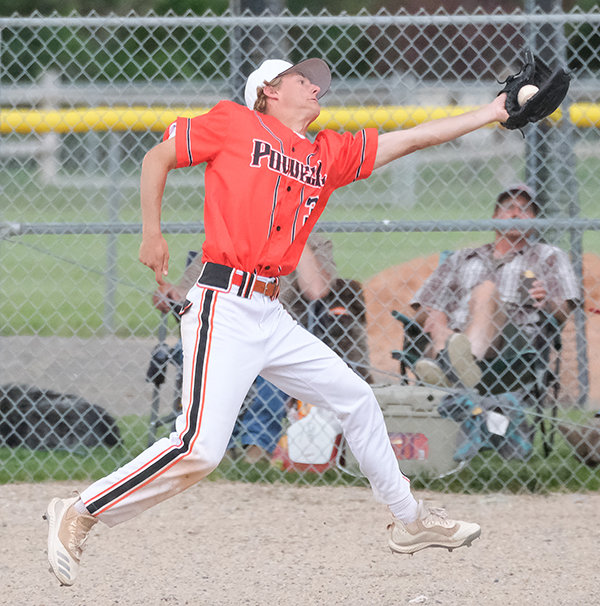 Running and putting all his effort into a grab, Keaton Rowton catches a foul ball to give the Pioneers hope late in the game against Cody.
Tribune photo by Seth Romsa 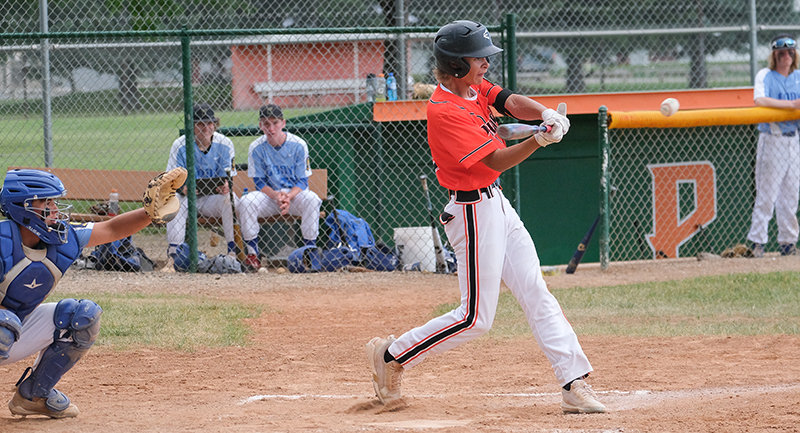 Dalton Worstell looks to drive a pitch during the Pioneers game against Cody on Tuesday. The Pioneers dropped to .500 in the A Northwest after losing the doubleheader.
Tribune photo by Seth Romsa
Previous Next
Posted Thursday, June 30, 2022 8:25 am
By Seth Romsa

After two straight victories over Lovell last week, the Pioneers took to their home field Tuesday night to take on Cody in a battle for first place in the A Northwest — with Cody taking the doubleheader victory 11-6 and 5-2.

Powell appeared to be in trouble early, with the bases loaded in the top of the first inning after a double and two walks.

Thankfully for the Pioneers, there were two outs, and Gibson was able to strike out the final batter to get out of a jam.

The Pioneers were not so fortunate in the second.

A walk followed by two singles brought in one run, and another walk coupled with a single brought in two — making it 3-0 after the second.

“That was on me,” Pioneers Manager Jason Borders said. “I probably left Jacob [Gibson] in a little longer than I should have, and I should have brought someone else in sooner.”

At risk of being run ruled, the Pioneer offense woke up in the bottom of the fifth.

Keaton Rowton was walked to start the inning, and Ethan Welch reached first on an error to give Powell two baserunners with no outs.

Brock Johnson brought in Rowton on a single to get the Pioneers on the board.

Jhett Schwahn then grounded out but scored Welch, and Cade Queen brought in Johnson to make it 10-3.

The Pioneers were not done.

After hitting two home runs in the doubleheader against Lovell last week, Trey Stenerson stepped up to the plate looking to continue his hot streak.

Stenerson again hit a deep shot to left field for his sixth home run of the season, bringing in Queen to cut the deficit in half to 10-5.

Powell was unable to continue its run, as a jumping catch led to a double play and ended the inning.

The Cubs added one more run in the sixth; an error throwing to first forced the ball out of Aiden Greenwald’s glove and scored a run.

The Pioneers did not get any runs in the sixth and held Cody to no runs in the top of the seventh, setting up an important final half inning.

Schwahn and Queen were walked to start, and Stenerson doubled to bring in Schwahn to make it 11-6.

Unfortunately, it was not enough for Powell; Cody got three straight batters out to finish the first game 11-6.

Despite the loss, Borders was pleased with the way his team responded after going down 10-0.

“It was definitely big for us to cut into that lead,” Borders said. “I felt like we still had a chance to get back into that game, but it was too little too late.”

Stenerson finished the game for the Pioneers 2-4 with three RBIs to lead the way.

Cody outhit Powell 19-7, as the Pioneers searched for answers in game two.

A short rest allowed Powell to regather its bearings, sending Brock Johnson onto the mound the second game.

The Cubs started out the second game much like the first, this time scoring two runs in the first inning to jump out to a quick 2-0 lead.

This time Powell had an answer. Johnson reached base on a single to start the inning and was later scored on a sac fly by Stenerson to make it 2-1 after the first.

Cody extended its lead in the second on a triple to deep center field and a sac bunt to make the score 5-1 after the second inning.

From that point forward, Johnson essentially was able to shut down the Cubs at the plate, allowing minimal hits and not allowing another run for the rest of the contest.

“With Brock [Johnson] he needed to get going early and he could not find it,” Borders said. “He needed to relax and settle in and once he did that, he was dominant.”

Unfortunately for Powell, the offense stalled until the fourth inning.

Stenerson reached first on a single to lead off the inning and was brought in on an Aidan Wantulok double to cut the lead to 5-2.

Powell appeared to get another run in the bottom of the fifth, but the run was called back due to interference at the plate being called after Queen walked in front of the catcher after a strikeout.

Johnson’s night was called in the seventh with two outs after hitting his pitch count, bringing in Greenwald to try to get the final out.

He struck out the final batter, giving Powell an opportunity in the bottom of the seventh.

Dalton Worstell got on first after a walk, and Johnson later joined him to give the Pioneers two baserunners with two outs and the tying run at the plate.

Worstell was called out trying to steal third on a bang-bang play, ending the game and giving Cody control of the A Northwest.

Johnson finished with 12 strikeouts, along with giving up six hits and four earned runs.

The Pioneers’ schedule does not slow down this week, as they head on the road Thursday (today) to take on the Sheridan Jets (14-14 overall, 4-2 A Northeast).

“We are getting into the home stretch here and want to put things together,” Borders said. “I want to start quicker. We just need to come out ready to go and take care of things.”

The games with Sheridan are set to be a doubleheader, with the games starting at 5 p.m. and 7 p.m.

Powell then returns home on Friday to take on Lovell (21-11 overall, 1-5 A Northwest) in a nine inning contest.

The matchup was originally scheduled to be a doubleheader, but due to busy schedules, the two teams agreed to play one contest.