Coming into the season, Peyton Roswadovski was not expecting to come out among so many freshmen and players in Region IX as the Freshman of the Year and All-Region IX honors. 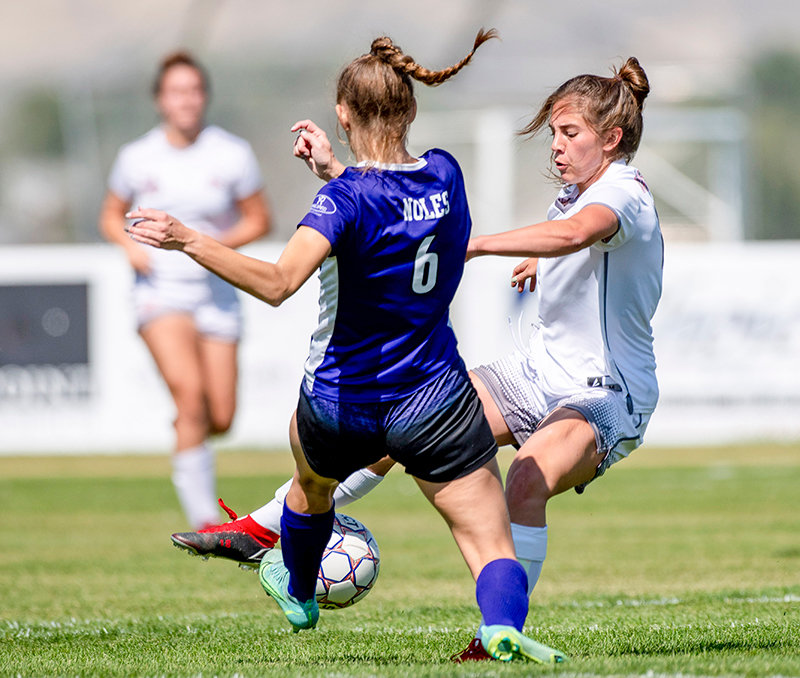 Freshman forward Peyton Roswadovski puts in a tackle during the Trapper’s match against the Gillette Edge on Sept. 12. Roswadovski was named the Region IX Freshman of the Year after scoring 15 goals, tied for 17th in the NJCAA.
Tribune photo by Mark Davis 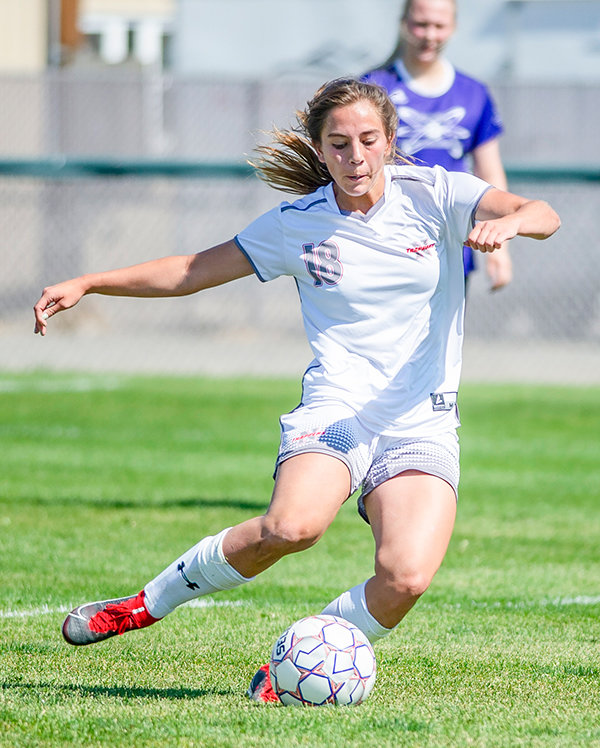 Freshman forward Peyton Roswadovski makes her move to shoot on net during a Sept. 12 match against the Gillette Edge. Roswadovski was named to the All-Region IX team for her efforts during the season.
Tribune photo by Mark Davis
Previous Next
Posted Friday, November 26, 2021 8:00 am
By Seth Romsa

Coming into the season, Peyton Roswadovski was not expecting to come out among so many freshmen and players in Region IX as the Freshman of the Year and All-Region IX honors.

“I was kind of surprised with how many freshmen and how many good players there are out there,” the Northwest College soccer standout said.

Throughout her career, Roswadovski has been an athlete who can play at all three levels of the pitch. She played as a forward before high school, played defense throughout her time at Thunder Basin High School in Gillette and then transitioned back up front and serving as the primary striker (along with some extended play in the midfield) for the Trappers this year.

Moving her back to striker proved to be a good decision from head coach Rob Hill, as Roswadovski went on to score 15 goals during the season. That topped the rest of the region’s players by five goals and tied for 17th in the NJCAA.

“I was a little nervous that I would not be able to do my job after not playing up there for a few years,” Roswadovski said. “Rob [Hill] helped me out a lot and figured out how we could work as teammates to score.”

Hill said Roswadovski almost did not play college soccer, having made plans to join the University of Wyoming orchestra. But she was a late signing for NWC after a summer All-Star game.

“She needed to play,” Hill said. “She was not ready to quit.”

Roswadovski was known to be a physical player in high school, but when she came out in her first college game, she knew the higher tier was definitely going to be more physical and she would have to adjust fast to hold her ground.

Throughout the season Roswadovski showed her ambition with winning goals — including scoring a goal to win at Otero and secure a hat trick on the road.

“I have high hopes for her next season and for the future,” Hill said.

Moving into her sophomore year, Roswadovski plans to focus more on ball control, shooting and finishing around the net as she looks to take the next step forward.

Hill said this is the second time the program has had the Freshman of the Year, with the other being Haley Ahrenholtz in 2011-12.

Along with Roswadovski’s honors, Alexa Williams, Amrey Willoughby and Zoey Bonner were all named as honorable mentions for Region IX.