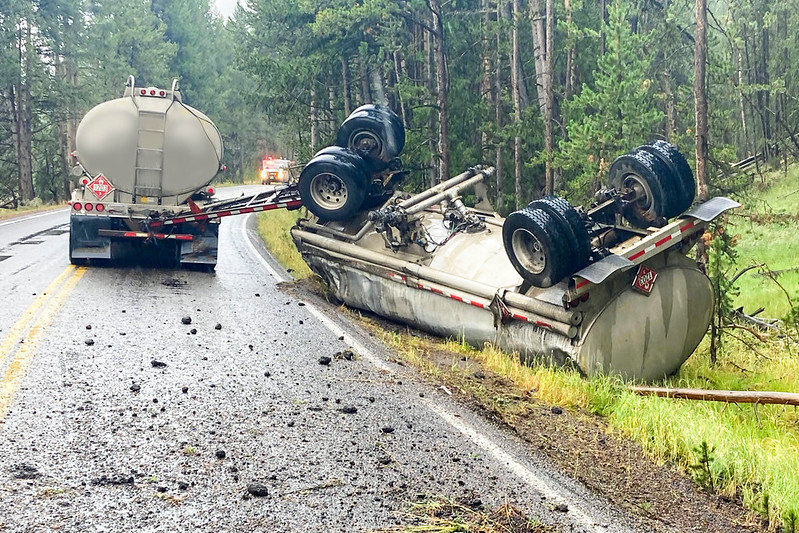 The tandem trailer on this truck flipped over while traveling on Yellowstone National Park's Grand Loop Road on Thursday, spilling thousands of gallons of unleaded gasoline. The truck had been attempting to deliver fuel to facilities in the park.
Photo courtesy Shawn Brown, National Park Service
Posted Thursday, August 27, 2020 11:29 am

The tandem trailer, which was carrying unleaded gas to faciliites in Yellowstone, flipped over on the west side of the road and spilled roughly 3,000 gallons of fuel, park officials said Friday. Park staff are asessing the impacts of the spill, but "there is no evidence that gasoline entered the Yellowstone River," said the release. It added that "this incident remains under investigation."

Meanwhile, the road between Old Faithful and West Thumb Junction reopened to travel at 8 a.m. Thursday. The route had been closed since last weekend due to the 820-acre Lone Star Fire, which is burning a few miles southeast of Old Faithful. There was no significant growth of the fire on Wednesday, and heavy rain hit the fire area Wednesday night. Firefighters planned to hike in and observe the impact of that precipation on Thursday.

While the Grand Loop Road is currently open through the Lone Star Fire area, "this section of road could close if and/or when fire activity increases," fire managers cautioned on Thursday morning, adding that, "Trailheads and picnic areas along this section of the road will remain closed to the public."

A total of 38 people are currently assigned to the fire.