Rural voters’ polling place to be decided by commissioners

Rural voters’ polling place to be decided by commissioners 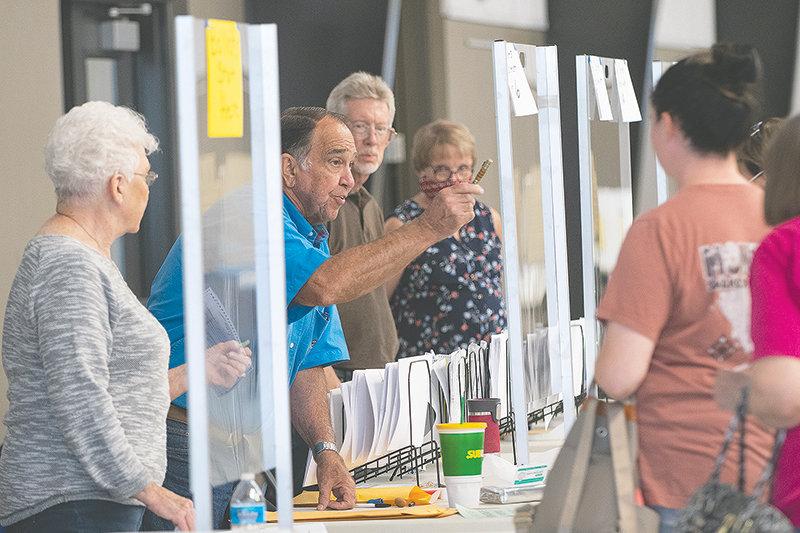 Election judge Jacob Dillinger (at left) visits with a voter during the Aug. 18 primary election at the Park County Fairgrounds. At an Aug. 19 county commission meeting — in which multiple citizens expressed opposition to closing several rural polling places for the general election — Dillinger shared frustration with the election process. Clerk Colleen Renner said she’s addressing his concerns and commissioners are now set to reconsider the polling places on Sept. 15.
Tribune photo by Mark Davis
Posted Tuesday, September 1, 2020 8:20 am
By CJ Baker

The Park County Clerk’s Office did not follow the law in closing five rural polling locations for the upcoming general election, County Attorney Bryan Skoric determined last week. Skoric says state statute lays out a specific process that must be followed to change polling locations — and puts the decision in the hands of county commissioners rather than the clerk.

As a result, the commission will decide on Sept. 15 whether the polling places in Clark, Wapiti, Heart Mountain, Garland and the South Fork should remain closed or be reopened for the general election.

If commissioners want to shutter those five sites for the general election, he said “they have to go through and record in the minutes the reasons why it’s required.” Skoric added that, theoretically, “the commissioners might say no” to Clerk Colleen Renner’s plans and choose to reopen all or some of the polling sites on Nov. 3.

Renner had announced in May that, due to concerns about social distancing and a shortage of election judges amid the COVID-19 pandemic, she intended to close the polling locations in Clark, Wapiti, the South Fork, Heart Mountain and Garland.

The Wyoming Secretary of State’s Office had issued a directive in May making it easier for clerks to consolidate polling locations for the primary election, and those five sites were closed for the Aug. 18 primary. However, some voters were angered by Renner’s plans to only allow in-person voting in Powell, Cody and Meeteetse in the general election as well.

Two local residents — Vince Vanata of Cody and Wendy Annis of Clark — filed a formal complaint in July, alleging that Renner had failed to follow the proper procedures for changing polling sites.

In an attempt to address those concerns, Renner formally presented her consolidation plan to commissioners on Aug. 19. After hearing from a few unhappy voters — including Vanata and Annis — Commission Chairman Joe Tilden said the decision was up to the clerk and effectively ended the discussion.

However, the day after the meeting, on Aug. 20, Renner said she received an email from the Secretary of State’s Office, reminding clerks that the extra flexibility on polling locations expired following the primary election.

That meant that, in order to keep the Clark, Wapiti, South Fork, Heart Mountain and Garland sites closed in November, Renner needed to publish public notices advising residents of the proposed closures; the law also indicates that commissioners must be the ones to decide whether the changes are “required by the public convenience.”

After getting the Aug. 20 email from the Secretary of State, “I immediately answered and I said, ‘Oh, my, I thought this was meant for the [whole] election cycle, not just the primary,’” Renner explained last week, adding that she feels bad about the mixup.

“So part of it was my fault. I misunderstood the directive,” she said.

Skoric concurred that the process had not followed state law and advised Renner last week to re-do the process.

“We’ll proceed and do it correctly,” she said.

Vanata, one of the citizens who filed the complaint, welcomed the decision and praised Skoric.

“My only hope is the county commissioners will allow the public to speak and express their concerns,” Vanata said in an interview, “especially since this is the third attempt to get it right.”

Whether the new process will bring a different result remains to be seen.

Renner said she continues to recommend keeping the polls closed in Clark, Wapiti, the South Fork, Heart Mountain and Garland. She plans to remind commissioners that her office’s budget is down about $60,000 from the 2018 election cycle — and that she continues to have a “lack of election judges.”

Earlier this year, the clerk’s office reached out to 349 people who’d previously expressed interest in serving as an election judge. The clerk wound up with only 69 for last month’s primary election; for comparison, the clerk’s office had 176 judges for the 2018 primary. And despite recent publicity about the polling locations and a shortage of judges, only five people have signed up as judges in the last couple of weeks, Renner said.

“It’s just a different year all the way around,” she said.

Commissioners generally did not share their views on the polling place closures during their Aug. 19 meeting.

However, Commission Chairman Joe Tilden said Thursday that he plans to support Renner’s proposal to close the polling locations.

Beyond just not being able to find judges, Tilden noted that having fewer judges and polling places “does save the county a lot of money.”

“That’s certainly not a deciding factor, but every little bit helps,” he said. Tilden added that, “my own personal opinion is, we had a record turnout for a primary and it seemed to go very smoothly.”

Meanwhile, Commissioner Lloyd Thiel of Clark has said the closed polling locations should be reopened for the general election. At last month’s meeting, after a couple of citizens raised concerns about the process, Thiel asked whether the commission could meet with Skoric “to make sure that we did in fact follow these steps” required under state law.

In response, Tilden said he had already visited with Skoric “and his interpretation of the statutes [is] that … Colleen [Renner] is following the state statute to the letter.”

“So I see no reason to prolong this,” Tilden said. “And by Bryan [Skoric]’s interpretation of the state statute, the decision rests in the clerk’s hands and it’s not our decision to make.”

However, Skoric said last week that he never made that statement and was still reviewing the complaint at the time of the Aug. 19 meeting. Ultimately, he concluded the law had not been followed and the decision rests with the commission.

Commissioners will discuss the proposed changes to the polling locations at 11:20 a.m. on Sept. 15 at the Park County Courthouse; Skoric said he plans to attend.