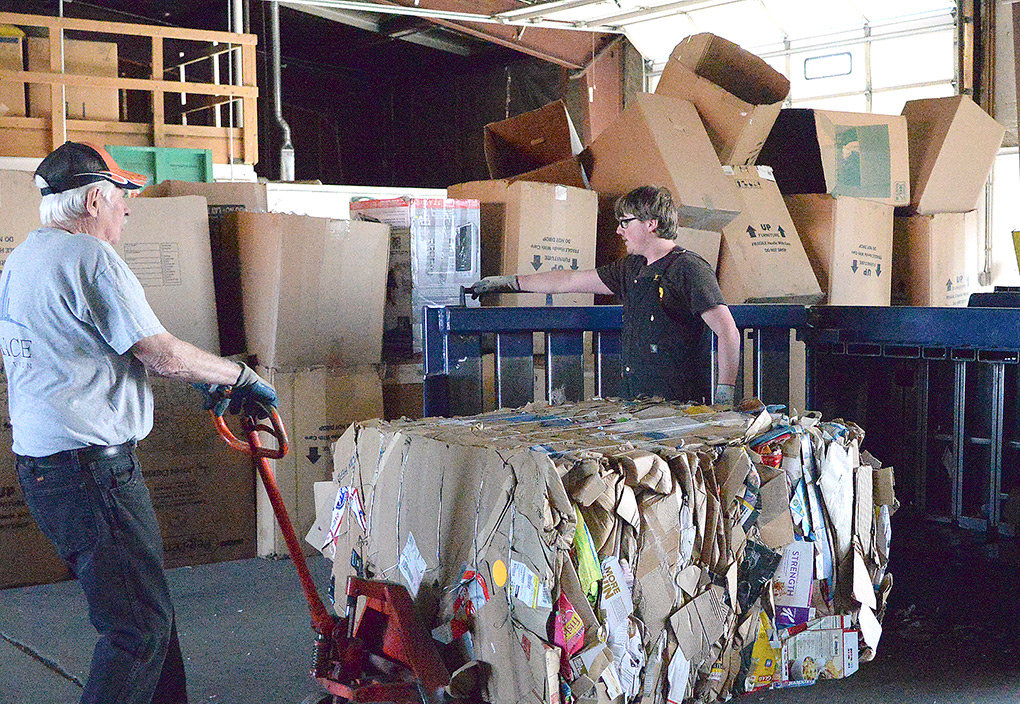 Jerry Barton pulls a 1,300-pound block of cardboard out of a baler Friday, while Dustin Curtis holds the door open at the Powell Valley Recycling Center. Once a valuable commodity, cardboard has lost more than half its value in the past year.
Tribune photo by Kevin Killough 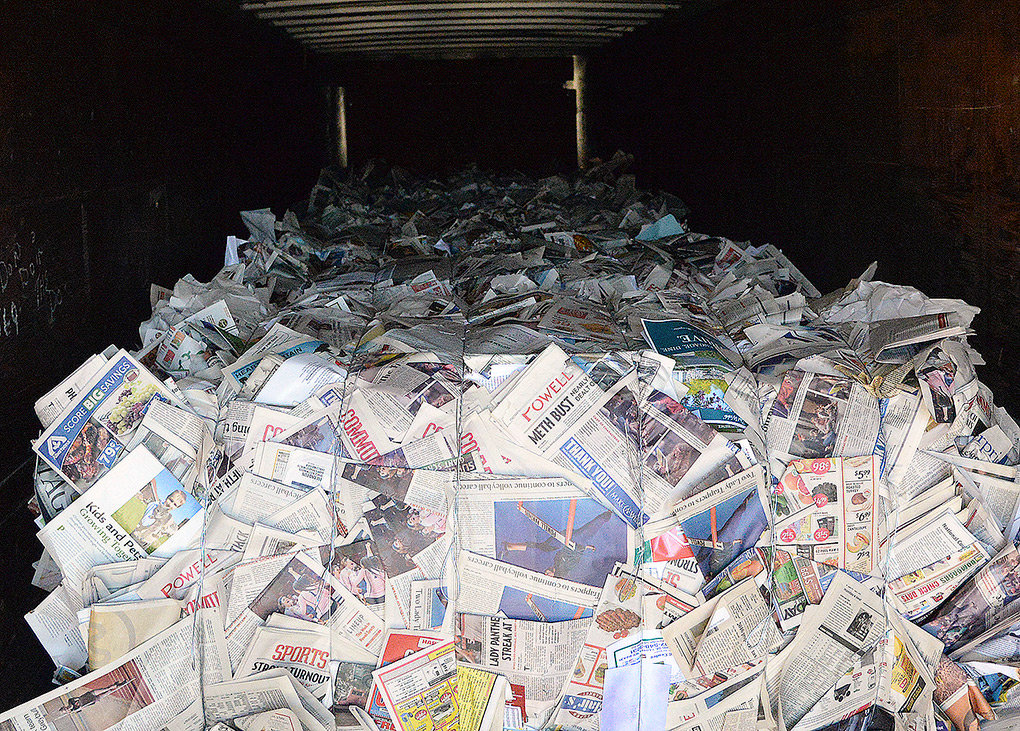 Bales of newspaper are stored in a trailer at the Powell Valley Recycling Center. While many recycling commodities have lost value, newspaper has remained fairly steady, but it was never an important revenue source.
Tribune photo by Kevin Killough
Previous Next
Posted Tuesday, April 23, 2019 8:00 am
By Kevin Killough

Behind the corrugated metal recycling shop are bales of cardboard, each weighing around 1,300 pounds. Before shipping them off to Billings, PVR leaders have been storing them up as they wait for commodity prices to get better. Right now, the market is so bad that the bales aren’t worth much at all; there’s a dozen or more bales dropped off from Greybull.

Jerry Barton, who manages the shop every other week, said almost everyone who drops off material at the shop is pretty friendly. But there’s the occasional resident who complains about the $2 per month each solid waste customer in Powell pays to keep PVR running.

“If they weren’t paying that $2, they’d pay a lot more for the landfill,” Barton said.

Barton said the complaints, though few, can really wear on someone just doing his job in an industry where no one is getting rich. If things don’t improve, PVR could go broke.

Marynell Oechsner, president of the Powell Valley Recycling Board, said commodity prices have hit the nonprofit organization just as freight costs have increased.

“We’re really on a tight budget at this point in time,” Oechsner said.

Beginning in the 1980s, China began importing secondary raw materials and became the world’s largest importer of recyclables. However, citing environmental concerns, China began phasing out such imports in 2017, and the commodity market for recyclables is now collapsing.

Powell is not the only Wyoming recycling center feeling the pinch. The Ray Lovato Recycling Center Board of Directors, which oversees a center in Rock Springs, announced earlier this month that — if it doesn’t receive more funding — it will close before the end of April. The center has been operating since 1994.

Also this month, the Cheyenne City Council approved a contract modification between its waste department and WYCO Recycling to increase the payments the recycler receives for sorting and distributing waste. The new contract doubled the per ton fee the city pays from $40 to $80, doubled the minimum total fees to $20,000 per month, and doubled the maximum annual cap to $200,000.

“Cardboard was our bread and butter,” Gutierrez said.

Oechsner said the commodity prices are only part of the challenges the center is facing. Trucking regulations have also increased the cost of freight, increasing expenses at a time revenues are slimmer.

“Our freight eats us up,” the board president said. “The commodities don’t tell the whole story.”

Rural locations generally face much higher freight costs due to the long distances material has to travel to processing facilities. There are no such facilities in Wyoming, so PVR ships everything to Montana, Idaho or Colorado.

Oechsner is hoping that, at some point in the future, a processing facility will open nearby, which will lower freight costs. But with the Chinese market closed to America’s garbage, there’s not a lot of buyers for the material anymore. So, the likelihood of a new facility opening up in the Cowboy State got a lot slimmer. And while rural locations have to ship greater distances for processing facilities, they have a lot more nearby land for landfills and a lot less residents to fill up recycling bins.

Prices for other commodities — such as newspaper and office paper — are holding more steady than cardboard, Gutierrez said, but they’re not as lucrative.

Plastics have always been a tough market, and PVR has been lucky to break even. The organization usually bales and ships plastics when they transport other products in order to save on shipping.

Commodity prices have become so bad for plastics that there are many types that no one will take anymore, as there’s no market.

Oechsner said PVR takes in whatever it can get processed, even if they just break even, as it saves money on landfill costs to the residents of Powell.

“We feel that part of our mission is diversion,” she said.

In FY2018, PVR received $67,000 from fees assessed on City of Powell utility bills, and Park County supplied about $9,000. The city’s appropriation pays for PVR’s labor costs, and the county money covers mortgage, taxes and insurance. That left the commodity revenues, which are drying up, to cover equipment repair and overhead.

Oechsner said they don’t have enough savings to deal with a whole lot of emergencies. PVR planned to purchase a new baler, but they’re holding off on that for now. If one of the current balers breaks, it will create a huge strain on the facility.

Powell Valley Recycling does have a few things going for it, however. They’ve been collecting plenty of material, reflective of a community that cooperates with bringing their recyclables to the facility. There’s also a higher volume of cardboard coming in since online retail brings boxes daily to people’s doors.

“We thank everybody that recycles with us. We appreciate their business and their support in all ways,” Oechsner said.

Gutierrez said some people come in and donate money to help with the operation, and they have the occasional volunteer.

“The community is awesome, without asking anything in return,” Gutierrez said.

Oechsner said PVR’s employees are a huge asset to the operation, showing a lot more dedication than one would expect for what they are paid.

She said shop manager Bob Taylor has done a lot to streamline operations and find little ways here and there to make it more efficient.

“They have been an integral part of Powell Valley Recycling,” she said.

On Friday, the workers were having a slow day as there wasn’t a lot to sort. Dustin Curtis, who has been working at the center for 12 years, pulled a large bin inside the shop to sort out cardboard. A sign on the side of the bin read, “No styrofoam.” From the pile, Curtis pulled out a long piece of sytrofoam and set it aside.

For the time being, PVR is doing what it can to fulfill its mission. They’ve got a lot of space on the property to store up cardboard in hopes commodity prices will improve, but Oechsner warns they can’t hold it all indefinitely.

“We want to keep our doors open as long as we can,” she said. “We’re providing a service to the community and keeping things out of the landfill.”