Once-missing petroglyphs to be digitally restored

After being blasted off a cliff face south of Greybull almost 60 years ago, a collection of Native American rock art went on display at the Buffalo Bill Center of the West. And then, they …

Once-missing petroglyphs to be digitally restored 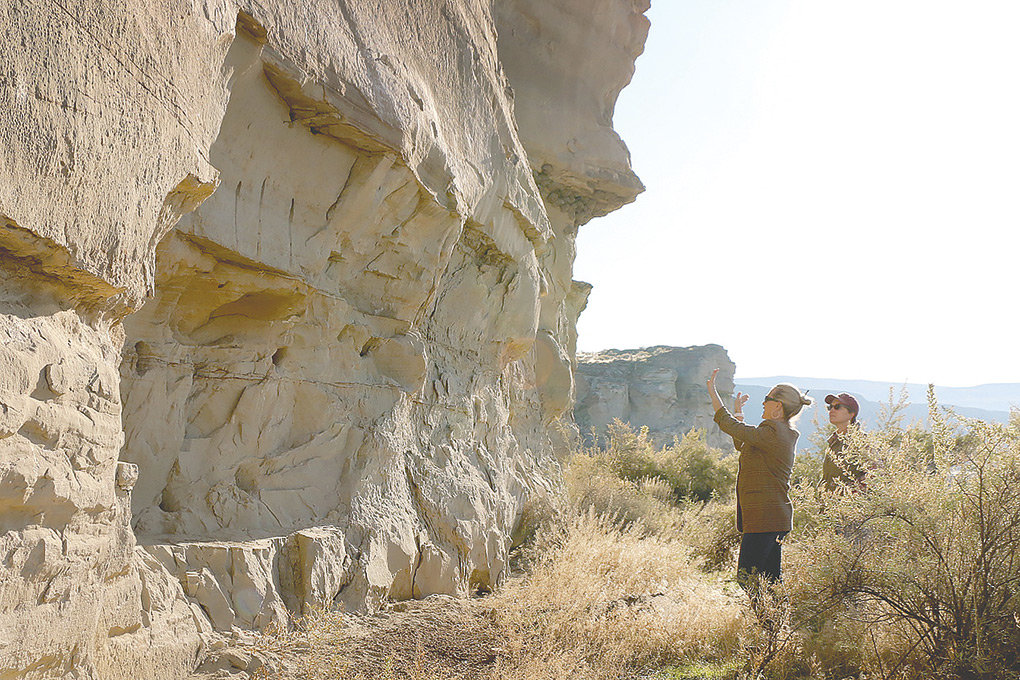 Bonnie Lawrence-Smith of the Buffalo Bill Center of the West takes a tour of the Greybull South site, where Plains Indian rock art was removed in the 1960s for display at the museum. Archaeologists are currently working to build a digital reconstruction of the cliff face.
Courtesy photo 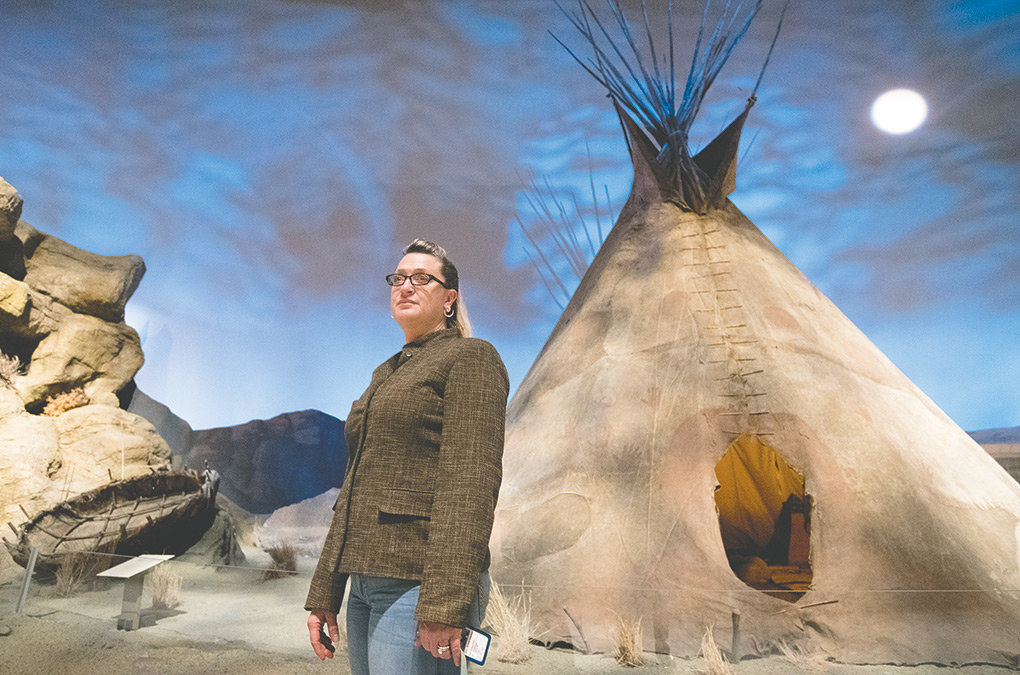 Bonnie Lawrence-Smith found one of the missing pieces of rock art from the Greybull South cliff on display in the Plains Indian Museum of the Buffalo Bill Center of the West. Lawrence-Smith is a curatorial assistant at the Draper Natural History Museum, also housed within the center.
Tribune photo by Mark Davis 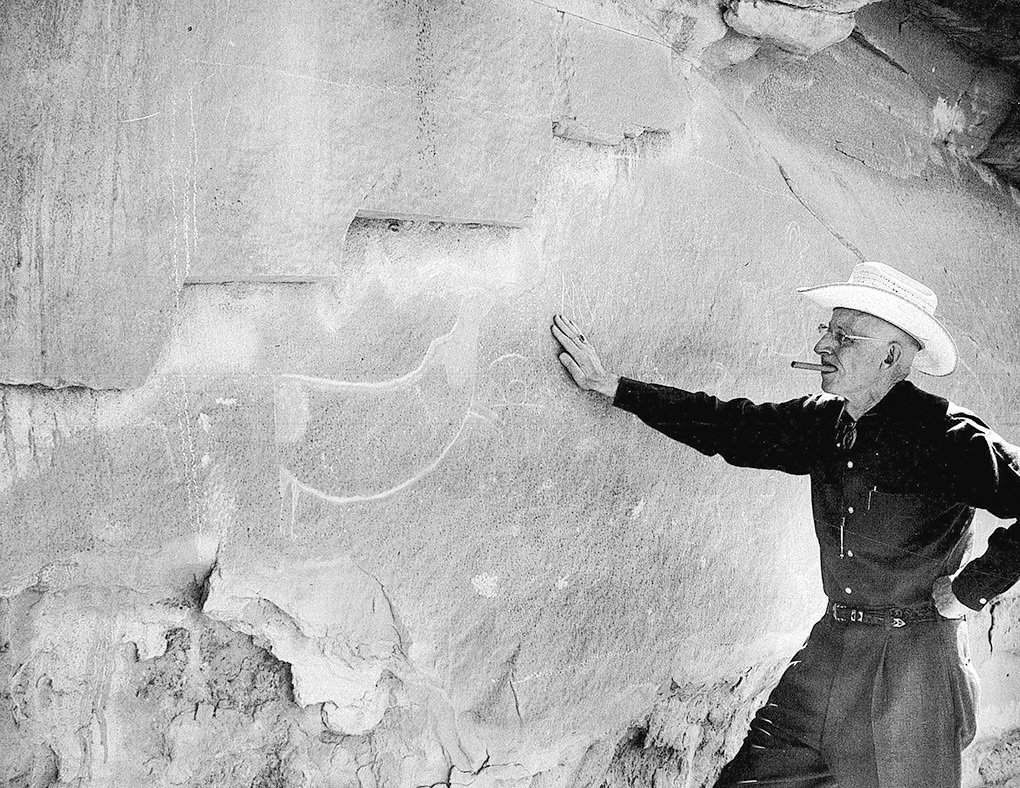 Harold McCracken, former director of the Buffalo Bill Center of the West, inspects Plains Indian rock art prior to purchasing it and having it removed from a cliff in 1962 for display at the museum.
Courtesy photo
Previous Next
Posted Thursday, January 31, 2019 8:00 am
By Mark Davis

After being blasted off a cliff face south of Greybull almost 60 years ago, a collection of Native American rock art went on display at the Buffalo Bill Center of the West. And then, they disappeared.

For decades, the federal government looked for the artifacts, hoping to reclaim them. But it was only recently that the art was rediscovered — and now, the ancient drawings are about to get a new future in the digital world.

It’s an odd story with many twists — very few of which were good for the artwork.

The prehistoric petroglyphs, drawn by Plains Indians, were first brought to fame by regional explorer Bob Edgar, who seemed to have a knack for finding rare objects.

However, after the rock art became more well-known, those with less appreciation for the artifacts took frequent pot shots at the drawings. The surrounding cliff face was also being mined for rip rap to shore up the banks of the Greybull River.

It was in 1962 that Harold McCracken — the first director of the Buffalo Bill Center of the West — stepped in.

McCracken arranged to have the large art segment removed from the cliff and what was then thought to be private land.

McCracken paid $300 to Mr. and Mrs. John Tillard to take the rock from their property and the Basin Monument Company received $1,400 to carefully dynamite the panels off their home on the sandstone cliff.

Highly publicized, the sale and removal was covered by media outlets across the Big Horn Basin and into Montana. However, what McCracken didn’t know at the time was that the panels of Greybull South actually rested on federal Bureau of Land Management property.

It was an innocent attempt of both conservation and of collecting curiosities for the Whitney Western Art Museum, said Bonnie Lawrence-Smith. She’s a curatorial assistant at the Center of the West’s Draper Natural History Museum and president of the Wyoming Archaeology Society’s Absaroka Chapter.

McCracken had the large segment of cliff face cut into displayable-size segments prior to being placed on display at the center in Cody. But the display eventually fell out of favor and was moved to storage.

In the meantime, officials with the Bureau of Land Management claimed ownership of the panels and began a decades-long effort to find and retake them; the lack of paperwork — including clear evidence of who owned the cliff — complicated both the search and return of the artifacts.

Lawrence-Smith spent two years periodically searching the Center of the West’s multitude of vaults and storage facilities. Eventually, she found eight of the nine fragments of the rock art stored in a long-forgotten corner of an off-site Quonset hut. Having been unceremoniously left there decades earlier, they were in bad condition.

Once Lawrence-Smith found the missing panels, the museum agreed, without hesitation, to return the art to the BLM.

The rock art wasn’t the first item with a sketchy provenance found at the museum, Lawrence-Smith said: Fossilized remains of a complete ichthyosaur, discovered near Lovell, were also in the museum’s possession and given back to the government. It was after finding the ancient dinosaur bones in the Quonset hut that Lawrence-Smith dug deeper and found the petroglyphs.

“We want to do the right thing and return things we shouldn’t have,” Lawrence-Smith said.

Ownership of artifacts remains a hotly debated subject in museums around the world and many famous treasures have been the subjects of controversies. Whether looted, acquired as spoils of war or purchased from presumed owners prior to current ethics standards, a number of museums have either returned artifacts to the proper owners or been challenged on their right to ownership of artifacts in court.

Many institutions have made it a policy to return artifacts to their rightful origins. But one famous case — concerning Greek marble statues taken from the Parthenon in the early 1800s — has kept the debate alive. Claiming it saved the sculptures, the British Museum refuses to return the cultural icons. Some have called the acquisition more pillage than preservation.

“Looting has been going on for thousands of years,” Lawrence-Smith said. “Who, if anyone, owns the past? Who has the right or responsibility to preserve cultural remains?”

All but one fragment of the Greybull South discoveries are now in the BLM’s hands. One of the sandstone slabs remains on loan to the Buffalo Bill Center of the West after it was “discovered in plain sight,” having been on display in the center’s Plains Indian Museum all those years.

The BLM promptly shipped the returned artifacts to the University of Wyoming, where they’re being researched and carefully stored in climate-controlled storage.

“There is a separate bag of fragments that we have cataloged that will probably never get re-attached to anything but is indicative of the quickly deteriorating condition of the panels,” said Marieka Arksey, collections manager for the University of Wyoming Archaeological Repository.

Archaeologists now hope to build a digital reconstruction of the cliff face where the petroglyphs once resided, using reflectance transformation imaging and photogrammetry.

The results will be used as “a key case study through which to open a dialog with the public on site vandalism, preservation, and continued public access to collections,” according to the grant proposal.

Arksey worked with Chad Hutchens, head of digital collections at the University, on the funding application to digitize the pieces. Graduate student Morgan Robins, of Lander, has already started developing a digitization workflow — testing out different photogrammetry specifications on one of the fragments. Funding has been provided through a Humanities Research Group grant through the UW’s Wyoming Institute for Humanities Research.

“This project will provide the means to preserve this collection and reconstruct this public site for the benefit of both researchers and the public,” Arksey said, “and thereby help to bring awareness of cultural heritage management to a wider audience.”