When Ryan Davis and his family went shopping for a new place to live last year —  looking at several different states across the country — it was Powell, Wyoming, that won … 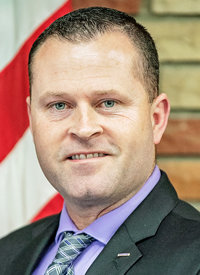 Ryan Davis is the Powell Police Department’s newest officer. Prior to coming to Powell, he served as a deputy with the Amador County, California, Sheriff’s Office.
Tribune photo by Carla Wensky
By CJ Baker

When Ryan Davis and his family went shopping for a new place to live last year —  looking at several different states across the country — it was Powell, Wyoming, that won out.

“Once I visited, it was a clear choice that this is where we wanted to be,” Davis said.

He was sworn in as the Powell Police Department’s newest officer at last week’s city council meeting, while his wife and two children will be making the move from the Sacramento area at the end of the school year.

“We were very excited to live out here, be a part of the Powell community,” said Davis.

He comes to the department with both military and law enforcement experience.

Davis spent 11 years in the U.S. Army National Guard, including three years on active orders and a combat deployment to Afghanistan; he was awarded both a Purple Heart and an Army Commendation Medal for his service overseas.

More recently, he spent more than six-and-a-half years as a sheriff’s deputy in California.

Davis started out in construction, as the owner of a restoration company, but as the economy turned in 2007, he changed course.

“I found law enforcement and never looked back,” he said. The 38-year-old said he enjoys the interaction with people and trying to help solve problems.

“My main philosophy in law enforcement is to improve the lives of the citizens that I serve,” he said, whether that be sharing a cup of coffee, investigating a burglary or assisting someone in a crisis.

“Most times when people meet cops it’s the worst day of their life,” Davis said, and he tries to treat people in the same way he’d want an officer to treat his family.

Davis previously worked as a deputy with the Amador County, California, Sheriff’s Office, helping to patrol the 600-square mile area and serve its roughly 38,500 residents.

The county lies east of Sacramento and south of Lake Tahoe in the Sierra Nevada Mountains. While it was busier than Powell and offered a breadth of experiences, he also regularly handled more mundane calls for assistance, such as issues with dogs, cows, horses or other animals.

“It’s not going to be too far off,” Davis said of what he’ll handle in Powell.

Amador County is a rural ranching and logging community and a law enforcement-friendly place, Davis said. However, he felt it was only a matter of time before overreaching state government policies in California made their way into the community.

As the family looked for a new place, it was a friend in Powell — a veteran Davis served alongside in Afghanistan — who put northwest Wyoming on their radar. They visited last summer and “kind of fell in love with the place,” he said.

Beyond appreciating the tight-knit community, family-friendly atmosphere and school system, Davis has enjoyed learning the history of the area. While his family members won’t be in Powell for a couple more months, Davis’ son is already reading a book about Buffalo Bill Cody and “is bound and determined to work at the Cody [Nite] Rodeo,” he said. The 7-year-old is specifically interested in being “the guy that pulls the gate open” for the bucking broncs and bulls, but Davis has warned him that he probably can’t start out in that position.

Davis’ wife and children aren’t the only family members planning an imminent move to Powell, either: Davis said his parents plan to retire here as well.

Davis was hired in December to fill a position that had been vacant since June, when Officer Kade Richmond left the department. However, the Powell Police Department still remains down one position, as Officer David Ferguson retired in January. The department is currently working to fill that post.