Grizzly bears are dying at a record pace in the Greater Yellowstone Ecosystem, but wildlife officials say that’s a sign of a population that has reached its carrying capacity. The leader of the … 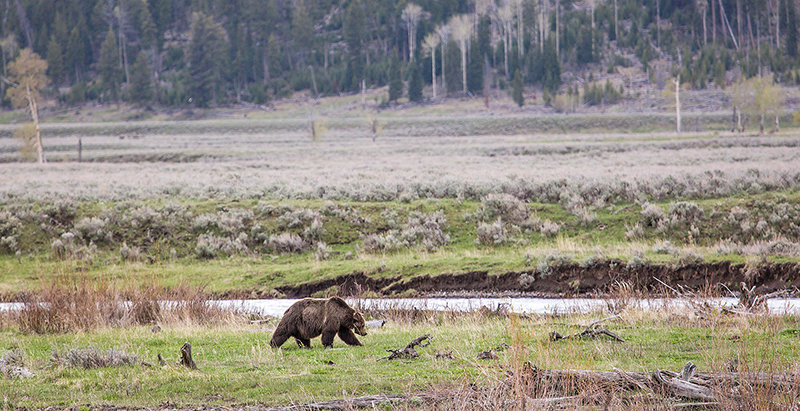 A collared grizzly bear roams the Lamar Valley of Yellowstone National Park in this file photo. The number of documented grizzly bear deaths in the Greater Yellowstone Ecosystem has risen this year, but the estimated population is also at a record high.
Photo courtesy Neal Herbert, National Park Service
Posted Friday, November 12, 2021 8:25 am
By Mark Davis

Grizzly bears are dying at a record pace in the Greater Yellowstone Ecosystem, but wildlife officials say that’s a sign of a population that has reached its carrying capacity. The leader of the Interagency Grizzly Bear Study Team said this week that, despite the deaths, the grizzly population appears to be growing.

There have been 63 known grizzly bear mortalities in the three-state area in 2021, according to the study team, with 42 deaths reported inside the primary conservation area for the species.

Of the deaths within the Demographic Monitoring Area (DMA), 30 were in Wyoming, including 18 euthanized in management decisions. There were also 21 deaths reported outside the DMA, including 13 management removals in Wyoming.

In 2018, a record 32 grizzly bears were euthanized in Wyoming in management decisions by the U.S. Fish and Wildlife Service. That record could be challenged this year. The most recent report of known and suspected grizzly bear mortalities was published Nov. 4 and the ongoing hunting season, plus the species’ natural drive to fill up before hibernation, typically brings additional human-bear conflicts.

The Fish and Wildlife Service makes all final management decisions on relocations and removals of grizzly bears while they are listed for protections under the Endangered Species Act.

Wyoming Game and Fish large carnivore team leader Dan Thompson isn’t pleased with the sole focus on the number of deaths and removals.

“The use of the term ‘record’ or ‘record high’ is always used when talking about mortality, or removals,” he pointed out. “I never hear the term ‘record high’ when we give the highest population estimate … since tracking them in the 1970s, or highest occupied range of grizzly bears in the GYE since perhaps the 1800s.”

“Records without context lead to false narratives,” Thompson said, adding, “One thing that is continually lost is that there is a focus on mortality, but we don’t talk about reproduction and the several hundred cubs that are born every year and overall high survival rates.”

The Interagency Grizzly Bear Study Team estimates the current population inside the DMA at 1,069 bears, which is a record high population estimate from the team, although the team changed how it makes the estimates in the spring. The low side of their estimate is 953 bears, with a high of 1,184.

Population estimates are not kept outside the conservation zone, but grizzly bears euthanized outside the DMA account for about a third of all lethal removals, according to Frank van Manen, leader of the study team.

Despite the recent removals inside the DMA, van Manen said data shows an increasing population in the ecosystem.

“If you look at the dependent yearling cubs, there are well over 300, and that indicates really solid recruitment into this population,” he said at a Yellowstone Ecosystem Subcommittee meeting Monday.

Overall mortality is still within set limits for the species, he said. “Our mortality rates were below a threshold of 5.7% for independent females and 8.1% of independent males.”

The subcommittee works in cooperation with the Interagency Grizzly Bear Study Team, an interdisciplinary group of scientists and biologists responsible for long-term monitoring and research efforts on grizzly bears in the Greater Yellowstone Ecosystem. The team was formed by the Department of the Interior in 1973, with representatives from the U.S. Geological Survey, National Park Service, U.S. Fish and Wildlife Service, U.S. Forest Service, the Eastern Shoshone and Northern Arapaho Tribal Fish and Game Department, and the states of Idaho, Montana and Wyoming.

The interagency approach was used to ensure consistency in data collection and allows for combining limited resources to address needs throughout grizzly bear habitat. However, they are not a governing body or legal authority, said Fish and Wildlife Service biologist Jennifer Fortin-Noreus.

While managers are sometimes forced to turn to euthanizations, there are several non-lethal programs in progress including electric fencing and hazing efforts.

Mike Foster, director of the U.S. Department of Agriculture’s Wildlife Services in Wyoming, said his agency is working on a hazing wagon to help control conflicts.

“It will help for the first few days or a week until we can figure out something else to do,” he said.

Foster picked up the idea from the Park County Predator Management Advisory Board, including board member Shane Smith of Powell. Solar panels power the trailers, which are set by timers to activate periodically during the night. Building the apparatus in the back of a trailer allows it to be moved to fields as needed to stem livestock losses.

Meanwhile, “We’ve strung miles and miles of electric fence around chicken coops, and feed yards and pig pens, and you name it,” said Jim White, Idaho Department of Fish and Game regional supervisor.

He added that, “this non lethal work has prevented a tremendous amount of damage and saved a lot of control work.”

As more and more visitors pour into the Greater Yellowstone Ecosystem, the need for services and developed spaces increases. More development might seem to be a conflict for officials charged with conserving grizzly bears and their habitat, but they are aware of the needs of the ever- increasing stream of humanity heading this direction and what it means to the endangered species.

Soon the two efforts will meet, as proposed policy changes in the region’s conservation strategy are likely to be updated for the first time in more than a dozen years. The changes allow for more overnight visitors, improvements in developed areas and along roads, as well as other changes to infrastructure within core grizzly bear habitat known as the Demographic Monitoring Area (DMA).

The Yellowstone Ecosystem Subcommittee of the Interagency Grizzly Bear Study Team is poised to have a final vote on changes this spring, after a working draft was presented for public comment during the group’s fall session on Tuesday.

Those seeking to comment on the draft revisions for Chapter 3 have had lots of time to consider their input. The debate has been active since 2016 and seemingly lingering in bureaucracy since.

About 98% of grizzly habitat in the Greater Yellowstone Ecosystem and the boundaries of the recovery zone falls within the borders of national parks and forests. The proposed plan gains ground without a net loss of grizzly habitat, said Jennifer Fortin-Noreus, biologist for the U.S. Fish and Wildlife Service.

The change is in how developed areas are calculated. Instead of requiring mitigation for every change of one of hundreds of points on a map, each development is measured by its actual footprint. Space for further development is realized within the spatial constraints of the footprints.

She also pointed out that, while managers are in charge of protecting habitat, they can’t turn off the increasing stream of visitors.

“We don’t control increased visitation on the national forest,” she said. “We don’t have some automatic way to tell people to stop coming.”

The plan allows for some development without actually requiring the use of tracts of non-developed land. “It gives us the management tools to focus some of our use and concentration in those [realized] areas, and perhaps not in our dispersed sites that can cause more impact,” Fortin-Noreus said.

Those working on the plan see a lot of upside for managers and visitors alike.

“I think it is a really good product,” said Tricia O’Connor, supervisor of the Bridger-Teton National Forest.

“[It] is trying to thread that needle around, having some management flexibility around developed sites, but doing it carefully with some oversight so that it’s not just you can do whatever you want, wherever you want.”

While the plan was discussed in a public, online meeting, the committee didn’t take formal public comments after the presentation, but did take questions. Bonnie Rice, senior representative for the Sierra Club’s Greater Yellowstone/Northern Rockies campaign, Rice was the only member of the public to speak during the open mic period. She said that more people making overnight stays “obviously raises the number of potential conflicts.”