From Peru to Yellowtail

It’s a job that most would refuse. As a matter of fact, Elvis’ job was offered first to American workers. But none applied, according to Lisa Kimsey, CEO of Big Horn Basin Boers, a sheep and goat ranching operation.

“Even if I offered three …

From Peru to Yellowtail 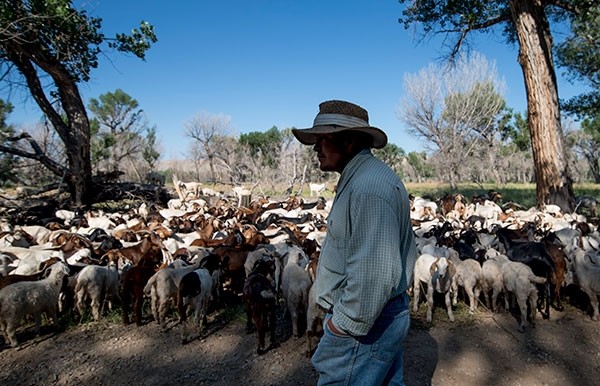 Elvis Garcia, a Peruvian goat herder in the U.S. on an H-2A work visa, watches more than 450 nanny goats and their kids while running the herd over the Yellowtail Wildlife Management Area. It’s part of an effort to control invasive, noxious weeds as an alternative to herbicides. In 2018, Garcia will receive a raise, as a Department of Labor rule increases shepherd pay from $1,200 per month to $1,500.
Tribune photos by Mark Davis 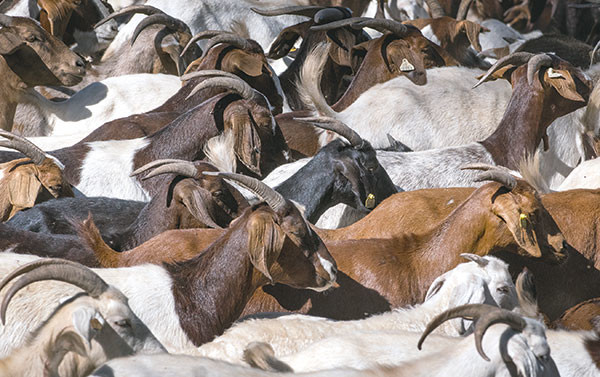 More than 450 nanny goats and their kids work the Yellowtail Wildlife Management Area, munching on invasive species of weeds. 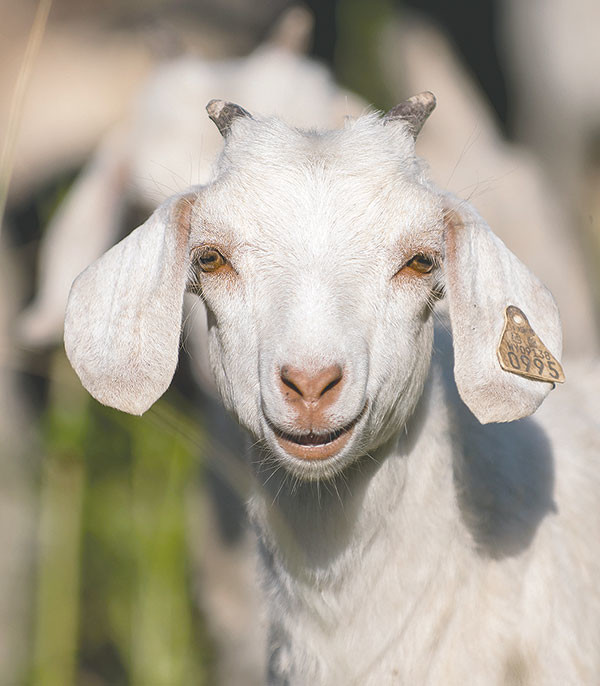 A kid appears to smile while munching on Russian knapweed, an invasive species that is hard to control. 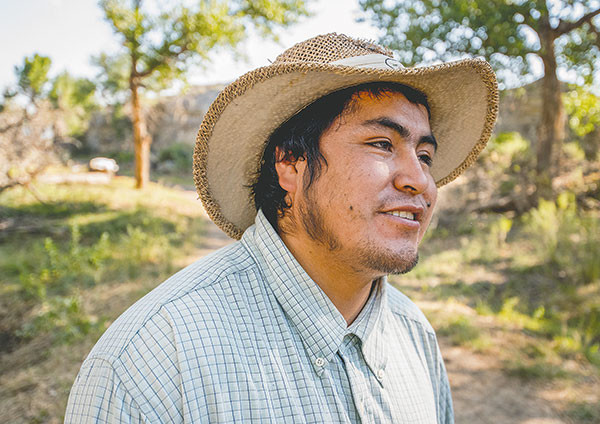 Elvis Garcia, a Peruvian goat herder in the U.S. on a H-2A work visa, watches more than 450 nanny goats and their kids while running the herd over the Yellowtail Wildlife Management Area in an effort to control invasive, noxious weeds as an alternative to herbicides. 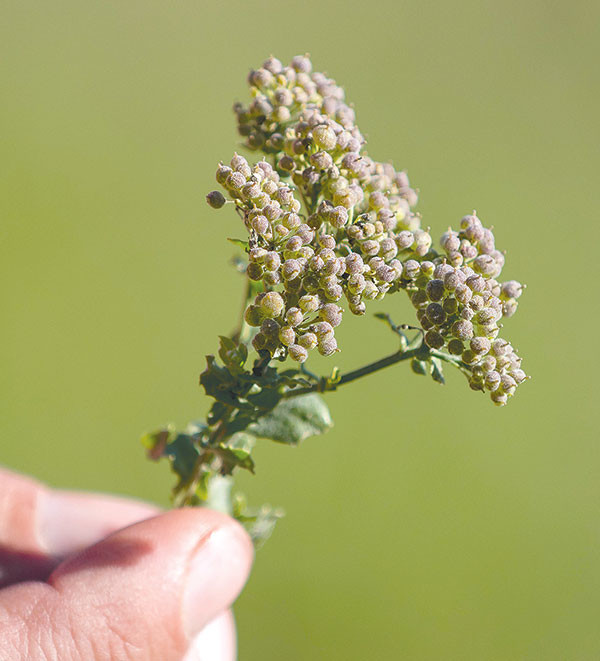 Whitetop is a toxic invasive species that is resistant to herbicide and a favorite food of goats.
Previous Next
Posted Thursday, July 13, 2017 2:42 pm
By Mark Davis

Out in the heat, amongst rattlesnakes and more skeeters than most people can stand, a Peruvian man named Elvis and his constant companion, a Welsh collie named Pepsi, tend to 450 nannies and their kids.

It’s a job that most would refuse. As a matter of fact, Elvis’ job was offered first to American workers. But none applied, according to Lisa Kimsey, CEO of Big Horn Basin Boers, a sheep and goat ranching operation.

“Even if I offered three times more money, I couldn’t get locals to apply,” Kimsey said.

The swarm of mosquitos would drive most people mad. But it’s not the hardest part of the job for Elvis Garcia, who has been tending goats at the Yellowtail Wildlife Management Area east of Lovell for more than two years. Loneliness is the job’s main foe. Garcia has a wife and 6-year-old daughter back in Peru. And although Kimsey, his employer, supplies Garcia with a cell phone and wireless access, making it easy to communicate with his family and friends, nothing can replace holding your wife and child.

“Every day I miss Miriam and Simara, but you adapt,” Garcia said. The family is from the Huachupampa District, in the Huarochirí province in central Peru.

Garcia took three buses for 10 hours before he got to the airport in Lima, Peru. The flight was one of the highlights in his life, right next to seeing America. His employment options, if he stayed in Peru, are tough. He was working in a subterranean mine prior to becoming a goat herder. The working conditions are tough and the health hazards many in a country that has fewer safety regulations governing the mining industry. Here, he breathes fresh air and has plenty to eat. He is concerned that he has gained weight, but there are no friends nearby for a pick-up game of futbol (soccer).

Almost every penny Garcia earns is sent home to his family to help send his daughter to school and for basic necessities. His needs here are few, as Kimsey supplies him with room and board. Occasionally he goes to Cody for new clothes, which get chewed up in the rugged terrain south of the Bighorn Canyon National Recreation Area.

Garcia is one of more than 1,600 Peruvian herders in nine western states, including Wyoming, here on H-2A work visas, which allow them to stay in the U.S. for three years at a time to work as herders for sheep and goat ranchers. Garcia is on his second visa, transferring to Kimsey’s crew after having language barrier issues with his first employer.

Kimsey subcontracts more than 450 nannies and their kids to the Wyoming Game and Fish Department to help maintain a grip on invasive species growing on state-managed land. The Game and Fish, in cooperation with the University of Wyoming, is currently running a three-year research project to quantify the impact weed-eating goats have on the worst of the area invasives, Russian knapweed. There are many invasive weeds with which to contend, but it was necessary to narrow the research.

“With the resources we have, it would be too hard to study the impact on all of the invasive species,” said Jerry Altermatt, terrestrial habitat biologist for the Game and Fish department.

In the research project, a controlled number of goats are released into previously ungrazed 30’ x 60’ fenced cells. The cells are then clipped twice to find out how much biomass the goats remove. The project, which started in 2016, has the funding to run for a total of three years. But Altermatt hopes to find additional funding to extend the study for at least 10 years. It takes multiple years of grazing to effect the target plants, according to Altermatt.

“Most people have the misconception of goats as eating the paint off your car,” said Kimsey, a third-generation sheep rancher. Goats aren’t grass eaters and seem to leave cottonwood starts alone as well, she said.

But they eat weeds — the kind that are choking the life out of this beautiful area managed by the Game and Fish department.

“We know they do good work, but it’ll be nice to have it backed up with data,” Kimsey said. She owns more than 1,500 hungry, weed-eating nannies and is also subcontracting with Montana to help mow down invasives near Deer Lodge, in the southwest portion of the state.

The exciting news about using goats is, they maw through some of the weeds like whitetop, where herbicides were ineffective, Altermatt said. The weed is toxic to cattle, but goats love to dine on it in the spring, when it’s just getting started, and in fall, when it’s seeding.

The goats are a natural alternative, Altermatt said. And while herbicides might also need to be deployed in some areas, the grazers cut down on the use of pesticides and hopefully will save money in the long run.

“A good mechanic never shows up with one tool in his toolbox,” Kimsey said, admitting the goats may not be the only solution needed to rid the area of invasive, noxious weeds. “We’re trying to be as good to the environment as we can.”

The number of herders able to travel to the West declined due to the sheep market crashing in 2012. There has also been increased pressure from predators, including coyotes and bears, and some concern that the large numbers of goats could spread disease to bighorn sheep — a prized wild species important to the tourist industry, according to Kimsey.

“Many of the people that employ them have gotten out of the business,” she said. “After the sheep market crash, ranchers could hardly get rid of their lambs.”

There were as many as 2,500 Peruvian herders employed in the U.S. before the crash, according to Kimsey. She hopes more people see the environmental and financial advantages of herds of goats and their keepers.

“It’s one of the few programs in our government that allows people to go out and do meaningful work without the government having their fingers in it,” she said.

Garcia isn’t worried about the future. He lives day by day and tries not to worry. When asked what he will do at the end of his current contract, the man of few words said, “Only God knows.”