A Powell game bird farm has been given the sole right to raise greater sage grouse in the state by the Wyoming Game and Fish Commission. 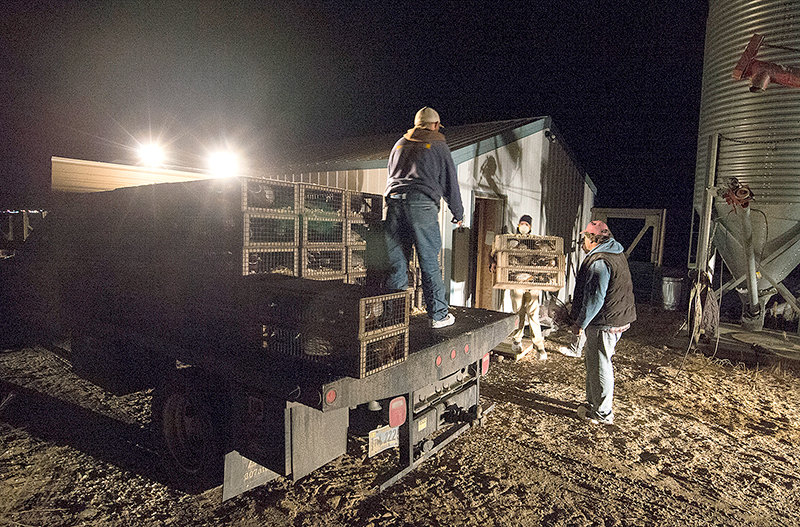 Karl Bear and his crew work to load a truck with game birds after dark at the Diamond Wings Gamebird Farm in Powell. The farm was recently named as the only entity to be able to raise sage grouse in the state.
Tribune photo by Mark Davis 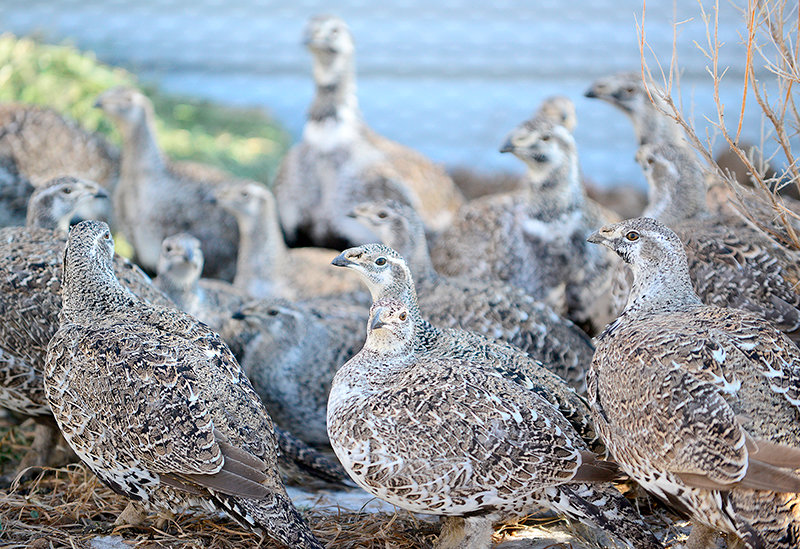 Pen-raised greater sage grouse at the Powell bird farm have done well, with more than 50 birds in the first year broodstock after the farm collected wild eggs from nests in northwest Wyoming last year.
Tribune photo by Mark Davis
Previous Next
Posted Tuesday, November 22, 2022 8:25 am
By Mark Davis

A Powell game bird farm has been given the sole right to raise greater sage grouse in the state by the Wyoming Game and Fish Commission.

The commission discussed the issue briefly Tuesday afternoon during its meeting in Rock Springs. Commissioners moved to update Chapter 60 regulations to match the five-year extension granted by state legislators to certified game bird farms to rear and breed the wild species in decline through the end of 2027.

They then unanimously voted to change the language of the regulation from up to five game bird farms that could be certified to just the one already granted to Powell resident Karl Bear and the Diamond Wings Upland Game Birds, LLC, farm. While the move seemingly singles out the for-profit farm, Bear has been the only qualified individual to apply to raise the species since the Legislature passed the original bill allowing for the collection of wild eggs in 2017.

Bear’s farm has been certified each of the past five years, but it took until 2021 before they were able to find viable eggs during spring attempts overseen by Game and Fish. Last year they were able raise about 50 grouse in flight pens at the farm, which then bred this past spring, giving the farm their first additions to the brood stock after they at least temporarily called off their hunts for more wild eggs.

Meghan Riley, public lands and wildlife advocate for the Wyoming Outdoor Council, asked the department to reveal the number of live birds now in captivity at the farm, but the report from Diamond Wings isn’t due until April 15, at which time they will have the statistics available, according to Rick King, chief of the department’s wildlife division.

Bear said in an interview after the commission meeting that 2022 has been a “very good year” for the project, but declined to comment on the exact number of birds now being raised at the property.

“We had a good fertility and hatch rates this year,” he said.

The process has not been easy, he said. He has battled through numerous issues, from predators targeting the birds to disease since the first hatching from wild eggs in 2021. One of their most recent fortunes for the farm was avoiding an aggressive strain of bird flu at the farm which had devastated farm-raised and wild flocks this past year across the nation. The state often tests Bear’s birds for health issues.

The state was not so lucky, as it had to destroy its flock of pheasants at the Sheridan bird farm and starting from scratch “out of an abundance of caution” earlier this year when several dead wild birds were discovered near the facility.

When the extension was granted by the Legislature, lines of critics came forward to speak out against the private experiment, including the Wyoming Outdoor Council. At Tuesday’s commission meeting only two organizations stepped forward to speak, both in support of limiting certifications to Bear’s operation.

“We would like to voice our wholehearted support for the department’s edits to limit the number of game farms from five down to one, and to limit the farms and operations to one that’s currently permitted,” Riley said.

Bear said he knows the ‘wholehearted’ support for the new rule isn’t exactly a sign the scientific community has decided to back his efforts. But, as always he will push on in the experiment, he promised.