County sticks with its custodians

A pair of local cleaning companies say they could save taxpayers tens of thousands of dollars a year if they were given the chance to take over Park County’s custodial services.

County sticks with its custodians 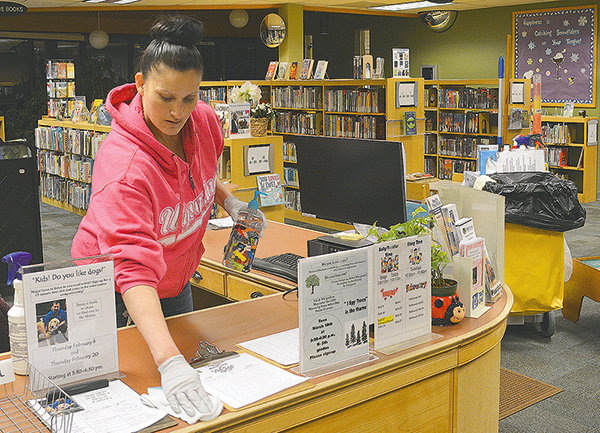 Alejandra Burichka, a Park County custodial worker, tidies up the children’s desk at the Powell Library on the evening of Feb. 11. Earlier in the day, county commissioners decided that they will not turn the county’s custodial work over to a private firm at this time.
Tribune photo by CJ Baker
Posted Tuesday, February 25, 2020 8:25 am
By CJ Baker

A pair of local cleaning companies say they could save taxpayers tens of thousands of dollars a year if they were given the chance to take over Park County’s custodial services.

However, county commissioners decided last week that now is not the right time to pursue the idea, considering it too drastic and uncertain a step, too soon.

While the county is looking for savings to close a budget deficit, commissioners expressed concerns about whether the estimated savings from switching to a private contractor would materialize, if the quality of service might change and what impact a switch would have on the 15 employees who currently clean the county’s buildings.

“At some point in time, I think we may have to take a serious look at it,” Commission Chairman Joe Tilden said at the Feb. 18 meeting. “But right now I think it’s very premature.”

Tilden said the county’s custodians’ jobs “are secure. Period. End of story,” and that the issue was “over with.”

Still, commissioners indicated they would consider either downsizing or partially privatizing the custodial staff when positions happen to become open in the future.

Commissioner Lloyd Thiel first publicly raised the possibility of privatization at a budget workshop in January, announcing that he’d been exploring the concept for months and was working with some companies. Unease followed.

“… it’s caused a hell of a lot of heartache in the county [government],” Tilden said last week.

After it became public that the county might turn its janitorial services over to a contractor, one custodian left for another job; Park County Buildings and Grounds Superintendent Mike Garza said last week that others were “ready to jump ship.” He asked commissioners to put their fears at ease “so that they aren’t losing sleep and looking for other employment in the next 12 months.”

Thiel apologized for “causing so much turmoil,” and asked his fellow commissioners how he might have handled it differently, but he stood by the soundness of privatizing or downsizing the custodial services.

Thiel said Northwest College cleans about twice the square footage with the same amount of staff, though other county officials questioned if that was an “apples to apples” comparison. The county employs 13 full-time and two part-time custodians, after eliminating one part-time position.

“... I do believe after looking at the numbers ... and the people that we have, that we are overstaffed,” Thiel said, adding later that, “I know there’s money there to be saved.”

Powell-based Hunter Clean Care estimated that it could save the county around $60,000 in the first year and potentially more after that, while Commercial Cleaning of Powell suggested it could do the work for $110,000 less than what the county currently pays.

However, Garza warned commissioners that the savings would not be that large. Because of the drug testing that the custodians undergo, the county gets a roughly $23,500 a year discount on its workers’ compensation insurance; that would go away if they’re no longer employed by the county, Garza said, narrowing the annual savings to between $36,500 and $86,500.

Commissioner Tilden was also dismissive of the rough estimates provided by the two companies, suggesting they “probably won’t be able to produce” those savings; and Commissioner Jake Fulkerson said he’d “lost faith in the numbers” after the two firms revised their initial estimates, amid some confusion over what the county was looking for.

For their parts, Commercial Cleaning owner Eric Mooren and Hunter Clean Care co-owner Auston Hunter said in separate interviews they were confident in the numbers they ultimately provided to the county.

The companies initially guessed they would charge between $650,000 and $725,000 a year to clean the buildings the same way that the county does, which effectively offered no savings. But they later gave Thiel new figures, based on cleaning the buildings on the schedules they best saw fit.

Neither estimate was a formal bid; had commissioners opted to move forward with privatization, they would have issued an official request for proposals, opening the job up to any companies interested.

Mooren, who owns Commercial Cleaning, figured that part of the savings would come from employees covering more square footage. And although they’d make a higher wage with his company, any county employees who transferred to his business would receive fewer benefits, as he doesn’t provide  health insurance.

Hunter said his business could do the county work more cheaply through access to additional equipment and by changing up the staffing schedules.

For instance, Hunter said that, in some cases, he would end the county’s practice of having one person assigned to a single building. (For instance, one custodian spends eight hours a shift, five nights a week cleaning the Powell Library; another takes care of the Park County Annex and Powell road and bridge shop; while another handles the Cody Law Enforcement Center, which includes the jail, Garza said.)

“It would be more just utilizing our resources a little better and being able to use our man-hours in a more efficient manner to bring them down,” Hunter said in an interview; he suggested some buildings might need a deep cleaning only two or three nights a week and general maintenance cleaning on the other nights.

At last week’s meeting, Garza said he was open to reducing the county’s standard of service, but argued that his department should be allowed to make those changes before turning the whole operation over to a private business.

Commissioner Dossie Overfield said she preferred looking at those kinds of smaller, internal changes — like potentially shedding a couple positions through attrition — “before we go to losing a department.”

“And in my mind, if we lose the department, and we don’t like what we get, it’s going to take a long time to build that department back,” Overfield said.

She also echoed some unease from other county leaders about the potential of having new cleaners who aren’t county employees.

Another underlying concern was the impact privatization might have on the current custodians, potentially putting some out of work or causing them to lose benefits.

Commissioners Fulkerson and Tilden faulted Thiel for announcing the idea at a public meeting and said they had not known Thiel had been exploring the possibility until his public announcement.

“There was no thought process,” chided Fulkerson.

Records do show that Thiel had notified the commissioners of his intent to explore privatization all the way back in a July 24 email, around the time he first approached Hunter Clean Care.

Thiel said in an interview that he got no response to the message and was later told to hand the idea off to the county’s budget committee — “and the committee did nothing.”

Tilden, who chaired that committee, apologized, but said he doesn’t remember the conversation. “Maybe I’m at fault,” he offered.

In any event, once the possibility of privatization became public, the future of the custodial staff was suddenly up in the air.

Chairman Tilden later called a meeting with the custodians and offered his “personal guarantee” that the commissioners would do everything in their power to protect their jobs, calling them the county’s “unsung heroes” and praising their work.

Last week, Tilden recalled one worker saying how important the job was for her, helping her care for a sick child.

“I fully get it, I do,” Thiel responded, “But my number one person I answer to is everybody else out there that pays the taxes — and they’re asking us to run as efficiently as possible and as lean as possible ...”

While the county is searching for cuts, Park County Clerk Colleen Renner argued it was “way too soon” to eliminate jobs, noting that no one knows how the county’s upcoming budget will turn out. She also suggested the county could again dip into its $16 million reserve account — especially if voters approve an additional 1 percent sales tax for local governments this fall.

“I think there’s other things we need to look at instead of just outsourcing our things that have helped our communities here for many, many years,” Renner said.

Although they nixed the idea for the time being, commissioners indicated that they could take it up again — and both Mooren at Commercial Cleaning and Hunter at Hunter Clean Care said they’d be interested if the county again got serious.

In the meantime, Garza is exploring the idea of turning the county’s groundskeeping at the Park County Complex, courthouse and drug court over to a private contractor; that move, he told commissioners, would involve eliminating one full time and one seasonal position and potentially save more than $40,000; Commissioner Fulkerson called the switch a “no-brainer.”