A slow start to the season has been met with a furious midseason rally by the Northwest College women’s basketball team. The Trappers pushed their way to a winning record for the first time … 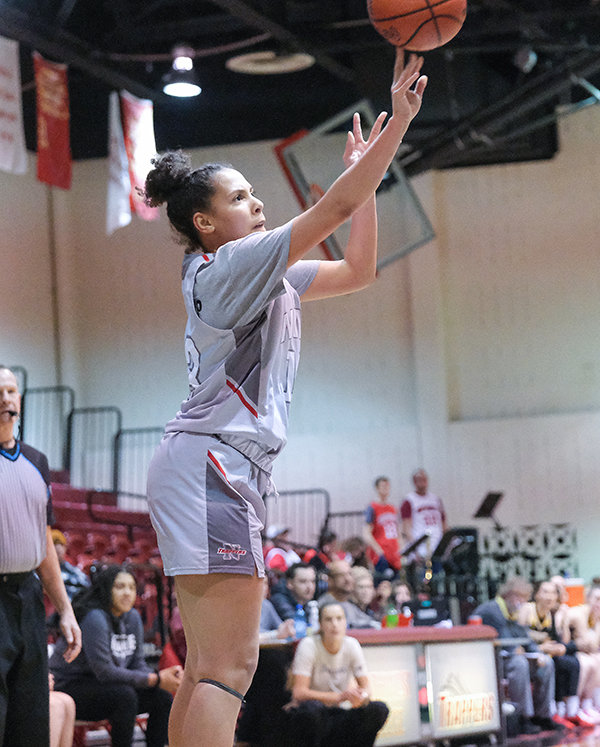 Trapper sophomore Kierra Cutright puts up a jumper late in a Jan. 22 contest against Eastern Wyoming. Cutright posted a double-double and the Trappers posted their second conference win on Thursday against Western Wyoming.
Tribune photo by Seth Romsa 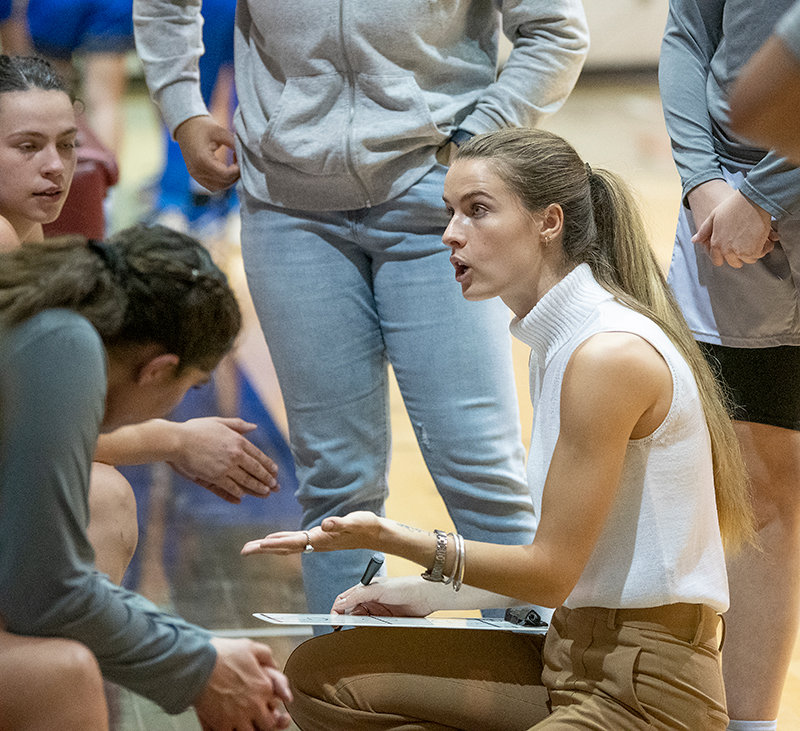 First-year Tapper head coach Lauren Davis tries to motivate her team during a time out against Miles City on Jan. 14. At 10-9, Davis and the Trappers have their first winning record of the season after a 1-5 start.
Tribune photo by Seth Romsa
Previous Next
Posted Thursday, February 3, 2022 8:15 am
By Seth Romsa

A slow start to the season has been met with a furious midseason rally by the Northwest College women’s basketball team. The Trappers pushed their way to a winning record for the first time this season, winning their sixth game in their last seven attempts with a 67-46 victory at Western Wyoming on Jan. 27.

The game started out close as the Trappers took their first lead 7-6 off a Celina Tress 3-pointer with just over six minutes left in the first quarter.

Tress went on to pour in a season high 23 points for the contest — something head coach Lauren Davis hopes to see more from her guards going forward.

“Celina [Tress] was a huge part of our success against Western,” Davis said. “I want each of our guards to have the confidence to knock down shots and be a bigger part of our offense like Celina did.”

The Trappers held a slim lead into the second quarter, but pushed it to double digits 28-18, with a couple minutes remaining in the half. Western made a small run but Northwest led 31-22 at halftime after outscoring the Mustangs 16-8 in the second quarter.

Northwest used an 8-0 run to start the second half to extend the lead out to 17 points, using an efficient offense with limited turnovers to keep the Mustangs at bay.

“Turnovers, other than rebounds, are our No. 1 point of emphasis this year,” Davis said. “I think the girls are starting to realize how valuable each and every possession truly is.”

Heading into the Western contest, the Trappers were averaging 20.7 turnovers per game but were well below that average with 11 on Jan. 27.

NWC extended its lead out to as many as 20 points in the third quarter, but a small run by Western made it 55-39 going into the fourth.

Maintaining a comfortable lead, the Trappers continued to keep the pressure on. They outscored Western again in the fourth 12-7 and walked away with a 67-46 victory. After a 1-5 start, the NWC women are now above .500 for the first time all season at 10-9.

“The team keeps grinding every day,” Davis said. “We know that every game is a battle, and nothing will come easy; they have adopted this mindset, which I think has allowed success. We want to maintain a winning record and keep getting better.”

Tress led the way with 23 points. Kierra Cutright had a 12-point and 11-rebound double-double, while Nayeli Acosta added 10 points.

The Trappers will play four of their last seven games at home, as a game against Laramie County Community College — which was supposed to be played in Cheyenne on Saturday — was postponed until Feb. 21.