In order to challenge a top ranked team in the country you need to play 40 minutes of quality basketball.

The Trapper women outscored NJCAA No. 16 ranked Casper College in every quarter … 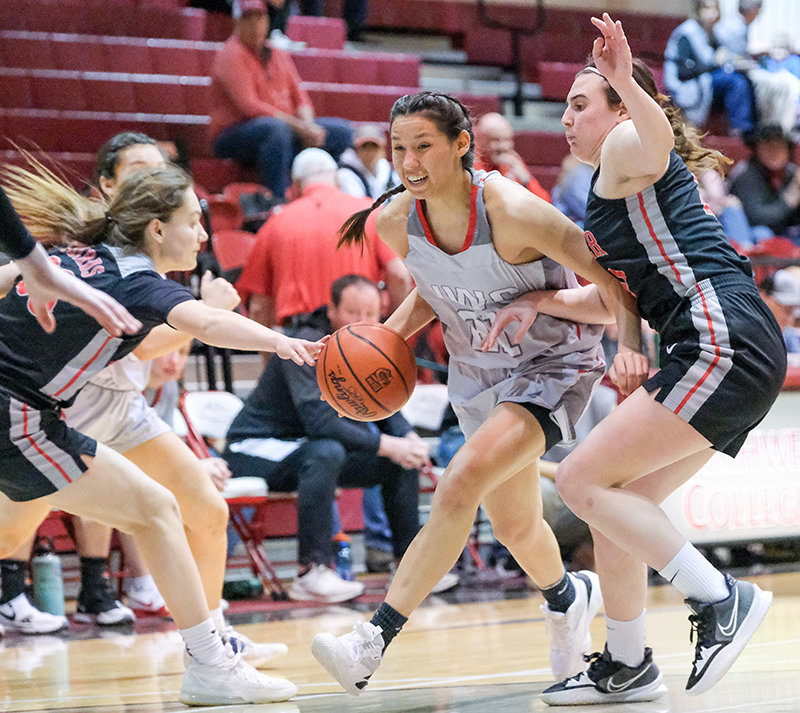 Needing a basket, freshman guard Nayeli Acosta drives in between two Casper College defenders during the second half of their matchup on Saturday. Acosta and the Trappers comeback attempt in the fourth quarter fell just short as they dropped the home contest to the TBirds 75-68.
Tribune photo by Seth Romsa 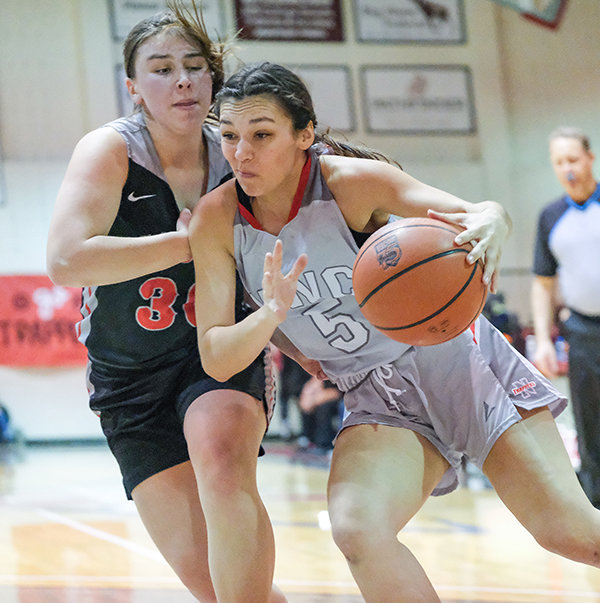 Coming out of the gates strong, NWC freshman Kiana Quintero drives to the basket during the first half of the Trapper’s game against Casper College. The TBirds used a strong third quarter to sink the Trappers as they dropped to 2-2 in region play on Saturday.
Tribune photo by Seth Romsa
Previous Next
Posted Thursday, February 10, 2022 8:20 am
By Seth Romsa

In order to challenge a top ranked team in the country you need to play 40 minutes of quality basketball.

The game started out as if it was heading towards a blowout loss for the Trappers (10-10 overall, 2-2 Region IX North), as the TBirds (21-4 overall, 6-0 Region IX North) came out of the gates forcing three turnovers and outscoring Northwest 7-2 over the first 2:20 of the game.

Northwest responded to the early pressure through the high-low post tandem of sophomore Kierra Cutright and freshman Darla Hernandez as they scored the next 10 points for the Trappers to help give them a 12-11 lead.

Continuing to press the issue on Casper, the Trappers appeared poised to take a three point lead into the second quarter, but an offensive rebound followed by a buzzer beater made it 20-19 at the end of the first.

Despite the buzzer-beating shot, the Trappers came out in the second quarter looking to create some momentum. Two early 3-pointers by freshman Brenna Rouane gave the Trappers a 30-23 lead with 6:43 left.

Efficient shooting in the quarter from all ranges allowed the Trappers to extend their lead out to nine multiple times, but another buzzer beater from the TBirds made it a seven point game going into halftime at 42-35.

Casper College would not go away quietly, as they ramped up the pressure coming out of the locker room.

The TBirds came out in a full court press and created momentum off early turnovers from the Trappers.

A 12-4 run over the first four minutes gave Casper College their first lead of the game since the 4:42 mark in the first quarter.

“I think we are learning how to come out of halftime and not let up even if we have a lead or are down,” Davis said. “We have to come out full throttle and I think having a young team it has taken them awhile to learn that, but I think Casper was a great lesson in how important that is.”

Things did not get easier for Northwest, as they were held 1-5 from the field for the entire quarter after shooting 13-20 the first half.

Fortunately for the Trappers they were 5-8 from the free throw line which had them within striking distance trailing 57-49 going into the fourth quarter.

Casper continued their strong second half play as they extended their lead to a game high 12 points with 7:24 remaining.

Both teams exchanged runs over the next few minutes; which allowed Casper to maintain a 10 point lead in the final minutes.

The Trappers got within five points after a 3-pointer by freshman Kiana Quintero with 2:10 remaining, but Casper instantly responded to extend it to double digits.

The Trappers had four players in double figures, Rouane led the way with 17, followed closely by Hernandez with 16; both Cutright and Celina Tress finished with 10.

Northwest was scheduled to hit the road on Wednesday night as they traveled to Eastern Wyoming to take on the Lancers (14-9 overall, 4-2 Region IX North) who the Trappers defeated at home 64-62 on Jan. 22.

The Trappers will return home on Saturday to take on Western Wyoming (4-19 overall, 0-6 Region IX North) at 2 p.m.

Northwest defeated the Mustangs 67-46 on Jan. 24 in Rock Springs.

The Trappers are currently sitting in a tie with LCCC for third in the north, as both teams currently hold a 2-2 record.

The Trappers have had two games currently postponed due to health problems within both the LCCC and Central Wyoming programs. The game against Central has been rescheduled for Monday, Feb. 21, at 5:30 p.m.

NWC Athletic Director Brian Erickson said they are still working to reschedule the LCCC game but is uncertain if they will have enough time to make up the game.