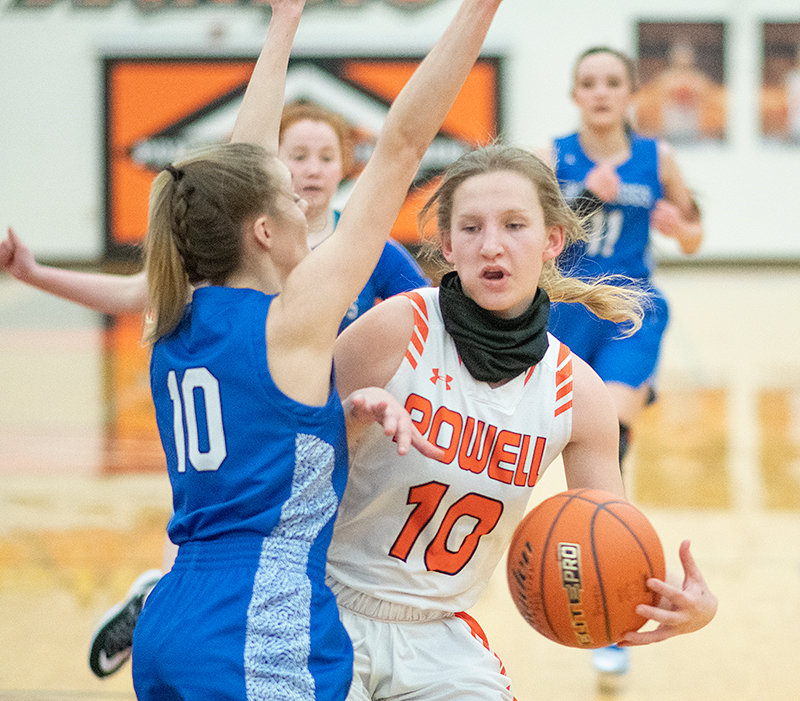 Rose Graft picks up her dribble Friday against Lovell. The Panthers clinched their sixth win of the year against the Bulldogs, doubling their win total from 2019-20.
Tribune photo by Carson Field
Posted Tuesday, March 2, 2021 8:05 am
By Carson Field

The Panthers defeated Lovell 44-35 at home on Friday before dropping a road game against Lander Valley 52-39 on Saturday.

Friday’s win over the Bulldogs was significant improvement from Powell’s first meeting against Lovell, when PHS lost by 12. Facing Rhett Partridge, Lovell’s 6-foot-3 post, the Panthers opted for a different defensive strategy.

“Our defense against Lovell has been zone in the past, so we tried man,” head coach Chelsea Buher said. “We don’t match up well with Rhett because of her height, but we did better this time.”

Powell contained Partridge, who only scored four points, and held Lovell to just 12 points in the first half, leading 25-12.

But after returning from halftime, the Bulldogs found their first offensive rhythm of the game. Lovell cut the Panther lead to just two points in the fourth quarter, as Powell struggled to control the ball.

PHS, however, increased its defensive pressure in the last few minutes to clinch a victory.

“We went back to the press, and that helped,” Buher said. “We started taking care of the ball better, and that allowed us to pull away.”

Sophomore Megan Jacobsen — who shot 5-of-5 from the field — led the Panthers in scoring with 10 points. She was one of eight Powell players who showed up on the score sheet.

A day later, the Panthers started slow against Lander. They scored just 10 points in the first half, trailing by 17 at break.

“We had a tough start there,” Buher said. “I had a lot of players in foul trouble, and that threw a kink in our game plan.”

PHS outscored the Tigers 29-25 in the second half, but it wasn’t enough, as the first-half deficit proved too large. The 52-39 loss dropped PHS to 6-12 to close out the regular season.

Just a few days after the defeat, Powell will get another shot at the Tigers at the 3A West Regional Tournament on Thursday.

In both games against Lander this season, the Panthers showed grit. They led for most of the first contest on Jan. 23, before a fourth-quarter run pushed the Tigers ahead. And on Saturday, Powell found an offensive stride late in the game, outscoring the Tigers in the final two quarters.

Buher knows her team can compete with Lander Valley, the No. 1 seed in Class 3A Northwest, if it competes well for four quarters.

“We can’t have any empty possessions,” Buher said. “If we put together our first half of the first game with the second half of the second game, we can be dangerous. I feel like it’s a good draw.”

The loser-out quadrant contest tips off at 1 p.m. Thursday in Lovell.