After a slow start to the season, the Trapper women’s basketball team is picking up the pace. They completed a weekend sweep on Friday and Saturday, beating both Turtle Mountain Community … 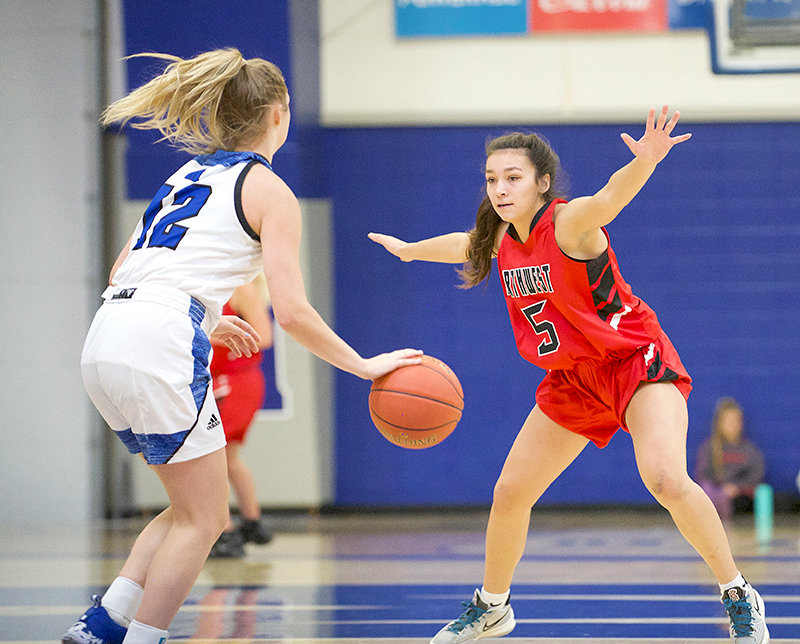 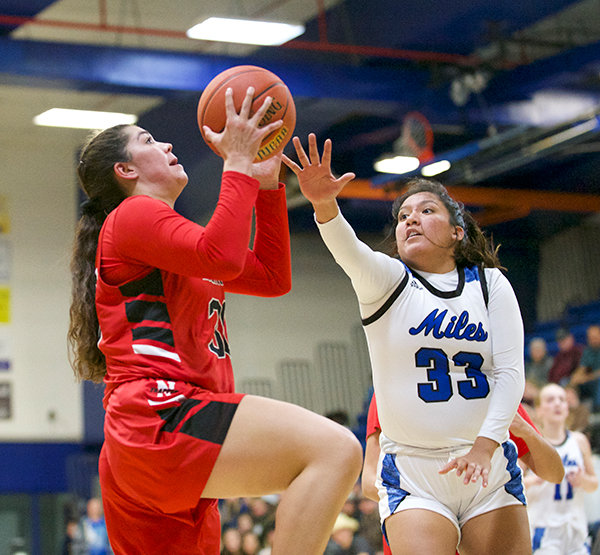 NWC freshman Darla Hernandez goes up for a layup against Miles Community College. The Trappers are set to go on a long road trip with three games in Salt Lake City this weekend before returning home for their home opener.
Tribune photo by Seth Romsa
Previous Next
Posted Tuesday, November 30, 2021 8:20 am
By Seth Romsa

After a slow start to the season, the Trapper women’s basketball team is picking up the pace. They completed a weekend sweep on Friday and Saturday, beating both Turtle Mountain Community College and Williston State at the Williston State Invitational.

Coming off a successful 2-3 road trip to Montana, the Trapper women (4-5) went into their game against Turtle Mountain looking to make a statement.

An offensive rebound and a put-back by freshman Darla Hernandez would be an early indication of the scoring to come as the Trappers scored early and often against the Mighty Mikinocks.

The Trappers built an early 19-9 lead on fast transition baskets, and free throws by sophomore Shante Falslev built the double-digit lead. The contest got no closer than 10 points following the two-minute mark in the first quarter.

The second period saw the Trappers outscore Turtle Mountain 25-8, and take a 52-21 lead into halftime.

The Trappers dominance continued in the second half, as they grew their lead to 73-28 heading into the fourth quarter.

Northwest outscored Turtle Mountain 18-4 in the final period and won by a score of 91-32.

Falslev — along with freshman Jaycie Casebolt and sophomore Celina Tress — have started to work their way into the Trapper rotation, after becoming more comfortable with the motion offense that head coach Lauren Davis wants to run.

“I think they are finally starting to find their role,” Davis said.

With those three added into the rotation, the Trappers have been able to run a rotation up to 10 deep. That’s despite missing sophomore center Tatiana Coleman, who aggravated a knee injury during the team’s Nov. 18 matchup against Miles Community College.

With each Trapper beginning to find their role in the offense more consistently, Davis said they have continued to put emphasis on finding the right shot for the team rather than the first one that is presented.

“We have had a lot of emphasis on utilizing the shot clock and getting the best shot for our team,” Davis said.

After their blowout win over Turtle Mountain on Friday, the Trappers went into Saturday’s contest against hosts Williston State (3-6) looking to extend their win streak to three games.

The contest began close, with the Trappers getting most of their baskets off transition baskets.

“We always talk about getting a stop, a score and a stop,” Davis said, “so in transition is the easiest way for us to score quickly and get back on defense and get another stop.”

After playing to a 6-6 tie just over halfway through the first quarter, the Tetons took a 14-11 lead heading into the second period.

Northwest battled back early in the period, taking a 17-16 lead on a jumper from freshman Nayeli Acosta.

The teams played to a 25-25 deadlock with three minutes remaining in the second quarter.

A 3-pointer by Tress sparked the Trapper offense, as they outscored the Tetons 10-6 to take a 35-31 lead going into halftime.

The second half started out strong for NWC, building the lead to 11 points on a layup by Hernandez, 49-38, with 4:30 remaining in the third.

Williston trimmed the Trapper lead to 57-50 heading into the fourth quarter.

After being quiet for an extended period of time on the offensive side of the floor, Acosta came out firing, scoring five fast points for the Trappers in the first minute of the period to put NWC up 62-50. However, Williston cut it to 70-62 with three minutes remaining, then got within two points in the final minute, aided by a technical on Brenna Rouane.

However, despite scoring just three points in the final three minutes, the Trappers were able to pull out the victory 73-71 and bring their record one closer to .500.

Recalling an earlier season loss to Dawson — in which the Trappers lost the lead the final minutes — Davis knew her team was learning how to finish off victories.

“We are trying to learn what it means to finish a game as far as energy goes and that no lead is safe until that final buzzer goes,” Davis said. “I think the reason we won was an overall team effort.”

The Trappers will head back on the road one final time before they are able to host their home opener the weekend of Dec. 10.

On what will be their longest road trip of the season, the Trappers will head to Salt Lake City to take part in the Salt Lake Community College (SLCC) Basketball Classic.

The weekend will start early on Thursday, as the Trappers will take on an all-star team at 5 p.m.

They will then continue the classic against host SLCC on Friday at 5 p.m. before finishing the weekend against Utah State Eastern on Saturday at 11 a.m.

With the traveling nearly complete for the Trappers, Davis knows this long road trip will help Northwest later in the season.

“Having this tough schedule as far as traveling and the tougher teams will make us ready and more prepared for region games,” Davis said.