Heading into their home matchup on Saturday against Casper College, the Trapper men’s basketball team needed a win to get back in the Region IX picture. Northwest battled to the end, but … 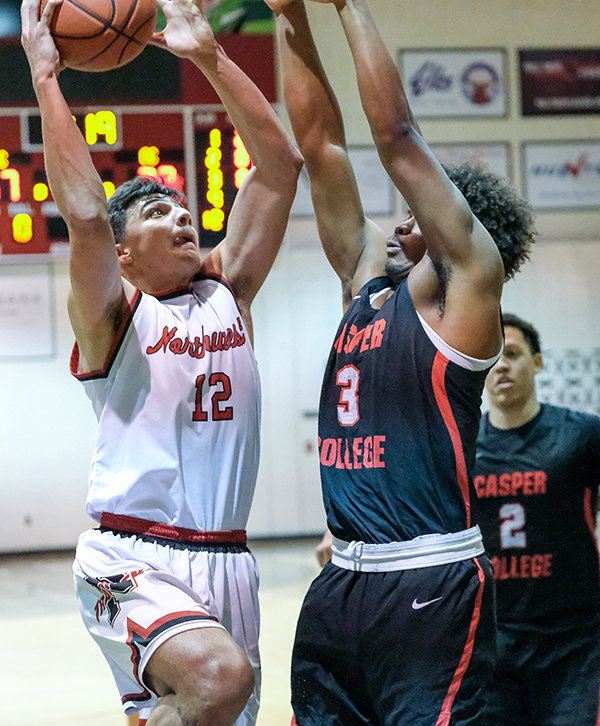 NWC sophomore Gabriel Gutierrez rises up as he looks for a basket late against Casper College, as Northwest tried to make a late comeback on Saturday. The TBirds held off multiple attempts by the Trappers as they defeated Northwest 76-71.
Tribune photo by Seth Romsa 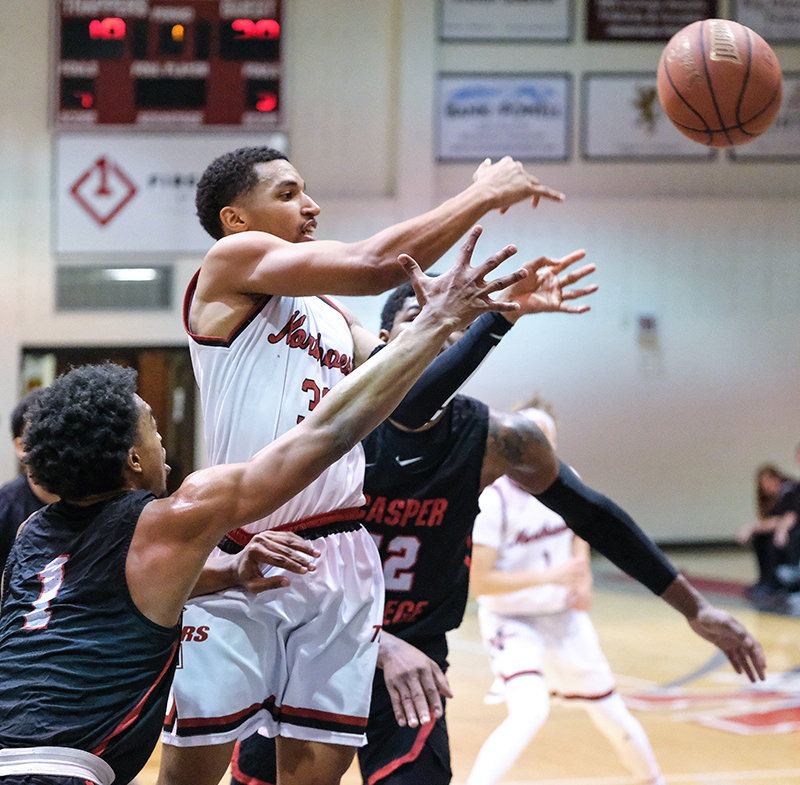 Trapper guard Alan Swenson kicks the ball out during the first half of the Trappers match up with Casper College on Saturday. The sophomore led Northwest with seven assists in the game, as the Trappers will try to bounce back against Eastern Wyoming and Western Wyoming this week.
Tribune photo by Seth Romsa
Previous Next
Posted Thursday, February 10, 2022 8:15 am
By Seth Romsa

Heading into their home matchup on Saturday against Casper College, the Trapper men’s basketball team needed a win to get back in the Region IX picture. Northwest battled to the end, but multiple comeback attempts were staved off by the TBirds as they walked away with a 76-71 victory.

Coming out of the gates, both teams battled end to end — as a 9-9 scoreline left neither side with an advantage with 14:20 left in the first half.

The Trappers were able to hold a lead at 16-14 but were unable to hold that early lead with 11 minutes to go.

Casper responded to the strong start from the Trappers.

The TBirds created a little bit of separation between the two teams as they went on a 14-2 run and held the Trappers to only one basket over a more than seven minute span.

Northwest ended the run when a pass from sophomore Alan Swenson found freshman Juan Camargo for a dunk which jump-started the Trapper offense over the final four minutes.

The Trappers finished the half with a 9-0 run over the last 4:08, as the big man Camargo had 13 points to lead the way for Northwest — trailing 28-27 at halftime.

“We have not been making shots this year and at some point you need to make an adjustment,” Trapper head coach Jay Collins said. “I am not saying we are not going to shoot threes, but if you look at what our big guys have been doing lately they have been shooting a really high percentage.”

Unfortunately for Camargo, as the buzzer sounded he picked up his second foul which played a factor for Northwest early in the second half.

Early in the half, both teams battled back and forth and exchanged baskets until Casper took the lead for good at 32-31.

Casper extended the lead to 34-31, before a sequence of unfortunate events appeared to doom the Trappers.

Casper made a 3-pointer after a missed Northwest basket.

Casper then got the ball back after Camargo was called for an illegal boxout on the shot. Casper took advantage and made another 3-pointer to extend the lead out to nine points at 40-31 in a matter of four seconds.

Camargo picked up his fourth foul just 40 seconds later, which sent him to the bench for more than eight minutes.

Northwest worked their way back into the game after a small 9-3 run before Casper extended their lead to nine at 48-39 with 13:36 remaining.

With the Trappers continuing to trail 51-42, freshman Bryson Stephens and sophomore Gabriel Gutierrez combined to score 10 of the Trappers next 13 points as they worked the game back to one possession at 56-55 with 7:27 remaining.

The TBirds did not allow the Trappers to fully seize the momentum as they extended the lead back out to four off a 3-pointer.

A missed 3-pointer by Gutierrez put the TBirds back on offense, attacking the paint. Camargo picked up his fifth foul with 6:51 remaining. After scoring 13 in the first half, Camargo was held scoreless in the second half.

Appearing to put Camargo back into the game a little earlier than anticipated, Collins stood by his decision to put him back in with seven minutes left.

“I do not want to lose the game in the middle of the game,” Collins said. “He fouled right away which may not look like a good decision now, but I will stand by that decision every time.”

After Camargo fouled out, Casper College extended the lead out to six at 61-55 with 6:05 remaining.

The Trappers were able to cut the lead to a single possession six times over the next five minutes. Despite the attempts, the Trappers were never able to tie or take the lead as Casper College continued to match Northwest basket for basket.

The TBirds finished the game at the free throw line in the final minute as they walked away with a 76-71 victory.

“We could not find a stop down the stretch,” Collins said. “To their credit they stuck a couple of big 3-pointers. We just were not able to make game winning plays and that has been the difference.”

Four Trappers were in double figures as Gutierrez led the way for the Trappers with a 23 point 10 rebound double double, Stephens scored 17 followed by Camargo with 13 and Alex Avila added 11.

Northwest is set to host Western Wyoming (21-3 overall, 5-1 Region IX North) on Saturday at 4 p.m. as they seek their first conference win and try to end a seven game losing streak.

The Trappers home game against Central Wyoming that was postponed due to health concerns at Central was originally scheduled for Feb. 2 has now been rescheduled for Monday, Feb. 21, at 7:30 p.m.