“I’ve read it a few times,” Wenk said. “I just don’t know what it means yet. I have no idea what they’re hoping to achieve.”

State lawmakers have said the measure seeks to start a conversation with the Department of Interior; since … 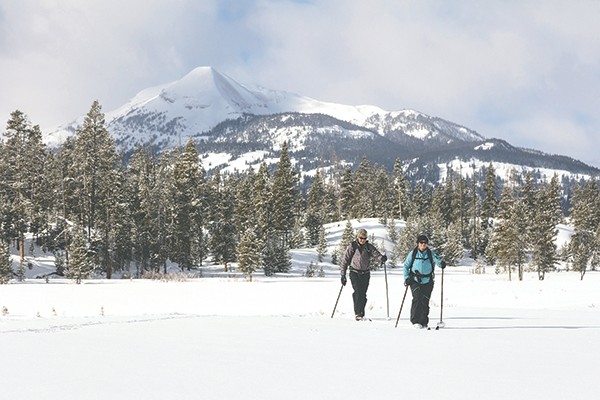 While attending a meeting in Cody last week, Yellowstone National Park Superintendent Dan Wenk carried a copy of a joint resolution recently passed by the Wyoming Legislature, which calls for a conservation fee to be assessed on visitors to Yellowstone and Grand Teton national parks.

“I’ve read it a few times,” Wenk said. “I just don’t know what it means yet. I have no idea what they’re hoping to achieve.”

State lawmakers have said the measure seeks to start a conversation with the Department of Interior; since states can’t legally collect fees in a national park, a conversation is the best they can hope for as far as legislation is concerned.

Wenk — who says he fully understands that the cost of managing wildlife is going up — is willing to talk.

“I’d love to have a conversation with [legislators] so I can help inform my bosses about the state’s position and the rationale behind it,” Wenk said.

He was in Cody for the spring Yellowstone Grizzly Coordinating Committee meeting, where representatives from Yellowstone’s neighbors in Wyoming, Montana and Idaho described rising costs due to conflicts with two of Yellowstones most popular carnivores; grizzlies and wolves.

Wyoming spends millions on migration corridor habitat, disease control and to mitigate conflicts with the species and others causing damage, including relocations, removals and damage payments. Wyoming spent almost $900,000 in 2017 on conflict damage payments to ranchers, farmers and homeowners alone. The feeling among many in the state is they can no longer lean on solely hunters and anglers — consumptive users — to keep paying rising costs of managing wildlife and that a consistent stream of revenue is needed.

Through licenses, stamps, permits, fees and support, hunters and anglers fund about 93 percent of the Wyoming Game and Fish Department’s budget of $81.6 million. Officials are looking to non-consumptive users to pay their fair share. The conservation fee at the gates of the nation’s premier national parks is just one of several ideas they have to shore up the budget.

Wenk has many questions.

“Are they going to put the [proposed fees] to non-consumptive uses? They’re looking for non-consumptive user money, but where would the money be directed to if they ever negotiate this? Would it be to support grizzly bear hunts?” he asked. “I don’t know if this is money that would go to the Department of Transportation, Game and Fish — the resolution doesn’t specify. If it’s collecting money from non-consumptive users, I would certainly hope it would be spent on non-consumptive uses.”

Rep. Albert Sommers, R-Pinedale, sponsored what eventually became House Enrolled Joint Resolution 2. It was a bi-partisan effort co-sponsored by local Rep. Jamie Flitner, R-Greybull, and Sen. Hank Coe, R-Cody, and aimed at finding a revenue stream to assist in the cost of wildlife management. Wyoming, Idaho and Montana are financially responsible for managing their wildlife, protecting wildlife migration corridors and wildlife habitats and mitigating impacts of diseases by wildlife that migrate to and from Yellowstone and Grand Teton. The states are also financially responsible for improving human safety, reducing wildlife-vehicle collisions and resolving conflicts with big game animals and large carnivores that migrate to and from the national parks. They’ve traditionally addressed these responsibilities and managed wildlife through consumptive uses of wildlife

Sommers thinks the time is right. He hopes Secretary of Interior Ryan Zinke, as a Montana native, will be understanding of the costs associated with managing wildlife attracting millions of visitors to the region.

“This is a way to pay for some of those costs,” Sommers said.

Sommers hasn’t identified policies or procedures, saying negotiations would be “above my pay grade,” but he would like to see a mandatory fee as high as $4 per visitor.

Wenk doesn’t think charging more to get into Yellowstone is a good idea. While Wenk has heard rumors of the Department of the Interior backing off a 150-percent peak months fee increase proposed by Zinke last year, he hasn’t been informed if that’s true. More than 100,000 public comments about the fees, most against the dramatic increases, poured into the federal government during the public comment period. Opponents worry increased fees would reduce visitation and damage the economies of the gateway communities.

A 2017 University of Montana study estimated that Yellowstone National Park’s gateway communities would lose $3.4 million if the higher park entrance fees were implemented. Whether the entrance fee proposal happens or not, an additional $8-16 increase (based on two to four people per car) in the form of a mandatory conservation fee may deter visitors from coming to the park, Wenk said.

“The average income level of families visiting the park is about $50,000, based on data we’ve received,” Wenk said.

He also noted that Yellowstone already collects close to $10 million in sales and gas taxes for Wyoming.

“Right now, none of that money is returned within the boundaries of the park. It’s all used for purposes outside the park,” Wenk said. “Seems like a great place to look for funds for some of the things they want to do.”

The resolution has broad support from a mix of organizations — from the Wyoming Outfitters Association to the Greater Yellowstone Coalition.

Jenny DeSarro, Wyoming Conservation Associate for the coalition, lobbied for the resolution at the statehouse this past February.

“We support the conversation fee as an avenue to support wildlife inside and outside of the park,” DeSarro said.

The resolution passed the Senate on a 28-2 vote and the House on a 34-26 vote last month. Now it’s up to the Game and Fish and the governor’s office to strike up the conversation. The resolution specifies revenue would be shared with Idaho and Montana — neighboring states with portions of the park within their borders. But Wenk feels Yellowstone, which he has led for more than seven years, already brings a substantial amount of revenue to the states as visitors travel to the park.

“I wonder what [revenue] the state of Wyoming attributes to visitors coming to Yellowstone and Grand Teton through lodging and sales taxes? Not just in Cody, Jackson, Dubois or Powell, but as they’re coming across the state,” Wenk said.

In the meantime, the superintendent is waiting for a call.

“Wildlife is one of the primary reasons visitors are coming to Yellowstone. Preservation and management of wildlife is one of our highest priorities. I’m happy to have that conversation,” Wenk said.

The East Entrance to Yellowstone opens Friday, May 4, if the weather cooperates.