Wyomingites volunteering to fight in Ukraine

As Cody resident Nick Piazza discussed his efforts to aid Ukraine in its fight against Russian invaders, he apologized for needing to cut the phone interview short. He had an important call on the …

Wyomingites volunteering to fight in Ukraine 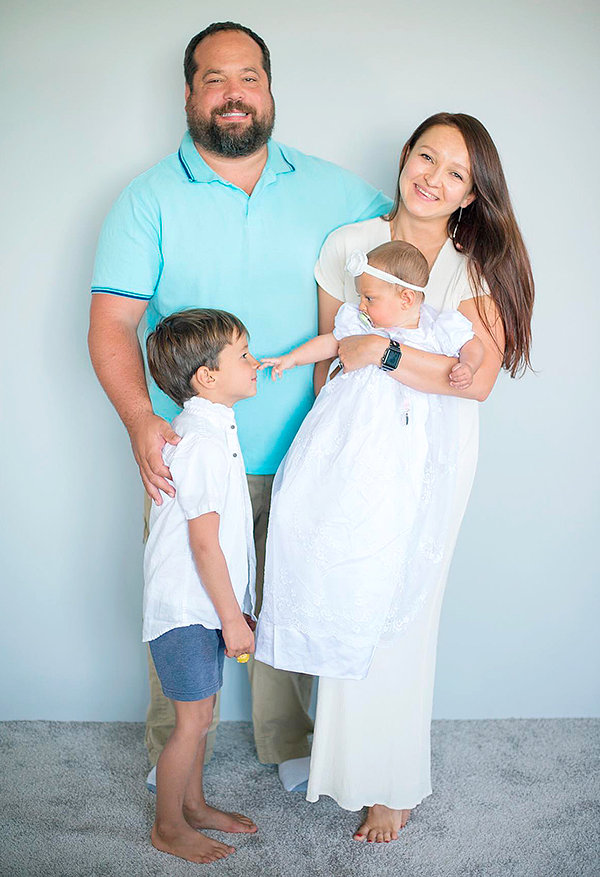 Nick Piazza and his wife, Yulia, pose with their two children, Misha, 8, and Mia, 3. Yulia, who is Ukrainian, and Nick, who is from Cody, met in Kyiv during his nearly 20-year stint in the city. Mia was born in Ukraine, but the family had to leave during the COVID-19 pandemic.
Courtesy photo 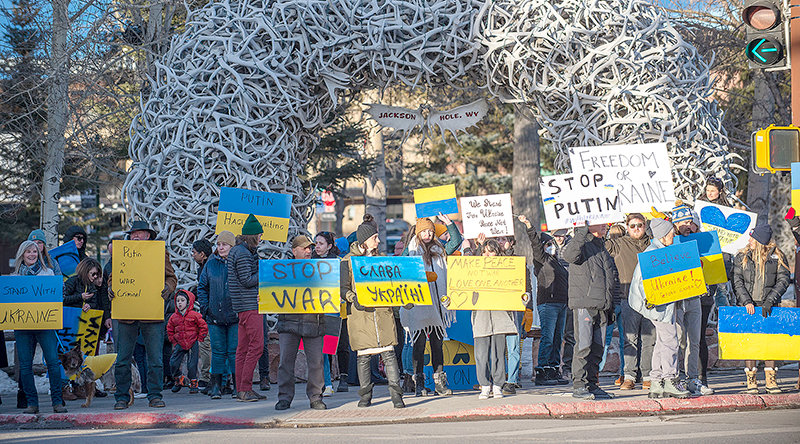 Protesters, including several native Ukrainians, gather at the Town Square in Jackson on Monday to show solidarity with Ukraine. Sleeping Giant Ski Area near Cody, is hosting a Saturday fundraiser for Ukraine and owner Nick Piazza is facilitating several volunteers heading to fight in the new Ukrainian Foreign Legion and work alongside neighborhood watch groups.
Photo by Bradly J. Boner, Jackson Hole News&Guide
Previous Next
Posted Thursday, March 3, 2022 8:25 am
By Mark Davis

As Cody resident Nick Piazza discussed his efforts to aid Ukraine in its fight against Russian invaders, he apologized for needing to cut the phone interview short. He had an important call on the other line.

“I’ll call you back in 15 minutes,” he said. “This guy I’m trying to buy some body armor from is on the other line.”

Piazza, who has family members, friends and investments in Ukraine, is funding logistics for local volunteers willing to combat invading Russian troops. He put out a call on social media for volunteers and enlisted help from Sleeping Giant Chief Operating Officer John McCue.

A former Marine sergeant, McCue has the experience in logistics to get volunteers safely to the fight. While all volunteers are appreciated, the veteran said he’s only taking volunteers with military experience at this point.

Those already in line to head to the Ukrainian front are either reservists or recently retired members of the U.S. Armed Forces, McCue said. The volunteers may join the Ukrainian Foreign Legion, the national guard or a neighborhood watch group.

“They need everything from medics to mechanics,” McCue said Wednesday.

He’ll be on a flight to Poland on Friday to set up the staging of the Wyoming volunteers. Every minute before his departure is critical, he said, as the team attempts to outfit volunteers with kits, including protective “plate carriers,” prior to leaving. Shipping the equipment requires a lot of paperwork and would take too long for the mission, he said, so it’s essential they have everything they need “other than weapons,” before boarding the plane.

McCue, who has traveled to Ukraine in the past, “felt helpless” from Cody before getting the call from Piazza. “Knowing they are under fire while we were here doing nothing was really hard.”

McCue said the team hasn’t been in touch with U.S. officials.

‘She changed so much’

Piazza had urgency in his voice when he was able to return to the interview. His wife, Yulia, is Ukrainian, and Piazza is outspoken about the war in his beloved second home.

“I have lived in Kyiv longer than any other city in my life. Being there for almost [20 years during Ukraine’s] independence, I always felt like we grew up together,” he wrote Tuesday in an impassioned post on social media. “From being a tough place to find a burger or use a credit card to having some of the best restaurants and nightlife in the world — she [Ukraine] changed so much. My forced exile due to COVID for most of 2020 only served as a reminder of how much our relationship means to me.”

The Piazzas have many family members, friends and employees still in the embattled region he’s actively trying to help. He isn’t afraid of being targeted for joining the fight against Russia.

“Sitting in silence because you’re afraid is cowardly. I don’t do that kind of thing,” he said.

It isn’t just talk. He’s not only backing up his words by financing local volunteers, his businesses in Ukraine are also helping feed soldiers and families in need — anything they can do to help defend against the Russian invasion, he said. Piazza has large investments in several companies in Ukraine, including in the largest agricultural company in the country.

It’s hard to sleep. His phone is constantly buzzing with calls and messages from employees and friends trapped in the war zone.

“The other night my [chief financial officer] called me screaming because she was getting bombed while in their basement, and I was trying to talk her down,” Piazza said, his voice noticeably shaking. “I’ve watched friends go out in the morning and patrol streets that have never taken up arms in their lives.”

On Sunday, Piazza thought he’d take his son to Granny’s Restaurant, in Cody, for breakfast. But his phone rang again.

“My friend called me from a bunker with his little kids. He asked me if we could just talk with them for a little while because they were freaking out under the air raid sirens,” he said. “I take things like that extremely personally.”

Piazza is encouraged by all the support Ukraine is receiving here in the U.S. and around the world. But he’s also discouraged by U.S. citizens still supporting Russia and its president, Vladimir Putin. On Monday, as shells rained down on cities and towns across the young democracy, the founder of the America First Political Action Conference, Nick Fuentes, asked a crowd gathered in Orlando, Florida, “Can we give a round of applause for Russia?”

Seeing the response is difficult for Piazza, yet expected.

“There was a big group of Americans that supported Hitler before the war,” he said. “I think this is a very similar case.”

Piazza believes those still backing Russia and its leader are making a “huge mistake” and he has a “generous” offer for AFPAC supporters.

“I welcome them all to give me a call. I will buy them all plane tickets and they can fly to Russia and live there without a free press and the ability to say the things they’re saying now,” he said. “If they can look at this genocide — at this bombing of civilians — and still think that Putin is a good guy, well, I think very clearly that these people are sick.”

Ukraine recently passed a law setting up the Ukrainian Foreign Legion and is calling for all volunteers to come help them defend their country. Piazza warns in an online pledge that joining is “a very serious choice and we are extremely thankful to those that are willing to take this step.”

Piazza is banned from traveling to Russia. In 2008 he supported friends, colleagues and business partners in Georgia (a former Soviet state) to earn his expulsion. He has other major investments in Ukraine, including the IT sector. One of his companies recently designed the new app for the Sleeping Giant Ski Area east of Yellowstone National Park — which he also owns — helping the ski lodge operate safely during the pandemic.

In the final weekend of skiing at the popular North Fork lodge, they are holding a Saturday fundraiser, with 100% of ticket sales proceeds going “directly to the Ukrainian Army.”

Piazza said there are several ways Americans can help Ukraine other than volunteering to fight. Donations are being accepted at the Central Bank of Ukraine, including by credit card, via tinyurl.com/ycktnbbu. Piazza also encourages Wyoming residents to donate humanitarian supplies like blankets, canned food and nonperishables via Ukraine’s top delivery service, Nova Pochta, at novaposhtaglobal.ua/en/. There is a warehouse in Maryland receiving donations that will forward the aid to Ukraine, he said.

Although Putin has threatened to go after anyone helping the Ukrainians, Piazza isn’t worried. “I don’t think that I’m big enough that they really care about me.”

There were concerns when a post on Sleeping Giant’s social media account said it was hacked by Russia, but Piazza said the post was not accurate.

One thing that does worry him is losing the ability to communicate with his friends and business associates in Ukraine. So far he has been able to maintain lines of communication, but that could end at any time as Russia intensifies the fight for major cities, including Kyiv.

Piazza warns the war will get worse — “much worse” — before it gets better. And he predicts there will be a price to pay here in the states as well.

Fuel prices are predicted to increase significantly. The U.S. released millions of gallons of oil from its strategic reserves shortly before President Joe Biden’s State of the Union speech Tuesday to help blunt the sting of higher prices, but Piazza’s prediction is grim.

“I think gas prices in the U.S. are probably going to go somewhere close to $6 [a gallon],” he said. “But let’s hope that’s all we as Americans have to pay for freedom in the world.”