As eastern Wyoming farmers nosed their tractors into fields this spring, some pulled drills planting a new variety of intermediate wheatgrass. The hope is that the crop can negate Wyoming’s … 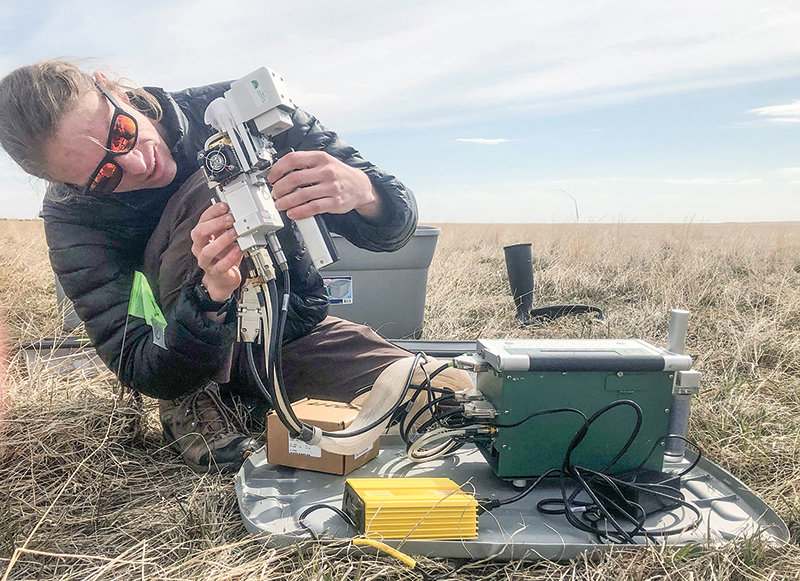 As eastern Wyoming farmers nosed their tractors into fields this spring, some pulled drills planting a new variety of intermediate wheatgrass. The hope is that the crop can negate Wyoming’s fussy weather and bolster bottom lines ravaged by falling organic wheat prices.

Four producers have planted experimental plots of Kernza, said Hannah Rodgers, a Ph.D. student involved in the project in the University of Wyoming’s College of Agriculture and Natural Resources.

Kernza is a perennial, unlike wheat, which is an annual and does not regrow after harvested. Once cut or harvested, Kernza regrows. The variety can be used as a forage crop or, if left longer, can be harvested for grain. The perennial crop will develop and support microbial life and sequester more carbon.

“It’s super new and only grown in a few places,” said Rodgers, such as Kansas, Minnesota, California and Nebraska.

But never in Wyoming.

“We thought Kernza might be uniquely suited to Wyoming because the state has such a harsh environment,” said Rodgers.

Kernza is harvested for grain in wetter states and then keeps growing. “You might cut it for grain and then graze it later in the summer,” she said. “Nobody has ever planted it anywhere this dry. So, it’s really an experiment.”

Beer and cereal are the main products currently made from Kernza.

Parts of eastern Wyoming are known for growing organic wheat, usually in a fallow cropping. Farmers say soil is degrading, prices are dropping, and farmland is being abandoned for other uses, such as grazing. “Which is important,” said Rodgers. “But maybe less valuable.”

The $75,000 Western Sustainable Agriculture Research and Education grant has several parts. UW Extension soils specialist Jay Norton will compare soil health with Conservation Reserve Program fields. Alex Fox, another Ph.D. student on the project and working with Bret Ewers in the Department of Botany, is taking plant measurements like photosynthesis and water use throughout the growing season to see Kernza’s water consumption compared to wheat. Rodgers will study soil fertility and microbial communities and carbon sequestering, and extension research scientist Tom Foulke will examine if the crop may benefit producers economically.

“It’s less input intensive or fossil fuel intensive,” she said. “You can plant it and sort of forget it about it. You don’t have to till the soil every year, and you don’t have to plant every year so there are way fewer tractor passes.”

The kernel is smaller than wheat, she said. Wheat is selling for about $5 a bushel and Kernza about $5 per pound. A bushel of wheat is about 60 pounds.

The crop is planted in rows, like wheat. Many farmers had already heard about Kernza and already had an interest in it, she said.

“Farmers around here have a ton of experience planting intermediate grass,” said Rodgers. “When we delivered seed a few weeks ago, several of them looked at it and they were, ‘Oh, yeah, this is intermediate grass. I know how to plant this, and I have the drill for this.’”

The crop is typically planted in the fall like winter wheat, but Wyoming producers said the crop does better if planted in the spring. There will be no harvest until next summer.

This spring’s massive snowstorm that battered eastern Wyoming may help jumpstart the crop, which Rodgers said can be hard to establish.

Two farmers planted Kernza into dryland fields around Chugwater, and two planted into irrigated land near Pine Bluffs. The grant pays for seeding 10 acres per farm, “But all four of the farmers decided to plant more than that,” she said.

The farmers were all-in when approached.

“They were like, ‘I was wondering when somebody was going to do a Kernza thing because we’ve been hearing about it, and we think it would great for here,’” relayed Rodgers.

Acreages are 16, 20 and one farmer planted 80 acres. An additional test plot is at UW’s James C. Hageman Sustainable Agriculture Research and Extension Center near Lingle.

Three of the farmers had already planted Kernza when Rodgers got a call from another wanting to know how to get seed.

“And then he went ahead and put in 80 acres,” she said. “It’s so early in the Kernza world it’s hard even for farmers to get seed to learn anything about it without somebody coordinating things. So we are fortunate that Tessa Peters, the Land Institute’s Kernza commercialization manager, lives in Laramie.”

Peters received her bachelor’s degree in agroecology from UW and a Ph.D. in plant breeding and plant genetics from the University of Wisconsin-Madison.