City of Powell workers recently discovered a different kind of “weed” sprouting up in a couple of city planters: marijuana plants. 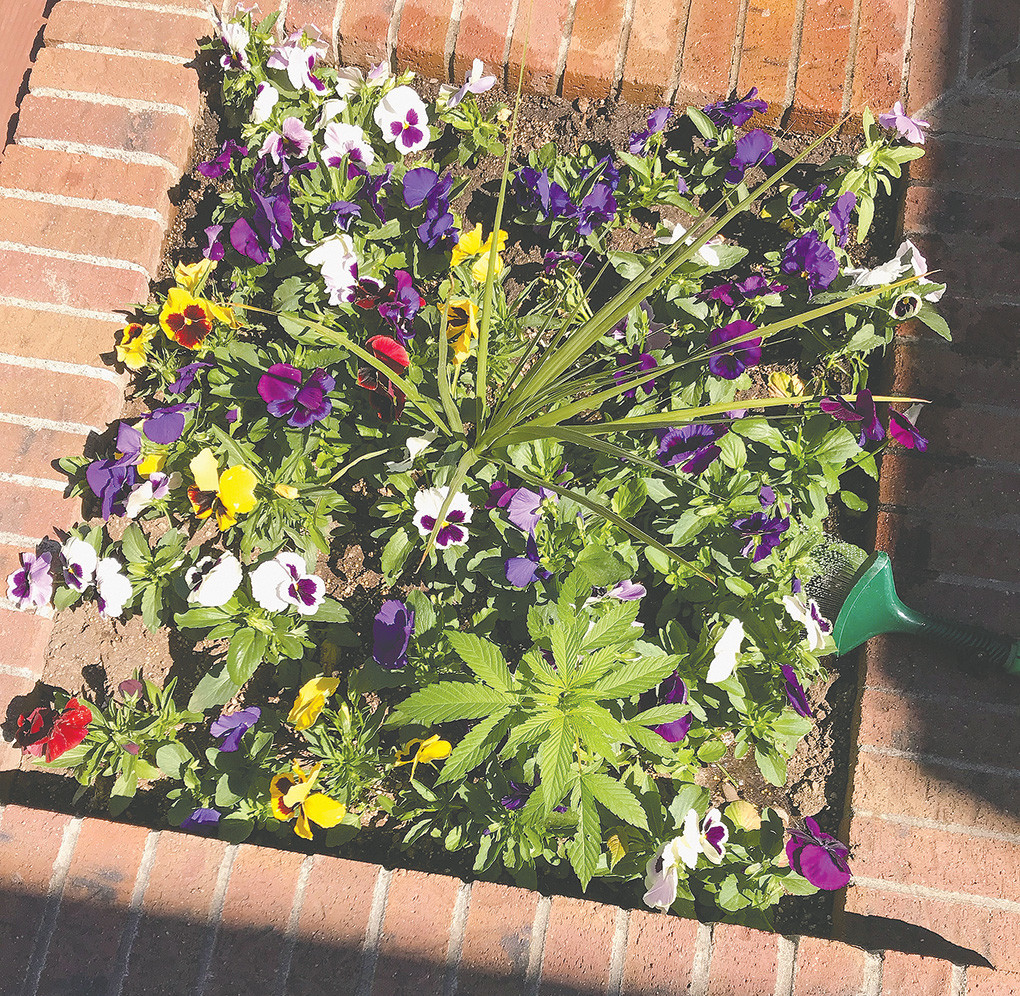 One of the plants recently spotted in this City of Powell pot does not belong with the others. City officials have found (and destroyed) three apparent marijuana plants in three different planters.
Photo courtesy Theresa Cheney, City of Powell
Posted Thursday, July 12, 2018 8:00 am
By CJ Baker and Don Cogger

City of Powell workers recently discovered a different kind of “weed” sprouting up in a couple of city planters: marijuana plants.

Amid the other plants and flowers growing in the pots, city workers unknowingly watered and cared for the cannabis plants for a period of weeks before discovering a couple on the afternoon of June 29, Eckerdt said.

“They recognized what it was once everything started to leaf out,” he said.

City Parks and Recreation Superintendent Del Barton said the plants were difficult for his seasonal workers to distinguish at first.

“To be honest with you, and to be fair, without having a marijuana field testing kit, I can’t tell the difference between hemp and marijuana,” Barton said with a chuckle. “But it sure looked like marijuana to me.”

Barton’s workers pulled the plants and took them to police. A couple days later, another plant was found, bringing the total to three plants in three different pots.

“They [the workers] just mentioned to me this morning that in the course of watering, they think — though we’re not sure yet — that there may be some additional ones popping up,” Barton said Wednesday.

He added that officers couldn’t resist having a little fun with the workers who discovered the stash.

“I guess somebody over at the PD was joking with the gals ... telling them, ‘You know, we could arrest you for possession,’” Barton said. “The gals said, ‘We just pulled them out of the pot, we weren’t going to do anything with them.’”

Police gave the workers some small, paper lunchbags to use if they come across any plants in the future.

While the chief can only speculate on the intent behind the clandestine plantings, “my guess is that’s somebody’s sense of humor,” Eckerdt said.

The first plants were found at the corner of Second and Clark streets — just a stone’s throw from the Powell police station.

“As soon as I heard that I went out and checked all the plants in front of the PD to make sure there weren’t any [marijuana plants] in any of ours,” Eckerdt said.