DeVos — whose family owns a large ranch in the Wapiti Valley — referenced the small school west of Cody in her response to a question about guns in schools.

The stage was set toward the beginning of the U.S. Senate Health, Education, Labor … 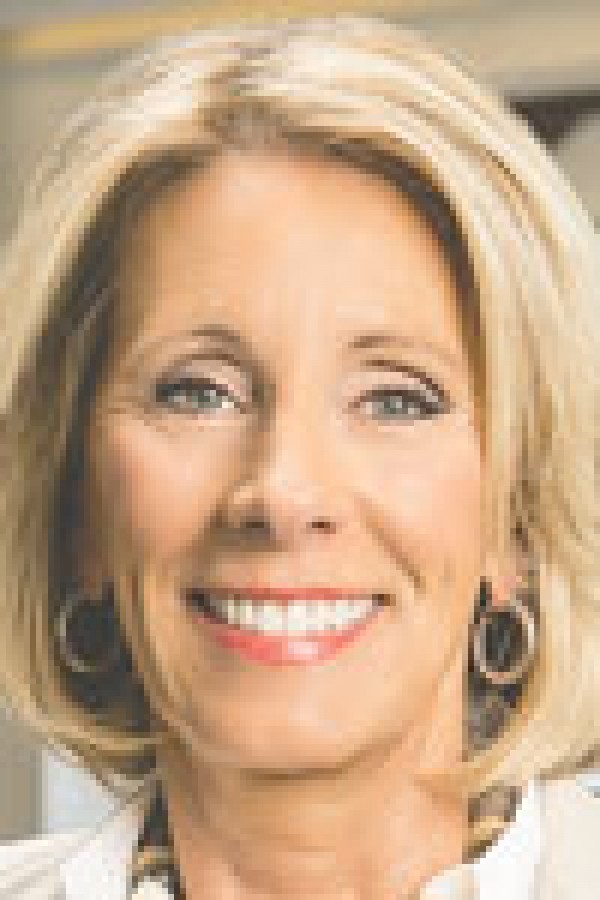 Grizzly bears and the Wapiti Elementary School were unexpectedly thrown into the national spotlight during a Tuesday hearing for education secretary nominee Betsy DeVos.

DeVos — whose family owns a large ranch in the Wapiti Valley — referenced the small school west of Cody in her response to a question about guns in schools.

The stage was set toward the beginning of the U.S. Senate Health, Education, Labor and Pensions Committee’s more than three-and-a-half hour hearing on Capitol Hill. That’s when U.S. Sen. Mike Enzi, R-Wyo., asked DeVos what she’d do to engage rural and frontier states like Wyoming in implementing federal education policy.

DeVos offered that rural schools and settings “require different approaches and different options” and mentioned the possibility of offering students the choice of distance learning.

Referencing a conversation she had with Enzi prior to the hearing, DeVos also said she’d “particularly enjoyed hearing about the special needs of schools like the Wapiti school that has the grizzly bear fence surrounding it; I think that is a unique need to Wyoming, certainly.”

Hours later, DeVos invoked Wapiti again when U.S. Sen. Chris Murphy, D-Conn., asked whether she thought guns “have any place in or around schools.”

“I think that’s best left to locales and states to decide,” DeVos replied.

“You can’t say definitively today that guns shouldn’t be in schools?” interjected Murphy, an advocate of tighter gun control.

“I will refer back to Senator Enzi and the school that he was talking about in Wapiti, Wyoming,” DeVos said. “I think probably there, I would imagine there’s probably a gun in the school to protect from potential grizzlies.”

There actually is not a gun at the Wapiti school, because having one would violate federal law, said Park County School District No. 6 Superindent Ray Schulte. However, he is open to letting local school boards decide what’s best for their students.

“It may not be the right decision for certain school districts,” Schulte said of a gun on campus. “But when you’re in rural areas and you’re maybe 15 or 20 or 30 minutes away from anybody who could respond to an event, it does make sense that you might have somebody on staff who is armed and able to respond to an emergency.”

DeVos has spent time in Park County. Her mother, Elsa Prince Broekhuizen, owns the Double E Ranch in Wapiti. The roughly 800 acres of family property — valued by the county assessor’s office at more than $12 million — lie south of U.S. Highway 14/16/20 and run up into the hills.

The Prince family makes their home in Michigan. That’s where DeVos grew up. She is one of four children of Prince Broekhuizen and the late Edgar Prince, an engineer who made a fortune in an auto parts company. DeVos later married Dick DeVos, an heir to the Amway marketing empire. The DeVoses have four children, none of whom attended public school.

Her brother, Erik Prince, founded Blackwater, a private security company that the U.S. employed in the Iraq war; it came under scrutiny when its guards were prosecuted in the deaths of 14 civilians in Baghdad in 2007. Erik Prince has a house at the family’s Wapiti ranch and has also spent time in the area.

Over the years, Prince Broekhuizen has contributed tens of thousands of dollars to some local nonprofits through her charitable organization, the Edgar and Elsa Prince Foundation.

The Edgar and Elsa Prince Foundation’s tax filings have long listed DeVos as a vice president — and the foundation’s contributions to certain conservative Christian groups came under scrutiny leading up to and during DeVos’ confirmation hearing.

Liberal critics particularly took aim at the Edgar and Elsa Prince Foundation’s contributions to Focus on the Family, which calls homosexuality a sin and supports “sexual orientation change efforts.” DeVos and her husband contributed to Focus on the Family through their own foundation, though they say they stopped many years ago.

DeVos’ record prompted five openly gay senators to write to the education committee and accuse her of repeatedly trying to undermine LGBT rights. However, DeVos said Tuesday that she never supported the idea of “conversion therapy” and “believes in the innate value of every single human being.”

DeVos also said the tax documents listing her as a vice president of the Elsa and Edgar Prince Foundation are “incorrect” and “a clerical error.”

“I can assure you I have never made decisions on my mother’s behalf on her foundation board,” she told the Senate committee.

DeVos is a former Michigan Republican Party chairwoman who heads the American Federation for Children, an advocacy group that promotes school choice and voucher programs. She and members of her family have given millions of dollars to Republican candidates over nearly three decades, according to the Center for Responsive Politics.

Amid questions from Democrats about her qualifications, political donations and advocacy for charter schools and school choice, DeVos pledged she would not seek to dismantle public schools.

In the sometimes contentious confirmation hearing, DeVos said she would address “the needs of all parents and students,” but that a one-size-fits-all model doesn’t work in education.

While Democrats expressed concerns, Enzi was among the Republicans who had some praise for the nominee.

“I appreciate your emphasis on the value of craftsmanship and also technology,” Enzi said, also saying he was pleased with her remarks about the Every Student Succeeds Act.

DeVos said that if she is confirmed education secretary, she will take a salary of only $1.

(The Associated Press contributed to this report.)