Through her journey from Cody to Cheyenne, she hopes to … 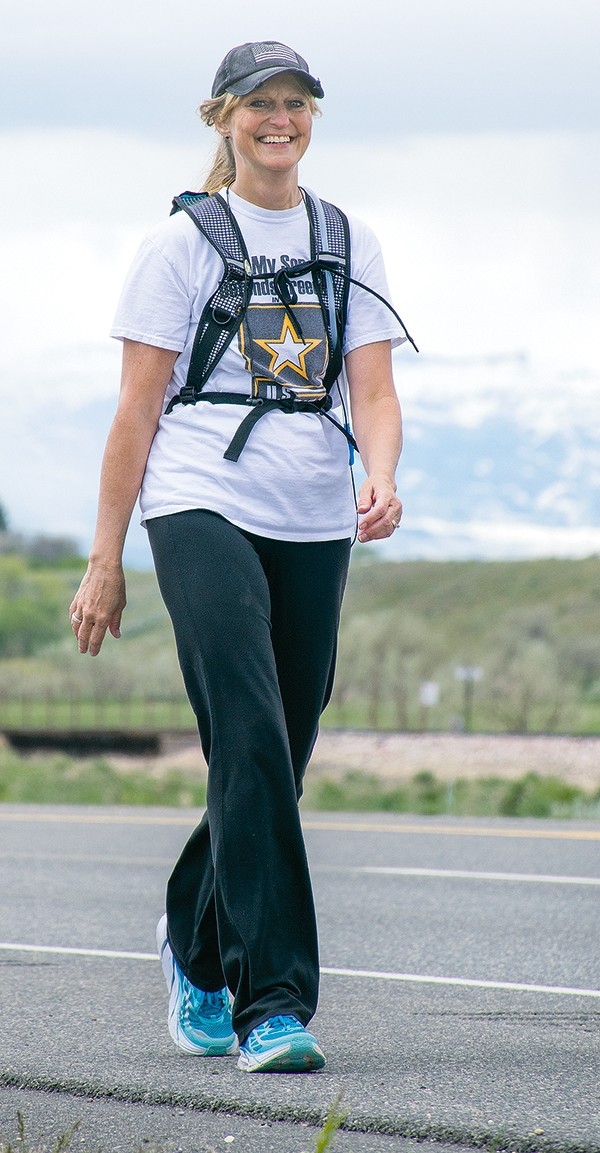 Terresa Humphries-Wadsworth walks from Cody to Powell on Saturday in honor of Armed Forces Day. In September, she will walk from the Wyoming Veterans Memorial Park in Cody to the Wyoming State Capitol Building in Cheyenne — over 400 miles in 15 days — to raise awareness for suicide prevention.
Tribune photo by Toby Bonner
Posted Friday, May 26, 2017 2:47 pm
By Tessa Baker

As she prepares to walk more than 400 miles across the vast open spaces of Wyoming, Terresa Humphries-Wadsworth knows it won’t be easy.

Through her journey from Cody to Cheyenne, she hopes to raise awareness for suicide prevention in Wyoming — one step at a time.

When Terresa first told her friend Kelly Eckerdt about the walk last year, she replied, “You can’t do this alone. I’m going to do this with you.”

“And I just cried. I couldn’t believe that she would immediately jump in and help,” Terresa said.

The idea of walking more than 400 miles over a span of 15 days is daunting, she said.

“I am not an athlete … before this, I didn’t exercise at all,” Terresa said. “For me, the idea of doing this walk … it was huge. Like going to the moon.”

But Terresa and Kelly believe it’s worth raising awareness for an issue that’s dear to their hearts.

Terresa started training for the Walk Across Wyoming on Aug. 14 — the same day her son, Tannis, left for basic training.

Rinda Eastman, a personal trainer, offered to donate her time to help coach Terresa and Kelly.

“She’s an excellent coach — an expert on encouraging you when you’re struggling and challenging you to the next level,” Terresa said.

To reach Cheyenne, their goal is to do about 30 miles a day; some days will be a little less, depending on the terrain.

Terresa started training with little walks of about one-fourth mile.

Eventually, she did a 3-mile walk at the Buffalo Bill Reservoir. Then she trained for her next distance challenge.

“And that’s just how my training has progressed,” she said.

On Saturday, she accomplished her greatest challenge yet, walking from Cody to Powell. That walk coincided with Armed Forces Day.

With two sons in the military, Terresa cares deeply for active duty service members and veterans.

“Only 1 percent of the population serves in the military, supporting the 99 percent,” she said.

Sadly, an average of 20 veterans commit suicide every day.

She strives to connect people with resources and support, including the National Suicide Prevention Lifeline at 800-273-8255.

‘I understand the struggle’

As Kelly trained this winter, an old foot injury kept bothering her.

“The more I started to train for the walk, the worse it got,” she said.

She went to the doctor, and an MRI showed damage and inflammation. She’s been in a walking boot for several weeks, and must continue to rest her foot. It’s possible she’ll need surgery.

While she’s not able to train right now, Kelly is still planning to join Terresa on her journey.

“My end goal is still the same — I still want to go from Cody to Cheyenne, I still want to be able to help spread the message of suicide prevention, but how I get there just may look differently,” Kelly said.

She and her husband, Roy Eckerdt, will be Terresa’s support team, setting up first aid stations with snacks, water and help along the route.

It’s important for people to realize that in their struggles, there is a support team and resources to help, Kelly said.

“My journey on this prevention walk versus her journey just shows the differences in people’s lives and their own personal struggles,” Kelly said. “We may have the same end goal, but what one journey looks like may be very different from another.”

Kelly hopes to still be able to walk a couple miles at a time along the way, or maybe ride her bike.

“Sometimes you have to reframe what your journey looks like, and accept things as they come along,” she said. “And do what you’re able.”

For Kelly, the Walk Across Wyoming is very personal.

“I struggle with major depressive disorder, so I know what it is to be on my ups and downs,” she said. She added that she has to take medication, “just like other diseases you would have to take medication for.”

She was diagnosed about 15 years ago, and has dealt with it since high school.

“I understand the struggle. I’ve been there, done that,” she continued. “I am an overcomer. And for me, it’s not just about the mental health, now it’s the physical limitations, but I’m not giving up.”

She wants to help others who face similar struggles and who “continue to go through that journey of what feels like desperation.”

And she wants to let them know: There is hope.

Kelly and Terresa have considered all the logistics — traffic, food, water, tennis shoes, a camper to stay in, the Wyoming weather.

“We’re prepared to walk through the rain or the mud or the slush or the wind or the heat,” Kelly said. “Those are all those obstacles you learn to overcome, just like you would in a mental health situation. You learn to overcome your fears and learn to put it into perspective and deal with it — and then breathe a sigh of relief when it’s done.”

Terresa said she’s overwhelmed by those who are helping with the Walk Across Wyoming, including Eastman, the VFW Auxiliary, Sports HQ, Ashley Trudo, Travis Sylvester, Savannah Dube and Donna Merkel.

They also have support lined up along the way between Cody and Cheyenne. Terresa and Kelly are encouraging folks across the state to join them on their journey by walking or biking alongside them as they walk through your town. Their schedule is posted online www.walkacrosswy.com.

“I want to invite people to just do little walks, where they’re at,” Terresa said.

If Kelly is unable to do the full 400-mile walk, she’s asking people to help fill-in for those miles in her place.

As Terresa and Kelly share the message of hope and raise awareness for suicide prevention, they’re also looking forward to the people they’ll meet between here and Cheyenne.

“You know that saying about Wyoming, that it’s a small town with long roads — I’m just going to walk down the road, and meet some neighbors along the way,” Terresa said.

On the website, there’s an “In Honor Of” section, and Terresa and Kelly “will dedicate a mile to each memory shared for those who have been touched by suicide, those who are still fighting the battle, and those whom we remember.”