A Powell trailer home was destroyed in a Saturday fire.

Members of the Powell Volunteer Fire Department were summoned to the residence in Scott’s Granite Park, off South Jones Street, around … 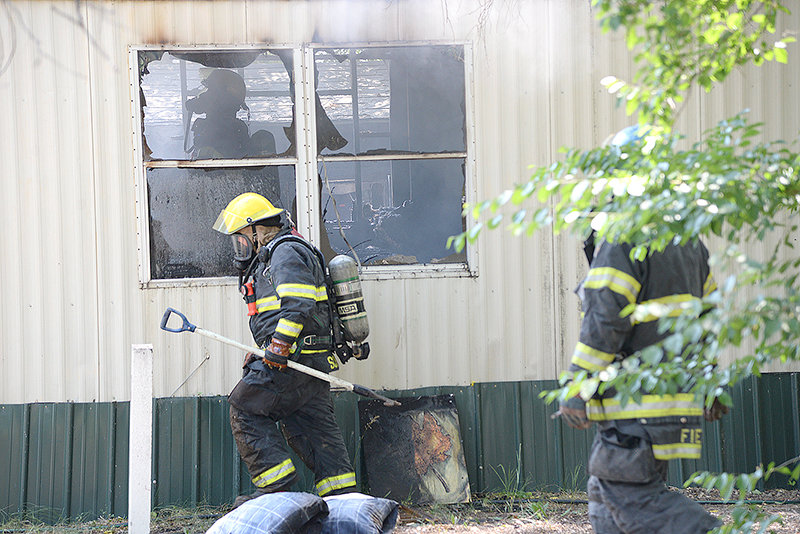 Members of the Powell Volunteer Fire Department work to extinguish a fire that broke out in Scott’s Granite Park midday Saturday. The trailer was a total loss.
Tribune photo by Kevin Killough
Posted Tuesday, July 6, 2021 8:20 am
By CJ Baker

A Powell trailer home was destroyed in a Saturday fire.

Members of the Powell Volunteer Fire Department were summoned to the residence in Scott’s Granite Park, off South Jones Street, around 11:35 a.m.

The fire started on the porch and quickly moved inside the home, said Powell Fire Chief Dustin Dicks.

“We were not 100% sure” what caused the fire, Dicks said, “but it kind of looked like a cigarette.”

There were no injuries from the blaze, he said, as no one was home at the time, but the trailer was “a total loss.”

Firefighters wound up returning two more times. At 2:11 p.m., they were called back when an on-scene Powell police officer’s patrol vehicle began smoking.

An actuator in the door that automatically rolls down the vehicle’s window for the department’s K-9 apparently shorted out on the warm day, Dicks said. That trouble was dealt with, but then around 7 p.m., the trailer home’s porch rekindled and began smoldering again. That ended up being the department’s final call to the trailer, capping what proved to be a busier day than the Fourth of July.

Ahead of the holiday, Park County fire officials had urged the public to abstain from fireworks amid hot, dry conditions. County commissioners allowed the pyrotechnics to continue through the Fourth of July, but as of Monday, they and other open fires are prohibited until further notice.

Fireworks remain illegal at all times within City of Powell limits. Between Saturday and Sunday nights, Powell police logs show the department dealt with roughly nine fireworks-related incidents. A couple complaints were tied to fireworks legally deployed outside the city, while the other incidents resulted in officers informing the residents of Powell’s ordinance and telling them to stop.

Given the booms that echoed across the Powell Valley, it was unclear whether fewer residents shot off fireworks this year. However, the Fourth of July wound up being a relatively normal night for the Powell Volunteer Fire Department. Firefighters responded at 10:10 p.m. Sunday to douse a fireworks-ignited blaze in the 1000 block of Road 16 northwest of Ralston. That was the only call amid the sometimes windy conditions.

“Everybody was, evidently, more cautious,” Dicks said, adding that “zero [calls] would have been nice, but … we were glad it was a quiet night.”

Deputy Park County Fire Warden Sam Wilde — who had warned that new fires could strain local departments given the conditions — said things wound up being quiet in the Cody area, too.

“Mother Nature was kind to us,” Wilde said. “We had good relative humidity recovery, which was not predicted but very welcomed!”