Immigration, reproductive health care, equal pay, indigenous women, LGTB rights, history and science were among the diverse topics discussed at the Women and Allies March in Cody on … 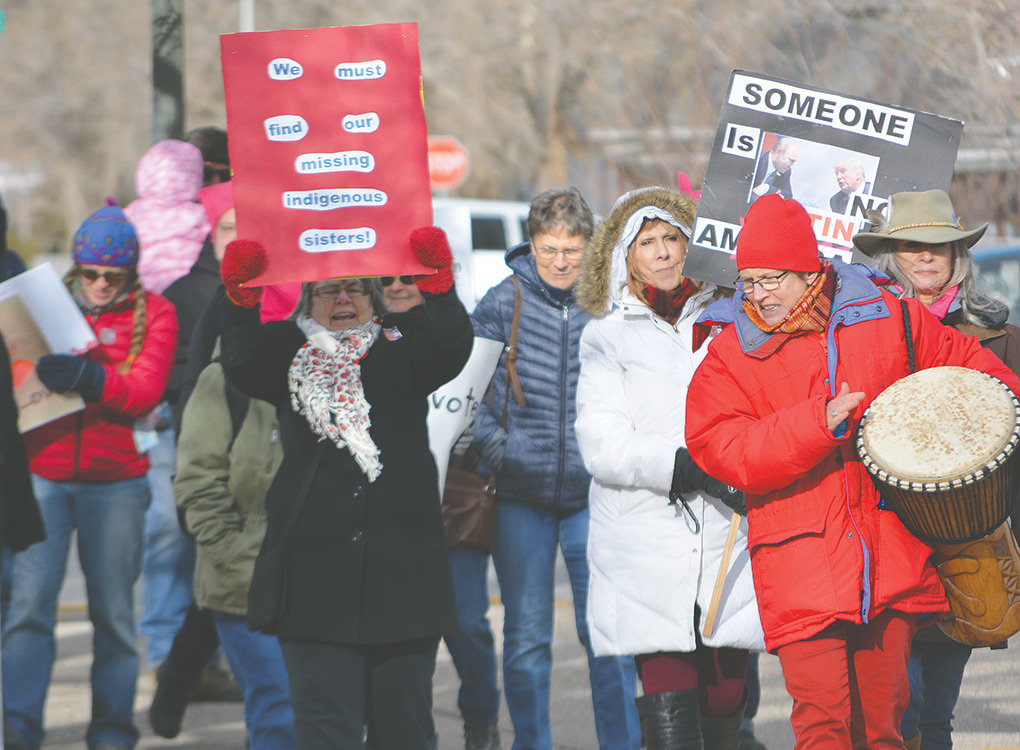 Mary Keller leads a march around City Park in Cody at the conclusion of the 2019 Women and Allies March Saturday afternoon. Organized by Wyoming Rising, the event encouraged participants to ‘share your vision for a more equal, just and compassionate future.’
Tribune photo by Tessa Baker
Posted Tuesday, January 22, 2019 8:00 am
By Tessa Baker

Immigration, reproductive health care, equal pay, indigenous women, LGTB rights, history and science were among the diverse topics discussed at the Women and Allies March in Cody on Saturday.

“We are gathered here today in solidarity with a lot of passion for a huge range of issues,” said Jenny DeSarro of Cody, who was one of about a dozen speakers at the event. “So what I’m imploring you to do is to go beyond showing up here today — vote, donate, volunteer and engage with lawmakers.”

Organized by the local group Wyoming Rising, the third annual march was themed “2019: Year of Wyoming Women.” It was one of numerous marches held across the country, which started in January 2017 on the day after President Donald Trump’s inauguration. Attendance in Cody appeared to be down from the hundreds of people who showed up in prior years.

During Saturday’s march, a Northwest College student shared her own experience with political activism in recent years. Jordan Nelson, a freshman studying political science, said she was not impressed by how President Trump talked about women and minorities.

“So I started looking for ways to inspire people my age to take the higher road and to know what he was saying was morally reprehensible,” Nelson said.

Growing up, her father taught her to stay true to what she believed in, so Nelson talked to her peers, encouraging them to pay attention to what’s happening in politics and to get involved.

“… Regardless if they realize it or not, what our legislators do directly affects us as a young populous,” Nelson said.

She also shared about meeting Gary Trauner, a Democrat who challenged Sen. John Barrasso in the 2018 General Election. Nelson said she learned a lot from Trauner, including what it means to be gracious in the face of adversity.

Nelson challenged those gathered at Saturday’s march to “be open to listening to someone whose political views are completely different from yours.”

“After coming to this march to promote gender equality, marching for science … take a minute to talk to someone who would never come to this sort of thing,” Nelson said. “It might seem like you’re talking to a brick wall, but when you show openness and respect to someone across the aisle, you’re doing a huge part in bridging the deep divide America is in socially and politically right now.”

As a partial government shutdown continues, immigration is at the heart of the political divide in Washington, D.C.

At Saturday’s march, Mary Baumann of Powell, the former multicultural program coordinator at NWC, talked about her experience helping a young man who came to the U.S. as a young child with his family and didn’t have citizenship.

“He was an excellent student and a fine young man, and of course I was sympathetic to his plight,” Baumann said.

She sought the help of Sen. Mike Enzi’s office, which took on the student’s case. Over time, he became a U.S. citizen, and is now a successful businessman in Montana and North Dakota.

Last fall, Baumann got a call from her former student as he followed the news of migrant caravans coming from Central America.

“It made him reflect on his path to citizenship, and he told me he didn’t know what he would have done if I hadn’t helped him. And I reminded him that it wasn’t just me — this could have never happened if Sen. Enzi’s office hadn’t intervened,” Baumann said. “Now, considering the current political climate, I don’t think that this could happen today.”

The former student invited Baumann to join him on a trip to Oaxaca, Mexico, in November. During the trip, she reflected on a lot of things, including “how strange and harsh my America has become.”

“Working with immigration for 15 years, I am well aware that the processes and laws need to be revised,” she said. “What bothers me, though, is the demonization of the people of Mexico and Central America.”

America is a country of immigrants, Baumann said, and the border crisis is a humanitarian crisis.

“What happened to empathy in this country? And what would a wall say about this country?” Baumann asked. “There must be other ways besides this so-called solution.”

She said America should not remove children from parents, should fix outdated immigration laws, provide adequate shelter for those seeking asylum, support governments that are trying to solve their own humanitarian crises, create a path of citizenship for Dreamers and stop using fear for political gain.

“I want to quote Ronald Reagan: ‘Tear down this wall!’” Baumann said to applause. “Or at least, Mr. Trump, don’t build one.”

Organizers of the Women and Allies March encouraged participants to share their visions “for a more equal, just and compassionate future.”

Cody High School senior Ben Wambeke shared his own story and what led him to start a Gay-Straight Alliance (GSA). When he got to high school, Wambeke said he felt alone and didn’t see a community of people who understood him.

“I was in desperate need of a support system, and sadly, there wasn’t one in place, so I made one,” Wambeke said. “I decided that no queer person should ever feel the way I felt again — deserted, unworthy, unloved or abandoned. It took four years, but this week, Cody High School had its first GSA meeting and I’m proud to say it was a full room.”

It wasn’t an easy journey, Wambeke said, but he had a lot of support from people in the Cody community and in the state.

“For every helpful hand, there was a vicious remark, a cruel reminder of why this club is so desperately needed,” he said.

At the close of Saturday’s event, the group walked around City Park in Cody, chanting “This is what democracy looks like.”