State and federal officials say the risk of infecting humans is low, but veterinarian Ray Acker, who owns and operates Big Horn Animal Care Center in Powell, said it behooves hunters and dog owners to take precautions to protect themselves and their … 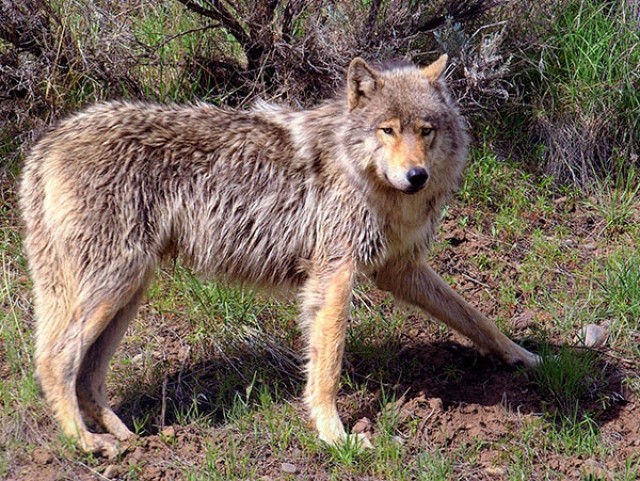 Although state and federal officials say it is rare, a tapeworm found in wolves could threaten humans in Park County, according to a local veterinarian.
Photo courtesy Neale Blank
Posted Tuesday, March 18, 2014 2:34 pm
By Gib Mathers

Powell veterinarian warns of problems that may be spread by wolves

A nasty tapeworm found in Alaskan wolves has turned up in Park County and has infected multiple elk and four dogs, according to a Powell veterinarian.

State and federal officials say the risk of infecting humans is low, but veterinarian Ray Acker, who owns and operates Big Horn Animal Care Center in Powell, said it behooves hunters and dog owners to take precautions to protect themselves and their pets from the parasite.

Echinococcosis granulosus (E. granulosus) can infect and kill humans, but there have been no reported cases of human fatalities in Wyoming.

Acker said he fears it is only a matter of time before the tapeworm’s cysts invade humans and potentially kill them.

E. granulosus tapeworm can infect all carnivores, but wolves and other canines are the primary host. “You could call it the wolf tapeworm,” Acker said.

“We always take any type of situation related to human safety and wildlife very seriously,” Dan Thompson, statewide supervisor of the large carnivore management section in Lander said in an email.

“I don’t know the prevalence in wolves, but certainly some carry it,” Edwards added. “It’s very, very rare that it infects people.”

Humans contract the hydatids (cysts) from E. granulosus. Hydatid disease in humans is difficult to diagnose and may require surgery to remove them. “It can be fatal,” Acker said.

Humans can be exposed to the eggs from canine feces or fur. From there the cysts take up residence in the human’s lungs or liver.

“It is a silent killer,” Acker said. Humans can unknowingly carry the cysts for 20 years until it becomes critical. When cysts rupture, the person enters anaphylactic shock and dies within 10 minutes, Acker said.

In Alaska, there have been 300 reported cases of hydatid disease in people since 1950. That is a result of canines, primarily wolves, contaminating the landscape with billions of E. granulosus eggs in their feces. The invisible eggs are ingested by wild and domestic grazing animals and occasionally by humans who release clouds of the eggs into the air by kicking the scat or examining the feces to see what the wolf had been eating, according to a December 2009 article in The Outdoorsman.

“This is not limited to wolves, and quite honestly we as an agency always stress safety precautions when dealing with wild game and/or fur bearers as it related to ectoparasites and other potential parasites,” Thompson said. “This topic seems to flare up every now and then, but it is still important that we (Wyoming Game & Fish Department) make sure people have the facts and are safely enjoying our outdoors. Long story short, the health risk is very low.”

In the last four or five months, it has been found in wild ungulates, but not domestic ungulates in Wyoming. It is not a problem for humans, but the possibility does exist, said State Veterinarian Jim Logan.

“It’s pretty rare as far as we know,” Logan said.

“In northwest Wyoming, hydatid cysts have been found in the lungs of a few moose and elk,” according to a 2010 Echinococcus granulosus in Wyoming fact sheet from the Game & Fish. “Where the parasite is found in wolves and wild ungulates, most public health agencies consider the public health risk to be very low.”

There have been no cases of E. granulosus in the Big Horn Mountains, but there are no wolves there, Acker said.

The definitive host for E. granulosus where they reach maturity and reproduce are canines and wild carnivores.

Wild or domesticated ungulates, such as elk or sheep and humans, serve as intermediate hosts where the parasite transitions between life stages. The larval stage results in the formation of hydatid cysts in intermediate hosts.

The eggs form inside the primary host. The eggs hatch into larva and migrate to the liver and lungs to form cysts. The predator, such as a canine, feeds on intermediate host prey and become the definitive or primary hosts, Acker said.

Stock on a national forest grazing allotment could pick up the cysts while grazing. Then the animals are brought back from the mountains to their pastures here. If the stock has the cysts in its lungs, they won’t gain weight.

Or, if the stock dies, predators or dogs eat the carcass and spread the disease. If numerous stock are infected it could have a significant financial impact on producers, Acker said.

In January a friend of Acker’s killed an elk in a Meeteetse hunt area. When the hunter field-dressed the elk, the lungs were loaded with cysts. Something attracted the dogs to the elk’s lungs, perhaps an odor from the cysts, and the dogs consumed the elk’s organs. He has wormed the dogs twice with praziquantel that kills E. granulosus in canines, Acker said.

Game & Fish sent the elk lung tissue samples to the Game & Fish lab in Laramie and the lab verified it as E. granulosus, Acker said.

“Do not feed uncooked meat or organs of deer, elk, moose or sheep to dogs,” said the fact sheet.

If a hunter notes hydatid cysts in their elk, they should not panic because the tapeworms must pass through a primary host like a dog first, Acker said.

“Those hunting or trapping canids (mammals of the dog family) in Wyoming are encouraged to wear latex or rubber gloves when field dressing and skinning their animals. Additionally, wild game meat should always be cooked thoroughly,” said the fact sheet.

Taking the wolf pelt to a car wash and using the high-pressure hose to blow eggs off the fur is a handy precaution. Taxidermists should also use care, Acker said.

Watch for white segments around the rectums and in the dog’s stool. Initially the one-quarter by one-eighth inch segments will move slightly. Worm your dogs, Acker said.

Eggs can survive in excrement for up to one year. “I think they do well in the cold,” Acker said.

Dogs, with a propensity to roll in feces can collect the eggs on their coat and pass it on to their masters, Acker said.

Acker believes the disease has just reared its head among wildlife in this area. “We didn’t have it down here until they introduced these wolves,” he said.

In 1995/96 wolves from Alberta and British Columbia were re-introduced with 31 wolves in Yellowstone National Park and 35 in central Idaho. They were treated for parasites including, E. granulosus and it was well documented, Jimenez said.

“All wolves captured in Canada for relocation to Yellowstone National Park and central Idaho were treated for lice, roundworms and tapeworms before being released in Wyoming,” said the fact sheet.

Some people who dislike wolves returning to the region cite E. granulosus as another factor for their disdain for the canines. Acker admits to being anti-wolf, but he said if there are a lot of rabid skunks in the area they are eliminated in the interest of public safety.

“I’m anti-wolf here,” Acker said. “I think they belong where they came from.”

When Acker was a graduate student at Kansas State in Manhattan, he dissected two human livers from cadavers brimming with cysts. Action should be taken now, he said.

“Are we going to wait till somebody dies or try to keep somebody from dying?” Acker said.