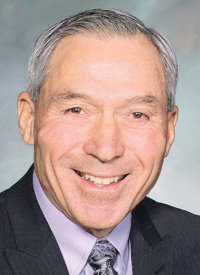 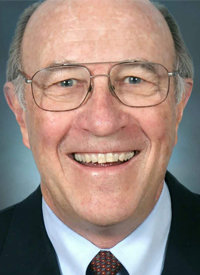 Some more conservative members of the local Republican Party are “looking for somebody to be their puppet, not to think on their own and look for what’s best for Wyoming,” Kost said at a panel discussion last month. “... And I’m not going to take that step. I’m not somebody’s puppet; I’m here to make the best decisions for everybody.”

Standing up to the loudest voices can be intimidating, the lawmaker said, but he doesn’t believe they represent most citizens.

“It’s not a comfortable place to be, but it’s the right place to be, at least I think. I feel like we have to stand true to what we think is best …,” Kost said.

He said the current split in the Republican Party might as well represent two different parties, since some have decided to attack members of their own party instead of Democrats.

Kost made the remarks at a Sept. 19 discussion hosted by Wyoming Rising, titled “Democracy 2021: The Future of the 2-Party System.”

Sullivan, who served as governor from 1987-1995, said he prefers to view the glass as half-full rather than half-empty, but “recently, it’s been more despair than optimism.”

He recalled working with a heavily Republican Legislature to get things done, but he said things have changed since then: becoming more tribal, with more intra-party squabbling and less civility.

Sullivan said Americans seem to have become unable to look at what is and is not true, have come to see compromise as a four-letter word and to view pragmatism as weakness, no longer seeing incremental progress as better than none.

“I’ve always had great confidence in the voters. And I hope the pendulum will swing back,” he said. “But I have concerns.”

Speaking to the dominance of Wyoming’s Republicans, Sullivan said a party becomes dysfunctional when it becomes too powerful and he said there’s a certain toxicity. He specifically alluded to ongoing efforts to add a run-off election after Wyoming’s partisan primary.

“Somehow the discussion about elections is not who should get elected, but can we elect the candidate, even on our own side, with the purity that we want?” Sullivan said. “And so we’re talking about changing the election law in order to get that done.”

Simpson, a Cody resident who served in the Wyoming House for 12 years and another 18 in the U.S. Senate, said he wouldn’t be able to get elected in the current environment.

“The two-party system has failed because it’s all done in the primary, and if you’re too progressive they’ll put a guy against you and run you out,” he said of Republican leaders, adding, “So there’s a purification process, which in many ways is totally unhealthy. But that’s what’s going on in the Republican Party.”

Simpson decried the growing involvement of GOP officials in directing the votes of elected officials — a move the party leaders have described as being aimed at accountability. In more than 30 years as a lawmaker, Simpson said he never received correspondence from the chairman of the Wyoming Republican Party telling him how to vote.

“That is the nuttiest thing I have ever heard of,” Simpson said, adding, “if you really believe that, send a zombie to Cheyenne, because it’s going to be done by Frank [Eathorne, the chairman of the Wyoming Republican Party] and his pals.”

He said elected officials should be focused on things like the solvency of Social Security and nuclear waste, but are instead talking about “gays, lesbians, transgenders, abortion.”

Later expanding on Simpson’s remarks, Kost said some of the political topics being talked about today are “crazy.”

Kost stressed the need for people on both sides of the political aisle to find middle ground where they can work together. He cited the late U.S. Sen. Mike Enzi’s admonition to work and focus on the 80% of things where there is widespread agreement, rather than 20% where there is real contention.

“Our job is to do the best we can for all of our state, not only for a particular entity, and that seems to be where we’re losing it now,” Kost said. “And that’s sad.”

He encouraged voters to look not at a candidate’s political party, but their integrity and values.

Ben-David, who fell to Republican Sen. Cynthia Lummis in the 2020 election, stressed the need to look at facts and to respect one another, even in the face of differing beliefs.

“If we treat each other with respect, and we are willing to listen to the experts, just as you know, we should, I think we have a really good opportunity to change the climate in our state, and move forward with the challenges we face ahead …,” she said.

Sullivan did say that attending Sen. Enzi’s recent funeral — which drew nearly two dozen senators from both political parties — encouraged him that the country will get through what he hopes is “a brief bad patch.”

He added that, during his time as the U.S. Ambassador to Ireland, he saw the respect and admiration that those in foreign countries hold for American democracy.

“While I think that may have been tarnished a bit in recent years, I believe it’s still there. We are the leader of the free world,” Sullivan said. “And people may disagree with our positions, or disagree with policies that we take, but they expect us to lead — and I believe we have the capacity and we have the ability to do that.”