Locked away in a small, isolated room in the back of a shop at Diamond Wings Upland Game Birds, a sleep-deprived Karl Bear watched history being made. 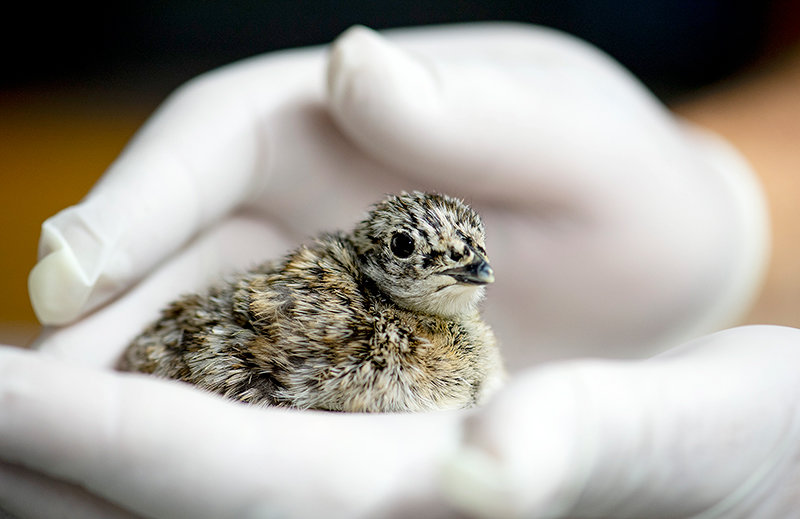 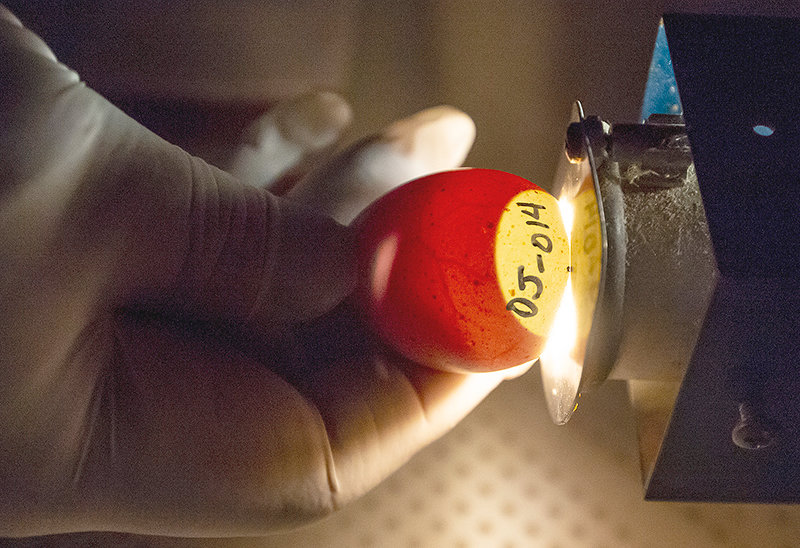 Karl Bear ‘candles’ a greater sage grouse egg prior to it hatching. Eggs were labeled to reveal where and when the eggs were harvested in the wild and the resulting chicks will carry the ID on leg bands throughout their lives in captivity.
Tribune photo by Mark Davis 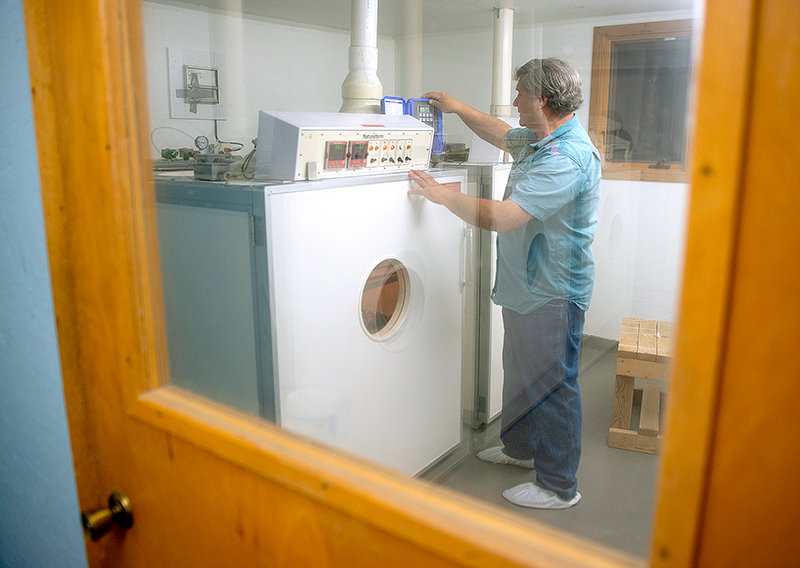 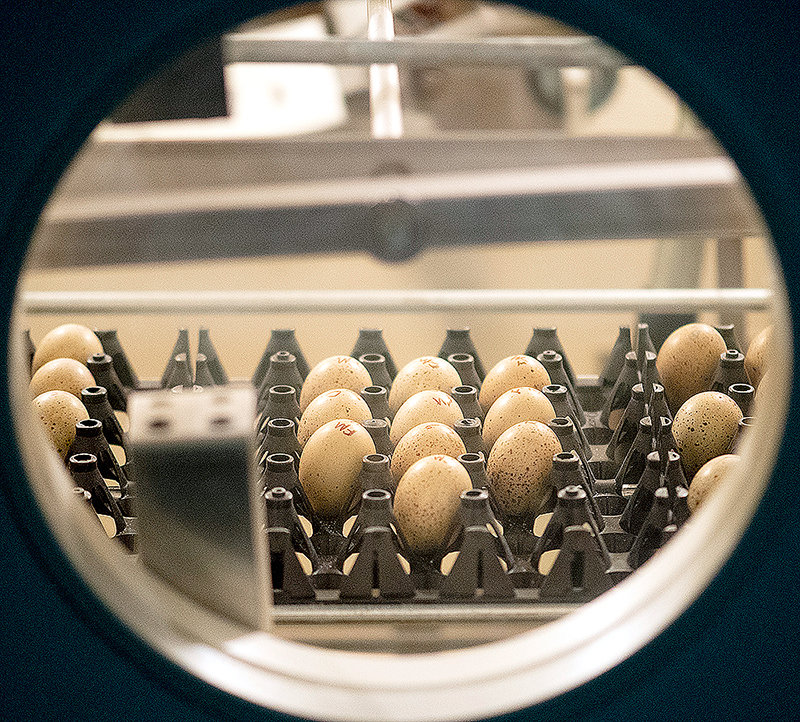 Wild sage grouse eggs, which are smaller than chicken eggs but larger than quail eggs, can be seen in Diamond Wings’ incubator. The commercial venture collected 99 of the 250 eggs allowed this year under regulations set by the Wyoming Game and Fish Department.
Tribune photo by Mark Davis
Previous Next
Posted Thursday, May 20, 2021 8:25 am
By Mark Davis

Locked away in a small, isolated room in the back of a shop at Diamond Wings Upland Game Birds, a sleep-deprived Karl Bear watched history being made.

At 3:30 p.m. Monday, wild greater sage grouse chicks started to break out of their shells, stumbling into the controlled environment inside a state-of-the-art industrial hatchery. With persistence, each got their wobbly legs working, gaining the confidence to explore the platform and introduce themselves to their siblings.

It marked the first time a commercial enterprise has ever been successful in collecting wild eggs and incubating and hatching chicks in an attempt to raise and breed in captivity the iconic bird species of the West.

Twenty-four hours later, seven chicks had hatched from the first seven eggs that the Powell company collected under the watchful eyes of Wyoming Game and Fish Department biologists and game wardens near leks throughout the state.

With each new chick, Bear’s tired eyes lifted in excitement — much in the same way they did at the arrival of each of his and wife Stacy’s five children, he said. While Bear has raised millions of game birds over the years — succeeding with some hard-to-rear species where many have failed — this is the first time he’s had to act as a parent to wild chicks. Diamond Wings owner Dennis Brabec calls him “the sage hen.”

Bear started the game bird farm 26 years ago as a hobby to spend time with his children. None of them have stayed with the company, but it has grown to become the largest bird farm in the three-state area, often delivering birds by the thousands as far away as the West Coast.

But the sage grouse eggs are unlike Bear’s current inventory of farm-raised chukars, pheasant and Hungarian partridges. When Bear gathers eggs from pen-raised birds at the farm, it’s prior to incubation and they can be stored in an industrial refrigerator until he has time to begin incubating. Done this way, he can hatch thousands of chicks at the same time, making the process easier to control and more efficient.

However, he’s now dealing with wild eggs that are already in the process of being incubated by their mothers. Each clutch has separate incubation dates, meaning Bear needs to be on hand 24/7, checking the eggs and watching for the right moment for a move from the incubator to the hatchery. Then, once the chicks hatch, they have to be moved to the brooder room and essentially hand-fed an appetizing mix of bugs and plant proteins until they’re old enough to fend for themselves. The next seven days are critical in the survival of the young grouse, but Bear remains positive.

“I have my little trade secrets,” Bear said.

It’s a tough process that lasts between 21 and 28 days for incubation (depending how long the hen was on the nest) and then at least another six weeks before the birds can be moved to segregated flight pens to grow into adults and possibly become the farm’s future brood stock.

April 28 was another big day. It was then, with Game and Fish representatives in tow, that Bear and members of the Diamond Wings team finally collected their first eggs. They had failed to locate a viable nest last year despite the use of drone technology, bird dogs and 20 days of walking hundreds of miles through the area’s vast sagebrush steppe.

The failed effort set the company back a year and cost them tens of thousands of dollars in lost game bird revenue, as regulations require the company to keep other species away from the special sage grouse production facility.

This year, the Diamond Wings team deployed GPS transmitters on hens, tracking them via satellite until they had a full clutch. The process was more efficient, which was better for the nesting sage grouse, said Leslie Schreiber, sage grouse program manager for the Game and Fish. “The key point with telemetered hens, there’s minimal disturbance.”

There’s also the benefit that, after the eggs were collected, the Game and Fish could see if the hens re-nest, Schreiber said. While she has a master’s degree in wildlife biology and sage grouse is her specialty, much of what is happening now is new information.

“Once the eggs are picked up, that’s a step that I know nothing about,” she said.

Telemetry is labor intensive and expensive, but failing could have meant the final nail in the coffin for the first-of-its-kind experiment. The Wyoming legislation that allowed the bird farm to participate in the experiment has a five-year sunset clause — and this is the fourth year the team has been trying to complete the experiment.

“It was important that we had positive results this year,” Bear said. “It could have been sooner, but the technology was so expensive.”

The Western States Sage Grouse Recovery Foundation, founded by former Diamond Wings owner Diemer True, has footed the bill for the construction of the facilities, new equipment and labor to complete the experiment. It has also helped defray the cost of lost revenue on the farm.

Schreiber has been involved in the process since the law was passed. State officials are not allowed to help in any way, but are mandated to escort teams in the field and have done multiple inspections of the farm as it transitioned to meet Game and Fish regulations.

Bear, Diamond Wings’ manager, has been certified to attempt the experiment for the past four years. This is the first year the effort has moved to the lab and Bear is feeling a great weight on his shoulders. He’s confident, but this has been a hard fought battle.

Critics — including most conservation organizations and scientists — have been against the project from the start. Many opponents feel that, if the experiment was to be done, it should be completed by government or university scientists. Bear understands their complaints, but admits it hurts.

“They all hope we fail,” he said, adding, “There are lots of eyes looking at us. And you know, there are so many negative folks that felt we not only shouldn’t do it, but couldn’t do it.”

But Bear does have some help: Scientists from Colorado, staff at the Sutton Avian Research Center, contacts at the Devonian Wildlife Conservation Centre at the Calgary Zoo in Canada and the Meeteetse Conservation District have all assisted during the process.

The Devonian Centre made history last year, being the first facility in the world to successfully breed and raise sage grouse in captivity.

“Saving greater sage-grouse is important, but it is not easy,” said Dr. Axel Moehrenschlager, the Calgary Zoo’s director of conservation and science. “I am proud of the progress that has been made in founding a vibrant reintroduction breeding program that can assist wild populations for years to come.”

While not a trained biologist, Bear has been persistent in his studies of raising birds and has doggedly sought all options for information on raising and conserving sage grouse.

While his efforts are under tremendous scrutiny, making U.S. history has given him a short opportunity to celebrate. But from here the process only gets harder. Angi Bruce, deputy director of the Game and Fish, points out that hatching wild eggs is far from the largest test Diamond Wings will face.

“The hatching of eggs was no surprise,” she said. “Eggs hatch in an incubator pretty easily. I would say the most challenging part will be on the release of the birds and the concept behind the release — what they’re trying to achieve with the release — and then the success of that release. In our minds, that is going to be the biggest challenge.”

Bear is taking it one step at a time. He’s not concerned with getting to the point of releasing birds into the wild, because that’s not the purpose of this experiment, he said — at least for now. “Our only goal right now is to see if we can breed these, and to have diversified genetics,” Bear said.

Any release into the wild in Wyoming would have to be done so at the discretion of Game and Fish officials and seems unlikely due to the controversial nature of the experiment.

But Bear isn’t going to let speculation bring him down. If anything, the harder the task, the harder he works.

“My passion is growing,” he said. “It usually goes the other way in life, but it’s exceeding more than I ever thought it would.”