“I also wanted something special for the dancers, so they had something every year that they could really look forward to ... really push for,” said Fernandez, founder of Rocky Mountain School of the Arts and Rocky Mountain Dance Theatre in … 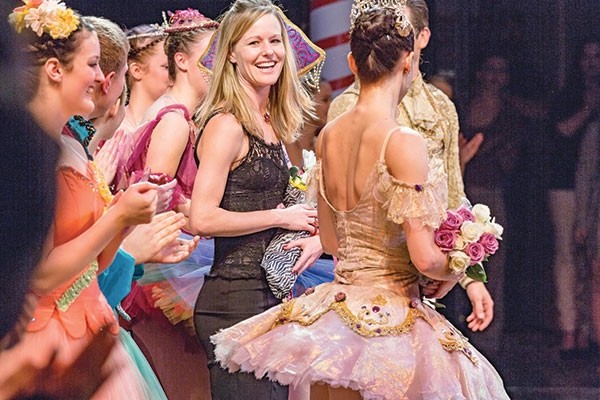 Rocky Mountain Dance Theatre founder and artistic director Elizabeth Fernandez (center) brought The Nutcracker to Cody 20 years ago. The ballet has become a local holiday tradition. ‘It’s a huge part of my life, and so many dancers, and the community,’ Fernandez said.
Photo courtesy Craig Satterlee
Posted Friday, December 8, 2017 4:09 pm
By Tessa Baker

Shortly after opening a dance studio, Elizabeth Fernandez wanted to bring a special performance to the community.

“I also wanted something special for the dancers, so they had something every year that they could really look forward to ... really push for,” said Fernandez, founder of Rocky Mountain School of the Arts and Rocky Mountain Dance Theatre in Cody.

Fernandez had always loved performing in The Nutcracker, and she appreciated the ballet’s rich history.

“There’s something magical about The Nutcracker. There just is ...,” Fernandez said. “I wanted my students to have the opportunity to be a part of that magic.”

In December 1997, she brought The Nutcracker to Cody for the first time.

“I never really thought about how, or any of the logistics, or how I was going to get the money, or the fact that I didn’t have a single costume. I just was like, ‘I’m going to do this,’” she said.

“I look back on that and think about how crazy that was,” Fernandez added with a laugh.

Twenty years later, The Nutcracker has become a local holiday tradition — something residents in Cody, Powell and surrounding communities look forward to each December.

Even though the classic Christmas ballet features the same music and same basic storyline, the show isn’t mundane.

“Every year, we try to make some sort of a change, whether it’s some sort of special effect or costuming. I change the choreography a lot,” Fernandez said.

“It follows the basic story of all Nutcrackers, but ours has a little twist to it,” she said.

The dancers also change roles from one performance to the next.

Between 100-120 local kids perform in The Nutcracker every year.

While most kids are from the Cody area, others come from Powell, Worland, Ten Sleep and surrounding towns.

Featuring so many children in the cast is unique among dance companies. Most performances of The Nutcracker feature some local kids in a few scenes, Fernandez said.

“Ours is really based around the children of the community, so it’s completely different. But also with that, it’s still a very professional production, so I think there’s an interesting balance that has to be played there,” she said.

Some of the tiny dancers are as young as 3 years old. Dressed as Hershey’s kisses, the little ones are a crowd favorite.

“I always say, the kisses steal the show, and they do the least amount of work,” Fernandez laughed. “They’re so cute.”

Fernandez said she has enjoyed seeing the young students learn and grow into accomplished dancers.

“It’s fun. They start as these little tiny kisses, and I always tell their parents, ‘Someday they’re going to be the Arabian leads or even Sugar Plum or Clara,’” Fernandez said.

“They get on stage and do things I never thought possible,” she said.

It’s also fun to see the younger dancers aspire to what the older students are doing, she said. Soon after kids finish dancing in The Nutcracker, they start talking about what parts they want next year.

“Every year, I’m in awe of how much it does mean to the kids who are here,” Fernandez said.

The more advanced dancers start preparing for their roles in The Nutcracker in August.

“For them to master their roles, it takes a lot of time and practice,” Fernandez said. “They start really early.”

Each year, professional dancers join the Rocky Mountain Dance Theatre production as guest artists. Natalia Magnicaballi and Michael Cook from The Susan Farrell Company of Washington, D.C., are returning to Cody for The Nutcracker this year.

“They’ve been our guest artists for the last several years,” Fernandez said.

She said they enjoy working with the kids, and help them in their roles.

Over the years, Rocky Mountain Dance Theatre has partnered with dancers from the New York City Ballet, The Juilliard School and Joffrey Ballet.

Visiting artists appreciate the close-knit family that the studio has become.

“In Cody, we have this little dance company, and it’s an inspiration to people who come from these big companies all over the world, and that’s a really cool thing, I think,” Fernandez said.

She said she appreciates all the ways the Big Horn Basin has supported The Nutcracker over the past 20 years.

“What’s amazing to me is the community support that we do receive,” she said. “And that it has become magical for a lot of people.”

at the Wynona Thompson Auditorium in Cody

For tickets, go to www.rockymountaindancetheatre.org/nutcracker or The Thistle in Cody