Is there a haunted room where guests have reported strange incidents?

Have spirits checked into the 111-year-old hotel — and remained?

Some people believe the answer to all three of those questions is yes. One reason is Room 35. 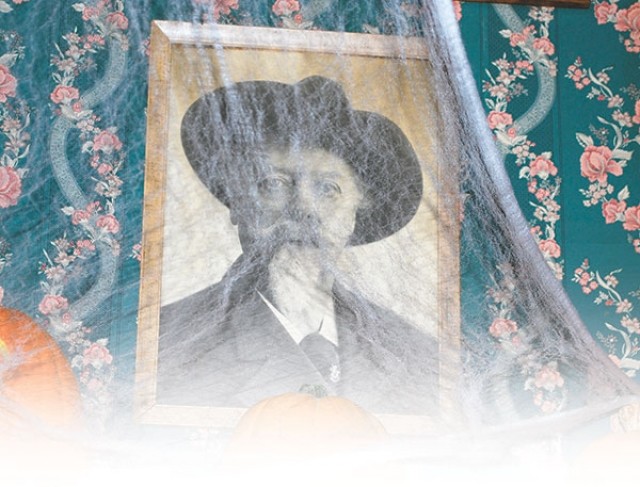 A portrait of Buffalo Bill Cody peers out from behind a cobweb decoration added to the hotel during the Halloween season. Cody, who built the hotel in 1902, died in 1917, but some say his spirit still lingers in his hotel.
Tribune photo by Tom Lawrence
Posted Thursday, October 31, 2013 8:50 pm
By Tom Lawrence

Are there ghosts in the Irma Hotel?

Is there a haunted room where guests have reported strange incidents?

Have spirits checked into the 111-year-old hotel — and remained?

Some people believe the answer to all three of those questions is yes. One reason is Room 35.

It’s one of the original 15 rooms in the hotel, which opened in 1902; two additions over the years have brought the number of rooms to 39. The legendary Buffalo Bill Cody named it for his daughter Irma.

Room 35 is the scene of many of the ghost stories in the hotel. Paranormal investigators have spent the night there, seeking to discover its secrets.

Late at night, a walk down the narrow hallway to Room 35 is in itself unnerving.

“The hallway is creepy,” said front desk clerk Tim Lamb. “It’s like something out of a movie. That’s what gets people in the first place.”

Some claim to have heard disembodied voices. A guest of the hotel named Deborah said she spent the night in Room 35 once and “there was a lot of activity in there” all night long. She was a firm believer the room is haunted.

Room 35, which is known as the Paul Stock room, is a small room with three beds in it, two singles and a double. A poster of Buffalo Bill’s Wild West is under glass on one of the walls.

Stepping inside the room, your skin is struck by how cold it is. The hallway and other rooms are comfortable, even hot in places. But Room 35 is icy as a tomb.

After spending a few minutes examining the room, we shut off the lights to see what might happen. It’s likely because of the legends about the room, and the stories we had just heard, but I felt, well, something was out of the ordinary.

It was rather frightening, and we didn’t linger much longer. My girlfriend Whitney called out to the ghosts, and was eager to meet them. I just wanted out of Room 35.

Lamb said some people stay in the room and report nothing out of the ordinary. Others request the room, hoping to see or experience something from the other side, he said, and some claim they do.

There are reports of guests being awakened in the night by a cold hand, but finding no one there — at least no one who was visible. Others have reported hearing knocking on the walls and ghostly footsteps in a deserted hallway.

Some people claim to have seen ghosts, including the torso of a man in a cavalry uniform.

We stayed in the Buffalo Bill Suite, Room 12, and nothing too eerie happened, although Whitney thought she may have spotted a spook early Sunday morning. A strange light did seem to flit around the room, but I did my best Don Knotts impersonation, shut my eyes tight and went back to sleep.

We tried to make Ol’ Bill feel relaxed around us, and greeted him when we entered the room. Perhaps he appreciated that and decided to leave us alone.

The rest of the hotel also has been the scene of ghostly reports. Employees said they sense Buffalo Bill’s presence, and some say they have caught a glimpse of him.

The Irma has numerous mirrors on its walls. There also are a fair number of men wearing long, droopy mustaches, as Cody did, walking about.

Perhaps people are catching a reflection of a guest — but maybe the original owner is stopping by to check on his investment, and that is what they are witnessing.

Spurs jangled in the hotel bar once, Rex recalled, the kind of spurs that Buffalo Bill Cody himself wore. When she went to see who was there, the room was empty — or at least no one was visible, she said.

Rex said a stack of glasses moved, apparently on their own, and a tray packed with glasses somehow tipped over. Water runs on its own, and toilets flush with no human hands on them.

Some believe, some don’t

Of course, there are rational explanations. The Irma has steam heat in some rooms. Owner John Darby said steam can push water through the lines, turning on taps and causing toilets to operate.

Darby, 81, first bought the hotel in the 1980s, but he traded it for a ranch after a few years. But he bought it back in 1989 and has operated it ever since, along with his sons Mike and Scott, who are co-owners.

While one of the longest-serving employees, Jenny Riley, insisted she had seen ghosts during her 42 years at the Irma, Darby said he has not spotted a single spirit.

“Some people believe it, some don’t believe it,” he said. “All the help sees it, but I don’t.”

A photograph near the famed cherrywood bar, a gift from England’s Queen Victoria, shows the hotel in its early days. Reportedly, a ghost appears in a corner of the photo from time to time, Darby said.

A study of the photo three weeks ago didn’t indicate any spectre lurking in a corner, but the inspection was done in the light of the day while breakfast was being served.

Some say the ghosts are much more lively during the night.

Steve Franklin, a host at the Irma, said he’s unsure what to believe, but one incident always has made him wonder.

He was alone and doing an audit around 2 a.m. when he heard a loud noise. When Franklin went to check on it, he found a large marquee that announced meal specials had fallen on the floor.

He picked it up, put it back in place and returned to his work. About an hour later, he once more heard a noise, and this one was even louder.

“The marquee was 20 feet away” from where it had been before, Franklin said. “That kind of bothered me. There was nobody in here but me.”

There have been efforts to cleanse the hotel of its spectral guests. Darby said a Crow medicine man walked through the halls, seeking to “chase away all the evil spirits.”

But some employees insist the the hotel’s ghosts have lingered and appear when the mood strikes them. Sometimes, they choose to appear before people.

Darby said he’s glad people believe the Irma is haunted, and he offered this piece of advice.

“Tell them there’s ghosts,” he said with a smile. “It’s good for business.”