Take notice, Wyoming. Last month, the Biden administration proposed a rule that, among other things, attempts to transform a long-standing grant program aimed at improving U.S. History and Civics … 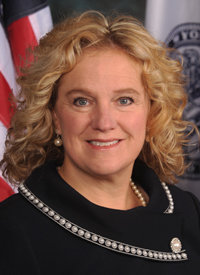 Take notice, Wyoming. Last month, the Biden administration proposed a rule that, among other things, attempts to transform a long-standing grant program aimed at improving U.S. History and Civics education in K-12 into a push to divide our students and country. The program is voluntary and prioritizes states that teach concepts rooted in critical race theory, or CRT, for grant funding. Among others, it names the New York Times’ “1619 Project” and CRT theorist and author, Ibram X. Kendi.

This is problematic for two reasons: 1) the federal government should not be pushing specific curriculum onto states and 2) it attempts to normalize controversial political theory as the foundation of K-12 history and civics instruction.

My experience is that most everyone wants a balanced and comprehensive view of American history taught to our children, one that highlights the enormous sacrifices our forefathers made to bring freedom to America, but is also honest about the history of slavery and discrimination. According to a national survey by Parents Defending Education, 74% of Americans said they oppose teaching students that white people are inherently privileged and black and other people of color are inherently oppressed. Unfortunately though, the voice of radicals who believe otherwise, is very loud right now and gaining traction with critical race theory.

This is not a red versus blue issue. This is a debate about where control over what is taught to our kids rests — with local school districts and states, or the U.S. Department of Education. It is also an issue of culture.

Under the proposed rule, schools and states may  be rewarded for teaching content that minimizes progress made by Americans of all races, and ignores key aspects of the U.S. Constitution and Civil Rights laws. Instead, all states should be expected to teach children in ways that promote our American culture that is based on fairness, understanding, diversity, and humanity (albeit, we need to do a much better job of prioritizing this in every classroom).

How do we preserve the American treasure of the Bill of Rights in schools and push back on this radical thrust to undermine Martin Luther King Jr’s American dream, a dream that I share, that the content of a person’s character matters more than one’s skin color?

First we must understand a bit about critical race theory. CRT teaches that the only way to change our racist ways is to become more racist, more discriminatory — especially against privileged white oppressors.

CRT is not a world view; it is a call to action. We saw it come to fruition last summer as rioters tore down monuments and destroyed businesses. Critical race theorists, just like Marxists, aim to destroy, or dismantle the system of America and start anew.

Alongside Critical Race Theory is the 1619 Project. The project started as a series of essays that comprehensively presented American history through the lens of slavery and oppression. The project evolved into K-12 teaching resources, podcasts, lectures, and more. The theme of the 1619 Project — that America was founded to preserve slavery and that our country has made little to no progress in the areas of racism and discrimination — has been debunked by historians and journalists.

There is no evidence that critical race theory is being expressly taught in Wyoming. But it is creeping into our schools. People with good intentions can be misinformed or misled, especially when CRT (although not called that) surveys, resources, and curriculum are free, popular, and easy to access.

As a former teacher, I would not

Second, we must uphold that America IS exceptional. Every child deserves to learn about and experience this firsthand. In school we must lift up all Americans, and empower students to understand history in ways that are not demoralizing or divisive.

Here is what we can do:

1. School boards in Wyoming must prioritize social studies in public discussions, board action, and with funding. This is a tricky proposition all around, but it is vital. We want our students to learn to weigh diverse perspectives critically, and we cannot get there without this commitment from school district leaders. Board action can include resolutions and greater transparency about curriculum being used in classrooms.

2. Our laws appropriately protect a free and democratic society. Legally enforced racism ended with the Civil Rights Act of 1964. Critical race theory is not always called such in classrooms.

Teachers, parents, and school leaders should be on the lookout for classroom activities that divide students based on race or any other attribute, or that compel students or teachers to affirm their role in fighting purported white oppression. This is illegal, period.

3. The Wyoming Legislature should prioritize this issue every year to induce an honest and public debate.

As your state superintendent, I’ve taken a strong stand against critical race theory and for a more comprehensive social studies education for all Wyoming students — one that acknowledges our injustices as well as our progress for all races, cultures, and individuals. I will continue, unapologetically.

I have found the Foundation Against Intolerance and Racism (FAIR) to be an excellent resource for information about critical race theory in America. The website is www.fairforall.org.

(Jillian Balow is Wyoming’s state superintendent of public instruction, based in Cheyenne. She was elected to a second four-year term in 2018.)