Study shows Yellowstone bison have positive effects on the landscape

After a 10-year study, researchers say their findings confirm that wild bison shape vegetation cycles and enhance growth throughout the summer in Yellowstone National Park.

Study shows Yellowstone bison have positive effects on the landscape 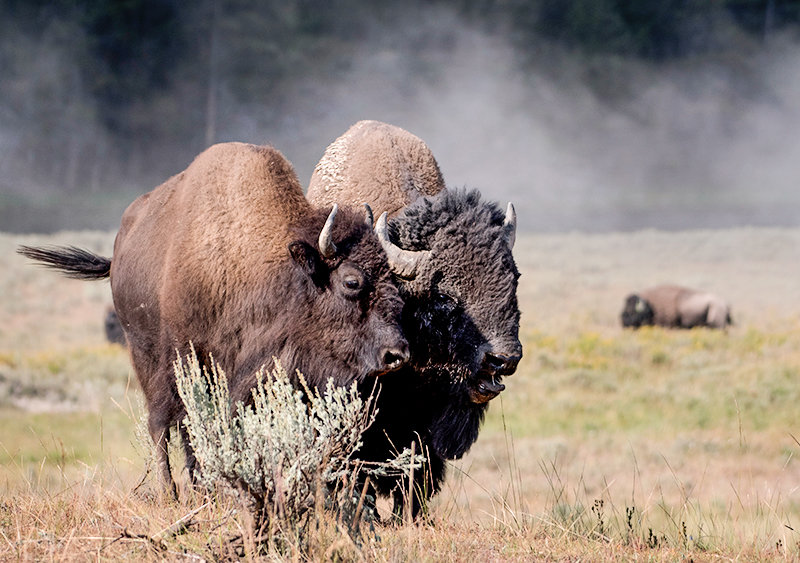 Bison migrate differently from other animals in Yellowstone because of how they graze, frequently returning to the same areas of the park, according to a 10-year study. This bison pair was pictured during the rut in August 2018.
Tribune photo by Mark Davis
Posted Tuesday, November 26, 2019 8:10 am

After a 10-year study, researchers say their findings confirm that wild bison shape vegetation cycles and enhance growth throughout the summer in Yellowstone National Park.

Scientists discovered — with the help of NASA satellites — that areas grazed intensely by larger groups of bison greened-up earlier, more intensely and for longer durations each year.

Biologists from the National Park Service, U.S. Geological Survey and the universities of Wyoming and Montana published their findings about bison migration and grazing in Yellowstone in the Proceedings of the National Academy of Sciences this week.

The findings result from a decade of research on Yellowstone bison by National Park Service biologists which included putting GPS collars on bison, setting up field experiments to evaluate plant growth and grazing intensity, and collecting dung and plant samples.

The findings also indicate that bison migrate differently from other species because of how they graze, frequently returning to the same areas of the park, which keeps plants in a growth cycle, providing the most nutritious food for migrating animals. Evidence over the last decade indicates that migrating ungulates (hooved mammals) follow the wave of spring plant growth.

Bison begin their migrations by following spring green up but their intense grazing lets them fall behind the wave of spring.

“Whereas migratory mule deer closely choreograph their movements so they are in synchronization with the flush of fresh green grass as it moves up the mountain, bison movements are not so constrained,” said Chris Geremia, lead author of the study and senior bison biologist at Yellowstone. “They make their own fresh grass by grazing intensely in large aggregations.”

That finding sets bison apart from other North American ungulates. The bison population in Yellowstone is one of the only free-ranging populations in North America. Animals migrate more than 60 miles in the park.

During the study, comparative plots among fenced and grazed areas showed grazing at high intensity delayed plant maturation by stimulating plants to produce new young shoots after being grazed. Bison then frequently returned to graze the same areas, keeping plants growing, although the plants never appear more than a few inches tall. Short, young plants provide the most nutritious foods for migrating animals.

“These unprecedented findings teach us about the complexities of wild bison and underscore the critical ecological role they play on the Yellowstone landscape,” Sholly said.