Caught off-guard by a June snowstorm in the Beartooth Mountains, a driver had to be rescued from U.S. Highway 212 early Saturday morning. 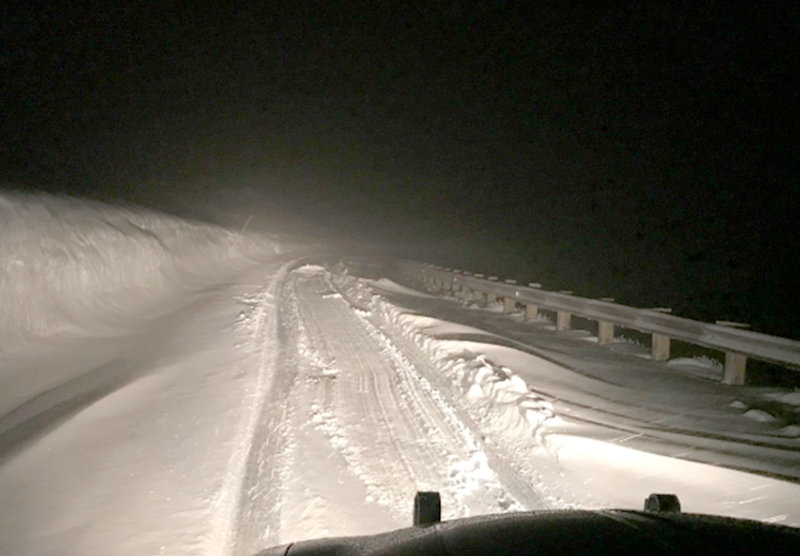 A plow truck from the National Park Service and a trooper with the Wyoming Highway Patrol helped rescue a North Dakota man, who got stuck in a Friday night/Saturday morning blizzard on the Beartooth Highway.
Photo courtesy Wyoming Highway Patrol
Posted Tuesday, June 11, 2019 8:30 am
By CJ Baker

Caught off-guard by a June snowstorm in the Beartooth Mountains, a driver had to be rescued from U.S. Highway 212 early Saturday morning.

The 59-year-old man had been heading east on the Beartooth Highway, traveling from Red Lodge, Montana, to Cooke City on the mountainous route on Friday night. It was there, in Beartooth Pass, that the North Dakota resident had the misfortune of running into a late spring blizzard.

“A few miles inside the Wyoming line is where things started to get really windy and heavy snow and drifting,” said Wyoming Highway Patrol Lt. Lee Pence. “And he happened to drive into a snowdrift and got a little bit high-centered and was stuck there.”

Although the man didn’t have full cell service, he had enough access to text his wife, who called authorities. The Wyoming Highway Patrol was notified around 12:30 a.m. Saturday.

A friend of the motorist attempted to reach the man in a four-wheel-drive truck, but had to turn back because of the snowdrifts — which measured 3- to 4-feet high in spots.

Pence was similarly unable to make it up U.S. 212 in the nasty conditions and he contacted the National Park Service, which plows the Wyoming portion of the highway. They dispatched a plow truck from Cooke City to clear the way to the stranded driver; the truck and Pence reached the man around 5:14 a.m. Saturday and dug him out of the drift, around milepost 32.

“He did have a full tank of gas, but he didn’t have provisions for the winter,” Pence said of the driver, who was unharmed. “When we got to him, he’d gotten out and he said, ‘Man, I’m sorry, but I didn’t plan on snow.’ It was 90 [degrees], I think, when he left North Dakota.”

Pence isn’t sure exactly how cold it got in the Beartooths on Saturday morning, but guessed it was in the low 20s.

“It was cold enough to make me put all my winter gear on,” including his face mask, he laughed.

Pence said the stranded driver probably would have been fine until morning, “but had the vehicle not stayed running, he could have had some issues.”

“He said he didn’t expect us to make it there until daylight,” Pence said. “But obviously we get that call, we plan for the worst. So we weren’t just going to let him sit up there.”

Had the Park Service not been able to send a plow truck that morning, the lieutenant said his next call would have been to Park County Search and Rescue.

The patrol took the opportunity to remind drivers to check weather and road conditions before traveling.

“Although the calendar shows June, conditions can quickly change in Wyoming, especially in the mountains,” Sgt. Jeremy Beck of the Wyoming Highway Patrol said in a release. “It’s important to always be prepared in case you become stranded, in hot or cold weather. Make sure you have enough fuel and provisions to survive.”

Beck also encouraged drivers to research conditions along their planned route, including by visiting www.wyoroad.info.

“It’s important you know before you go,” Beck said.

The Beartooth Highway was open at the time the North Dakota driver ran into the storm; the Wyoming Department of Transportation closed the Beartooth Highway due to the wintry conditions shortly after his rescue, around 6:42 a.m. Saturday, according to WyoRoad.info. The high-elevation highway remained closed on Monday afternoon, with the site reporting that “the estimated opening time is unknown.”