Imagine a large parking lot filled with cars across from the Cody Stampede. Tourists, finding adventure on their way to the East Gate of Yellowstone National Park, wait in line for space on a tram that scales the north face of Cedar Mountain. At the … 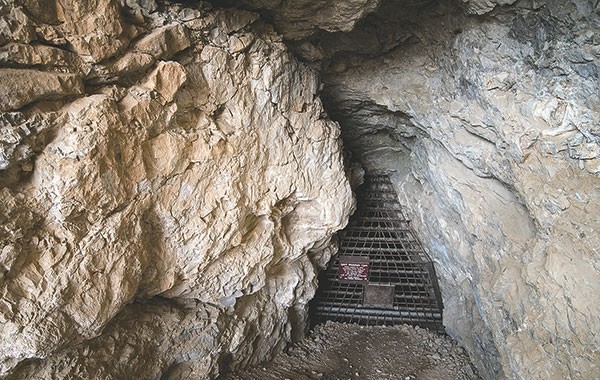 A heavy steel gate, put in place by the Bureau of Land Management, bars the entrance to Spirit Mountain Cave, formerly known as Shoshone Cavern National Monument. Visitors to the cave are now required to get a permit from the BLM to explore the cave.
Tribune photo by Mark Davis 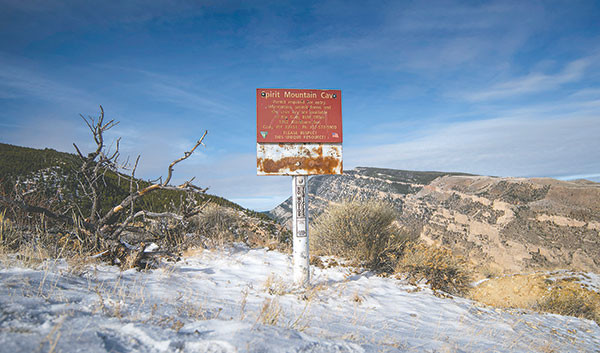 A simple sign marks the beginning of the trail at a small parking lot near the entrance to Spirit Mountain Cave. After a rough start to the trail, it evens out for an easy hike until a steep dropoff just before arriving at the entrance to the cave. Tribune photo by Mark Davis 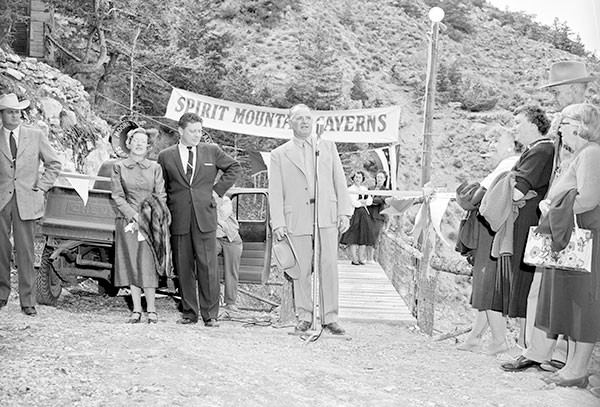 It’s hard to find more dramatic differences between “what could have been” and “what is” than at Spirit Mountain Cave.

Imagine a large parking lot filled with cars across from the Cody Stampede. Tourists, finding adventure on their way to the East Gate of Yellowstone National Park, wait in line for space on a tram that scales the north face of Cedar Mountain. At the top, tours of a vast 2,000-foot deep cave sparkling with crystals excites vacationing families.

It could have been a main attraction, beckoning more travelers to use the East Entrance and possibly even holding tourists, with their fat wallets, a little longer before they disappeared into the Shoshone National Forest and beyond.

“What is” pales in comparison. The first literal sign of what could have been starts around the corner on the unmarked, Spirit Mountain Road. Travel up the road isn’t especially wise for the average family sedan or flatland-loving tourists. On the climb to the cave entrance several campfires scar the scenery despite being prohibited. Short walks near the fire pits reveal litter and vandalism — mostly graffiti.

Finding a view without spray painted messages is hard to find. Jeff’s love for Kelly, painted in sloppy blue lines, is about as educational as it gets. Another message, “Eat Out Tonight,” presumably left by “Scott” welcomes visitors near the mouth of the cave. A heavy metal cage blocks the entrance and a permit granted by the Bureau of Land Management is the only way to get a key.

Just making it to the cave is a journey — not one easily traveled. Once there, only a few will make it inside. And none of the few will ever witness the sparkle of the tons of crystals.

The attraction was a national monument, just like Devils Tower and the Grand Canyon. It was renamed Shoshone Cavern National Monument from Frost Cave, named for Ned Frost, the hunting guide who initially discovered the cave.

“The cave immediately became a site that everyone in Cody needed to take a look at,” said University of Wyoming history professor Phil Roberts. “One person that saw it as a very important potential attraction was Willam F. Cody, Buffalo Bill.”

Soon after its discovery, in 1909, the cavern was designated as Wyoming’s second national monument by president William Howard Taft. The Antiquities Act was designed to allow presidents to act quickly to protect significant archeological sites from those willing to loot its treasures. It was so popular when first discovered, visitors would walk the then undeveloped three-hour trail to the cave, according to Roberts, a graduate of Cody High School. He spoke at the Buffalo Bill Center of the West during the University of Wyoming’s premiere of their Saturday U program in Park County.

The management of the monument was handed over to National Park Service and Yellowstone National Park officials in 1916. Strapped for the money for infrastructure and wanting to develop Yellowstone with the little money that was available, the cave was neglected by the Park Service for decades, Roberts said.

Another problem was getting people excited enough about the monument to make the trip.

“You can see Devils Tower, but you can’t always see a hole in the ground,” he said. “And there are a number [of people] that don’t like caves.”

There was also an access problem once you got in the cave. The interior of the cave is steep and with hundreds of rooms in the huge cave, visitors often became lost.

Claud Brown, the first vendor contracted by the city, pledged to make the cave accessible. Electricity was run to the cave and makeshift ladders and stairs made it easier to navigate the dark, steep terrain. The National Park Service, despite having previously rejected the project, even helped promote the attraction.

But Brown went broke attempting to make the caverns into the popular attraction he envisioned.

“Claud Brown wasn’t able to attract enough visitation to really even keep the electric lights going,” Roberts said. In 1966, Brown turned the site back over to the city.

After Brown went broke, a second vendor promised to realize the attraction’s potential. Instead, large trucks presumed to be carrying materials to the cave were silently stealing its treasures, mining the cave for crystals and stealing its sparkle.

“They were people that came in and promised the moon,” Roberts said. “They were sold a bill of goods. Then they disappeared.”

Few visited the cave at the time. Powell resident Gloria Hedderman remembers it being a fun place for high school students to party.

“We used to drive up there and it was wide open. You could have a bonfire in the big room,” Hedderman said.

By 1977, the city quietly relinquished control of the property to the federal BLM and the cave was gated. Today few know that the cave exists, but those in the know can apply for a permit, said Melissa Higley, BLM administrative support assistant in Cody.

“In the summer it’s really popular,” Higley said. “Some large groups, like the Boy Scouts, explore the cave.”

There is a $20 deposit, returned when explorers bring back the key, and the BLM has hard hats available. Higley has been in the cave and has searched for a signature by Walt Disney, who was rumored to have visited the cave and carved his signature into a wall.

The Antiquities Act has been used to protect significant geographical formations by every president since Teddy Roosevelt passed the legislation in 1906. The Shoshone Cavern National Monument, now known as Spirit Mountain Cave, is one of 11 national monuments to be delisted in the past 111 years.

Because Wyoming was the first state to delist a national monument and there were no rules on how to delist monuments in the 1950s, Wyoming is now the only state to require an act of Congress to designate a site as a monument.

Different reasons have been given to delist the 11 former national monuments. In divesting itself of Shoshone Cavern National Monument, the National Park Service cited other places under its care that “better exemplified a site type,” such as Wind Caves and Carlsbad Caverns.

“Notably, none of the abolished national monuments would meet today’s standards of national significance for inclusion in the National Park System,” according to a 2006 paper published by the NPS, celebrating the 100th anniversary of the Antiquities Act.

During his Saturday lecture, Roberts refused to discuss current politics involved in the designation and maintenance of national parks — mainly due to time restraints. His 2012 book, “Cody’s Cave: National Monuments and the Politics of Public Lands in the 20th Century West,” discusses his take on the issues.