Sleeping Giant is gearing up for the launch of the winter campaign by announcing some management changes, as well as some programs sure to please those looking for fun in the snow. 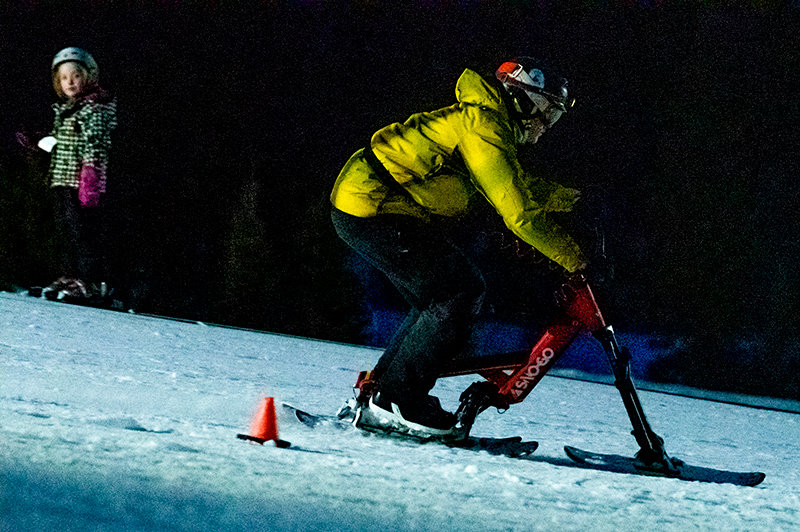 A Sno-Go bike is tested last year as Sleeping Giant Ski Lodge officials tested the new products prior to buying a fleet for rentals for the coming season.
Tribune photo by Mark Davis
Posted Tuesday, September 6, 2022 8:25 am
By Mark Davis

Sleeping Giant is gearing up for the launch of the winter campaign by announcing some management changes, as well as some programs sure to please those looking for fun in the snow.

New this year will be a fleet of Sno-Go bikes, designed to have a blast in the snow and attractive to those new to skiing sports. The former kickstarter company is making inroads at several skiing destinations across the country, now including Sleeping Giant, despite selling out of their products each of the last two years.

Sno-Go co-founders Obed Marrder and Chase Wagstaff grew up surrounded by world-class ski resorts but like millions of others, skiing or snowboarding never really caught on.

“We’ve welcomed thousands of people who never thought they’d like the cold, people who thought it impossible to return to the mountains they once enjoyed, and many who are seeking the thrill of exploring new places,” they said in a recent post.

They developed the bikes to have greater control than models made by other companies and they have been catching fire. Sleeping Giant tested the bikes last season and decided they would be a great addition to the rental equipment list.

The ski lodge also plans to put some new twists on the tubing runs, the terrain park and the new warming yurt, maintaining Sleeping Giant’s position as “the grooviest mountain in Wyoming,” Piazza said.

Travis Gass, former head of ski patrol, has been hired as the new general manager for the popular ski facility. Owner Nick Piazza said Gass will bring a wealth of medical and outdoor experience to the role.

Elizabeth Wells, one of Sleeping Giant’s longest serving employees, has been promoted to lodge manager.

“Her vast experience at the facility, combined with an accounting background, will bring continuity and a level of organization that will greatly serve the mountain,” Piazza said.

Piazza plans to take a step back from the daily operations of the ski lodge due to his heavy involvement in family, friends and investments in Ukraine.

After Russia attacked Ukraine last February, it became impossible for Nick and his wife Yulia, who was born in Ukraine, to concentrate on anything else other than protecting their loved ones and investments in the war torn country. It wasn’t until mid-summer that the couple decided they would start planning for a new year on the mountain, Piazza said.

“I don’t think we probably had any idea if we would open, really, until around July,” he said in a recent interview.

His businesses in Ukraine were hit extremely hard, especially in the earlier parts of the war, he said. Piazza is heavily invested in the agricultural industry.

“A lot of our businesses went through this massive shock,” he said.

But watching a lot of their hard work going up in smoke wasn’t as hard as seeing the disruption to the lives of their employees and family. It was hard to concentrate on the family businesses as bombs were dropping on residential communities.

Piazza said Sleeping Giant posed a moral conundrum. If they used resources to open the ski lodge, it would mean fewer funds to protect their loved ones. Piazza has been financially supporting both Ukrainian troops as well as outfitting American citizens volunteering to fight in the Ukrainian Foreign Legion. They were committed to both causes, but the war took precedence.

“More than business, we were making commitments on a personal level. You know, we were really busy helping friends and colleagues, as well as buying arms and [armored] jackets,” he said, adding “we thought it was the morally correct thing to do.”

The family debate continued for most of the summer, until slowly it became apparent they could handle both as long as they had the right management team in place while they are preoccupied with the war effort and their main business interests.

Piazza remains committed to the facility, saying it’s a “community project” that is important to continue to improve.

“The one thing I learned last year is that snow solves a lot of problems,” he said. “If we get snow, we’re gonna be in good shape.”