“There were tears in my eyes. My sister decided that the wind really didn’t cause the tears.”

More than 60 years later, Zall will again stand at the Heart Mountain site — this time on a sunny August day, watching as Japanese-Americans … 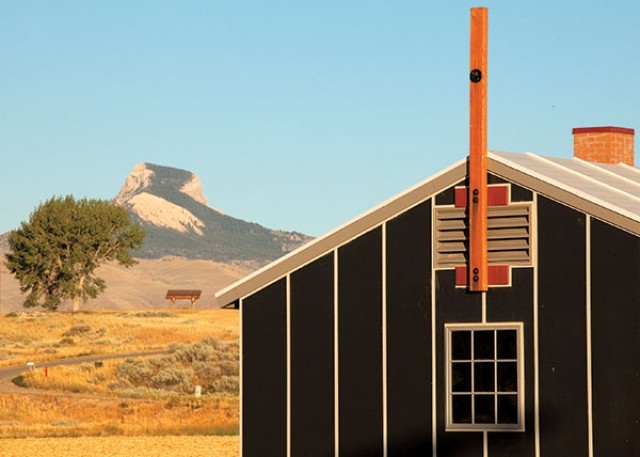 The Heart Mountain Interpretive Learning Center opens this weekend, and as many as 1,000 people from around the nation are expected to gather to celebrate the grand opening and dedication of the $5.5 million, 11,000-square-foot facility.
Tribune photo by Kevin Kinzley
Posted Thursday, August 18, 2011 4:51 pm
By Tessa Baker

As the last train departed on Nov. 10, 1945, young LaDonna Zall quietly watched as Japanese-Americans walked away from the Heart Mountain Relocation Camp where they were confined as internees during World War II.

“It was snowing horizontally, as it does in Wyoming … they looked very cold, and there were soldiers in their long winter coats spaced along the way, their rifles on their shoulders, the bayonets shining in the gray daylight,” Zall recalled.

“There were tears in my eyes. My sister decided that the wind really didn’t cause the tears.”

More than 60 years later, Zall will again stand at the Heart Mountain site — this time on a sunny August day, watching as Japanese-Americans return to the place where more than 14,000 were interned so many years ago.

This weekend’s grand opening and dedication of the Heart Mountain Learning Center brings the story full circle for Zall — now acting curator at the center — and for many former internees and their families.

The new center ensures the stories of the Heart Mountain Relocation Camp — those of wartime sorrow, hope, interrupted lives, unwavering patriotism, agricultural accomplishments and countless others — will be remembered.

“The story of the internment of Japanese-Americans is not just a tragic and too-often overlooked chapter in our nation’s history,” said Former President Jimmy Carter in a message congratulating the Heart Mountain center on its opening. “It’s also a story that offers vital lessons to us, and our children and our grandchildren about how to strike the right balance between our national security and our freedoms and about how to avoid stereotyping and scapegoating Americans on the basis of racial, ethnic or religious backgrounds.”

One of 10 nationwide, the Heart Mountain Relocation Camp opened amid fear and uncertainty in the months following the Dec. 7, 1941 bombing of Pearl Harbor. Some, including President Franklin Roosevelt, were concerned that Japanese-Americans might secretly support Japan, rather than the United States. In February 1942, Roosevelt issued Executive Order 9066, forcing 110,000 Japanese-Americans — the majority of them U.S. citizens — to move from their West Coast homes to relocation camps.

The decision to build a relocation camp in the shadow of Heart Mountain appeared to have blindsided the residents of the Powell Valley — or at least it did the Powell Tribune staff in the early 1940s.

“Ten thousand is a lot of Japanese” read the lead headline in the Tribune’s May 28, 1942 edition.

“Ten thousand Japanese raining down upon the Shoshone Valley would be the biggest event in the way of news that the Tribune has ever had opportunity of publishing,” wrote editor Raymond Baird. “It would be a population half as large as Billings added to the country between Powell and Cody, all in one season.”

Just two months after construction of the camp began, work was completed in early August of 1942, with the first 292 Japanese-Americans arriving on Aug. 11. In just a month’s time, the camp would swell to house 10,335 internees.

“They could put up a barrack in 58 minutes,” Zall said.

A 20-foot by 120-foot barrack contained six apartments. More than 450 barracks spread across the camp.

When they were forced to evacuate the West Coast, internees were not allowed to take many belongings with them — often not more than a suitcase.

The barracks at the relocation camp didn’t have much, either.

Heart Mountain internee Mary Oyama, who wrote a weekly guest column called “Heart Mountain Breezes” for the Tribune, described the typical room as including an army cot, a mattress and a blanket for each person. That was it.

“There were no chairs, no table — no nuthin’,” she wrote in her column.

While the camp had a prominent physical presence at Heart Mountain and internees had some interaction with local residents, many questions remained.

“No one knew the answers to the questions I had,” Zall said. Such as: “Why did it happen? Who caused it to happen?”

And what are the stories yet to be told?

The questions she had as a child growing up in the Powell area led her to research as an adult. After 37 years of teaching, Zall “decided maybe I could find some answers to the questions I had.”

She became involved with the Heart Mountain Wyoming Foundation in 1999. The foundation began in 1996 as a local effort to preserve the site, where few buildings but an abundance of history remained.

“They did a tremendous amount of work to make sure the interpretive learning center opened,” Zall said. “It couldn’t have occurred without them.”

Former U.S. Sen. Alan Simpson and former U.S. Rep. Norman Mineta supported the endeavor as it developed, as did former internees and other volunteers. Today, the Heart Mountain Wyoming Foundation Board of Directors and an advisory board consist of a diverse group of volunteers from across the United States.

For Zall, her role as acting curator means she receives the artifacts from internees and their families, year after year.

Just last week, she received a 48-star American flag that flew at a Japanese-American family’s grocery store in the 1920s.

“It was in the family for over 90 years,” Zall said. Despite only being able to take a suitcase with very limited belongings, “she took the flag to the camp — she carried it at Heart Mountain.”

That American patriotism rang true in other internees. In her research, Zall found notes from several young Japanese-American women who wrote that throughout World War II, they never lost faith in Uncle Sam.

“You lose your house, your pets, your livelihood, and yet you still have faith in Uncle Sam,” Zall said.

Last week, Zall walked through the new exhibits with tears in her eyes, seeing the items she carefully catalogued over the years finally on public display. And she expects the interpretive learning center will only grow and expand in the stories told, the memories preserved.

“It becomes more and more interesting the more I get into it,” Zall said. “It will take time, but I expect we’ll become a world-class research center.”

When she was released from the Heart Mountain Relocation Camp in January 1943, columnist Oyama left with kind words for the people of the Powell Valley.

“We are actually sorry about leaving a state whose people have been so genuinely kind and sincere who have proved themselves truly democratic, Christian and American,” Oyama wrote in her farewell column. “We leave with the feeling that some day we simply must come back so that we can get to know you better. Yes, we want to come back to Wyoming.”

This weekend, those words penned decades ago will come to pass as hundreds of Japanese-Americans — some who were interned, some who are descendants of internees — return to Heart Mountain.