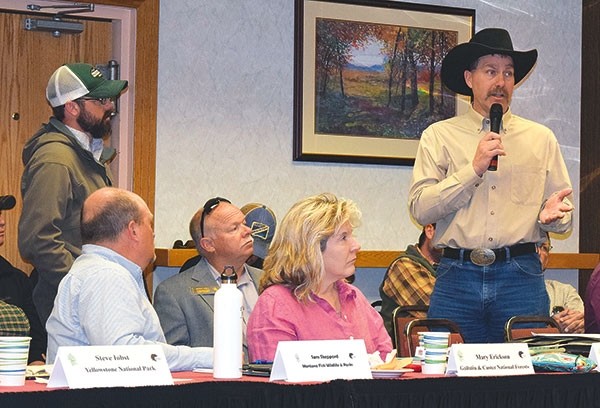 At the Yellowstone Ecosystem Subcommittee of the Interagency Grizzly Bear Committee Thursday in Cody, Lee Livingston (far right), Park County commissioner and Cody outfitter, said the grizzly bear’s recovery has been successful. From left are Luke Ellsbury of the Wyoming Game and Fish Department, Sam Sheppard of Montana Fish, Wildlife and Parks, Bucky Hall of the Park County Commission and Mary Erickson of Custer-Gallatin National Forest in Bozeman, Montana. ‘It’s time for them to be delisted,’ Livingston said.
Tribune photo by Gib Mathers
Posted Tuesday, May 5, 2015 2:34 pm
By Gib Mathers

The public packed the meeting room and provided comments while representatives of federal and state agencies involved in bear recovery provided population updates.

Grizzly bears were delisted in 2007, then re-listed in 2009 by a U.S. District Court judge who cited the scarcity of whitebark pine that produces nutritious seeds popular among grizzly bears.

“I think we are close to the (Fish and Wildlife) Service making that decision as to whether they’re going to file a (delisting) rule or not,” Nesvik said.

Greater Yellowstone Ecosystem (GYE) grizzlies are an island population, meaning they can’t rendezvous with bears in Canada or northwest Montana for genetic exchange, said Chuck Neal of Cody, author of Grizzlies in the Mist.

Dewey Vanderhoff of Cody said grizzly habitat should not be restricted to lines drawn on maps designating the recovery area, but Vanderhoff said he heard no discussion at the meeting about expanding suitable habitat outside the GYE.

“What is being done to open linkage to other populations?” Neal asked.

As per ESA recovery requirements, the grizzly population must be self-sustaining. Isolated GYE grizzlies need to connect with other populations to find food and mates, said Bonnie Rice of the Sierra Club.

There are an estimated 757 grizzlies in the GYE. “Same as last year,” said Dan Thompson, Game and Fish statewide

supervisor of the large carnivore management section in Lander.

The population was growing by 4 to 6 percent from the 1980s and 1990s. By the 2000s, it slowed to zero to 2 percent, said Frank van Manen, Interagency Grizzly Bear Study Team team leader in Bozeman, Montana.

The younger population declined slightly, with some hypothesizing that a decline in whitebark pine decreased population density is responsible, van Manen said. However, the 2013 food synthesis report for the Interagency Grizzly Bear Study Team said there was no decline in body mass or reproduction due to less whitebark.

Grizzlies have filled the grizzly recovery zone for the most part, said Dan Bjornlie, Game and Fish trophy game biologist from Lander.

There has been no documented expansion in the Big Horn Mountains, Bjornlie said.

“The big growth was in the 1990s, and the 2000s was when we saw the big increase in distribution,” Bjornlie said.

Because of higher population density, cub survival has been lower since the early 2000s. Males will kill cubs, and mothers sometimes die trying to protect their offspring. Wolves prey on cubs too, but they have only four verified instances of cubs killed by wolves, van Manen said.

James Walks Along, a Northern Cheyenne from Lame Deer, Montana, took a stab at speaking between bear expert talks. In a confusing mixup, he was able to secure the microphone for a minute or two, but its volume was turned off. Within a couple minutes he was led from the podium. Public comments were allowed at the end of each day, but limited to three minutes per speaker.

“We (Northern Cheyenne) have a long history with this animal,” Walks Along said during his authorized talk time.

All Northern Plains tribes should be included in any decision-making process. “We’d like to have a say in this,” Walks Along said.

“Our tribe, we expect consultation with the Fish and Wildlife Service or Forest Service, whoever,” said Norman Willow, a Northern Arapaho committee member. “We don’t want no delisting of the grizzly bear.”

The federal government has a responsibility to consult with the tribes if a decision will impact them, said Pat Hnilicka, assistant project leader for Fish and Wildlife in Lander. “So they do have as much say as any American in the process.”

Hnilicka works with the tribes on the Wind River Indian Reservation.

“(Tribes) are part of the process,” Thompson said. “In the end, it’s just like everything else; it’s a public comment.”

Buster Tolman, Bennett Creek Ranch owner in Clark, wants the bears delisted. “By all means, I’m for that.”

It’s mostly grizzlies that are taking his calves, Tolman said. He has lost as many as 20 head per year. His calves in the Beartooth Mountains weigh 20 to 30 pounds less than his other stock because bears frighten them, Tolman said.

Tolman said he is reimbursed for cattle lost to predation, but they must have the carcass to prove it was killed. Grizzlies take carcasses to cache. About 80 percent of the time, they have some remains so they can prove a bear killed it, he said.

“It’s time for the grizzly bear to be delisted,” said Curt Bales, who ranches on the South Fork of the Shoshone River.

“I’m going to speak as a native from Cody,” said Lee Livingston, a Park County Commissioner and Cody outfitter.

Livingston said he has observed the bear’s recovery for many years. “It’s been a success story,” he said.

He said grizzlies should be managed as a recovered species.

“It’s time for them to be delisted.”