Sitting on long tables inside the GT Aeronautics hangar at the Powell Municipal Airport are several drones the company’s president and CEO, Thomas Rullman, designed. They aren’t the … 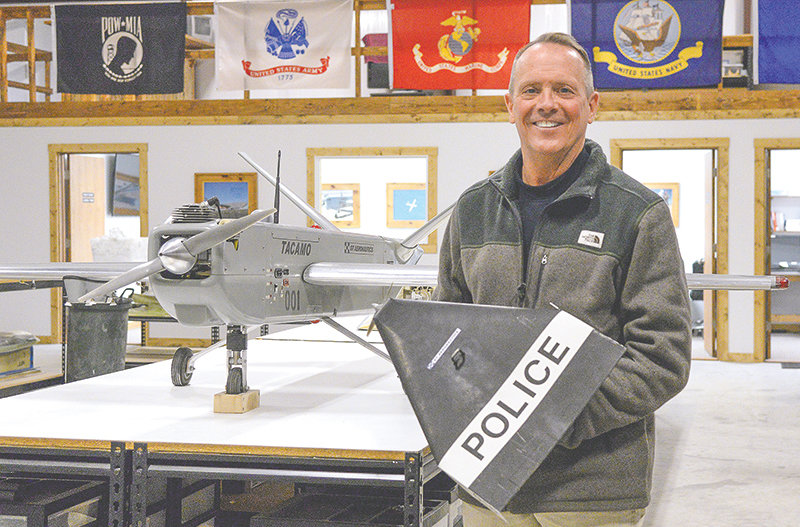 Thomas Rullman, president and CEO of GT Aeronautics, holds a bandito drone inside the company’s hangar at the Powell Municipal Airport. In military operations, the banditos can be used against ground or air targets. On the table is Tacamo, which can hold two of the banditos.
Tribune photo by Kevin Killough

A line of used banditos covers a table at the GT Aeronautics facility at the Powell Municipal Airport.
Tribune photo by Kevin Killough
Previous Next
Posted Thursday, February 6, 2020 8:20 am
By Kevin Killough

One drone they produce, the GT-380, is the civilian version of an unmanned aerial vehicle (UAV) that was developed for the Navy to launch precision-guided loitering munitions; the smaller drones the military version launched fly themselves towards targets and detonate when nearby.

Ask Rullman how he figured out how to design and manufacture these aircraft and he answers simply, “I’m an engineer.”

If all goes well, he hopes to get FAA type certifications, which would allow him to produce his UAVs for commercial applications, just like aircraft manufacturers do for airplanes. If GT Aeronautics succeeds, the accomplishment will be the first of its kind.

To show off what he’s doing at the airport north of Powell, Rullman plans to host a March open house for state and federal lawmakers, as well as the public.

Rullman has been an airline pilot with Delta Airlines since 1988, but during a downturn in the company’s performance, he decided to found a company he could run on the side.

“I wanted some security,” Rullman said.

He started GT Aeronautics in 1998 as a model airplane company in Southern California. By 2000, Rullman was moving entirely into the development of UAVs.

“No one even knew what drones were back then,” Rullman said.

The move to Wyoming began when California’s Legislature enacted what he refers to as a “rain tax,” that fines manufacturers if they don’t clean the rainwater that runs off their roofs. He was fined over $2,000, although his 1,400 square foot shop was a small portion of a big commercial building; meanwhile, a much larger accounting firm next door wasn’t subject to the law.

Among plenty of other regulatory barriers to doing business in California, the fine on rain runoff went on the pile, and the camel’s back couldn’t take any more.

“California was just killing us. So I shut down the company,” Rullman said. “I wasn’t paying that tax.”

He considered a few states in his search for a more business friendly environment; he said a few sought to entice him.

“I got a letter from [then-Gov.] Rick Perry saying, ‘We’ll build you a facility in Texas. Come on down,’” Rullman recalled.

Wyoming extended similar offers. In 2017, the Wyoming Business Council tentatively approved a $435,400 grant to build a manufacturing facility at the Powell airport that would be leased to GT Aeronautics; however, the business and the City of Powell ultimately made a mutual decision to withdraw the request. Rullman said Wyoming’s welcoming culture won him over more than its financial incentives.

He recalled how he and his wife were traveling up to Cody when his truck’s transfer case started having problems. He pulled into a little gas station in Shoshoni with the gears in his pickup grinding away. The woman at the station said there was no mechanic in town, but if he hurried, he could get to the one in Riverton before it closed in 30 minutes.

He sped down to Riverton and learned it would take three days to fix the truck. Rullman told the mechanic where they were headed, and the mechanic offered Rullman his own personal vehicle to use while the truck was worked on. After so long in Southern California, Rullman couldn’t believe a total stranger would lend him his car for three days.

Everything from there fell into place. Rullman found the perfect home in Wapiti, the Powell airport was ideal for his operation — the sparsely populated territory around the facility makes it easier to get the FAA permissions he needs for test flights — and Powell Economic Partnership helped facilitate his move.

“If I can help our troops in any way, that’s really my goal,” Rullman, a former Navy pilot, explained. “It’s my way of giving my talent … to give back something.”

The Department of Defense’s Predator drones require an 8,000-foot runway and carry hundreds of pounds of ordinance; in contrast, Rullman’s UAVs can take off from small dirt strips, and the loitering munitions, called banditos, can launch from mobile stations that sit on the back of Humvees.

“We can bring this thing down to a smaller level,” he told the DOD. “Make it an expeditionary unit like in the Marine Corp or an Army unit on the front lines.”

Rullman said he presented at the Pentagon a number of times in 2006 before he finally managed to get their attention. They weren’t so much interested in GT’s drones for use in America’s arsenal, but concerned as to how the technology could be used against the United States — and they wanted GT Aeronautics to help develop a counter system.

“They hired me to hack myself,” Rullman said.

The military version of the GT-380, called Tacamo, can carry two banditos, and its larger brother, called Bandit, can carry four. The banditos can be launched against other UAVs or even ground targets. Put simply, the big drones can seek out enemy drones in an area and send the banditos to destroy them. During test flights, Rullman said, the banditos got within 18 inches of their drone targets, which was enough for their 25-foot blast radius.

“I ain’t bragging,” Rullman said, “but ... there is not one company in the United States that has accomplished a counter UAS [Unmanned Aircraft System] intercept mission to the degree we did.”

The overall goal was to become a “program of record” and make GT Aeronautics the main supplier of a funded weapons program. Rullman said a lot of these lucrative programs start out as small companies like his. Insitu Scan Eagle, for example, developed drones for DOD programs, and Boeing ended up buying them out for a reported $400 million.

“Lockheed Martin buys companies like this to build these things,” Rullman said.

Unfortunately, in 2014, the Pentagon began to shy away from blowing up drone threats, due to concerns over how falling debris could potentially hurt civilians in urban areas.

“They kind of got away from the idea of things going boom,” Rullman said.

There were a number of other political challenges that go into getting DOD contracts, and GT’s counter UAS wasn’t selected as a program of record.

Out at the Powell airport, Rullman’s main goal is the commercial market — and getting the FAA to approve a type certification for civilian versions of the Bandit and Tacamo is key.

There are many possible applications for his drones, which fly at 10,000 feet and cruise at 100 mph for several hours. One potential use is improving search and rescue communications. Deep in mountainous territory, it’s hard to maintain reliable radio communication. But with a drone flying overhead and acting as a signal repeater, search teams could keep in touch.

Right now, however, FAA regulations on drones make it very difficult to carry out such operations. Without special waivers, drones can’t fly more than 400 feet above ground level, as well as many other limitations.

Getting the FAA on board is the challenge. The agency has struggled for years to develop regulations for this new technology and trying to get certified to produce the aircraft for commercial applications that go well beyond taking video is a trail not yet blazed.

“They’re thinking quadcopters in the FAA office,” Rullman said. “Even though I show them pictures and explain it to them, they can’t get over the hurdle.”

However, slowly but surely, Rullman believes he’s getting the FAA to understand his vision. And if he can, GT Aeronautics could become a major manufacturer in the area. He’s previously had visits from the FAA and more are planned in the near future.

Rullman is confident he’ll get there. Once he has that certification, he wants to pursue a hybrid airport, which will conduct manned and UAV operations side-by-side, ideally at the site north of Powell.

“The state of Wyoming,” Rullman said, “is going to have one of the very first airports where manned aircraft and drones are operating at the same time.”