When Skylar Cooley steps on the stage at this year’s Nutcracker, it will be the culmination of 15 years of hard work.

Cooley started dancing at the age of 3. Now a Powell High School senior, … 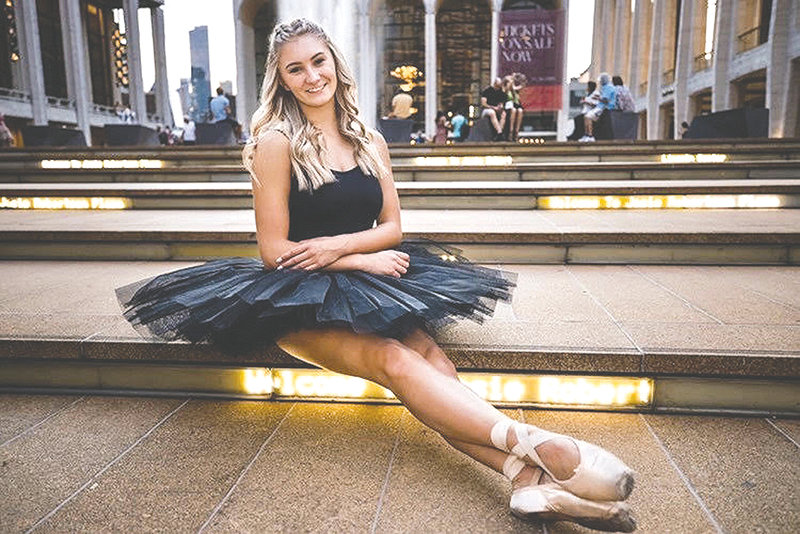 Skylar Cooley, a senior at Powell High School, will play the lead role of Arabian in the Land of Sweets, Snow and as a demi-soloist in Flowers in the Nutcracker, staged Dec. 14-15 in Cody.
Photo courtesy Chris Harrison, Wyoming Nomad Photography.
Posted Tuesday, December 3, 2019 8:20 am
By Rachel Kuntz

When Skylar Cooley steps on the stage at this year’s Nutcracker, it will be the culmination of 15 years of hard work.

Cooley started dancing at the age of 3. Now a Powell High School senior, she will perform the lead role as Arabian in the Land of Sweets, Snow and as a demi-soloist in Flowers during the Rocky Mountain Dance Theatre’s 22nd annual Nutcracker. Performances take place Dec. 14-15 in Cody.

As part of the senior company at the  Rocky Mountain Dance Theatre (RMDT) studio, Cooley considers the group to be her second family.

“At the studio, we have all been dancing together longer than we can remember, and we have created a family out of it,” Cooley said. “We are all so close, which is good considering how much time we all spend together.”

Cooley performs in the lead roles in performances and sets an example for the younger dancers as part of the senior company.

“We work hard to inspire the young dancers to push themselves to get better,” she said.

Over the past 15 years, Cooley became versatile in many styles of dance, including ballet, hip hop, contemporary, musical theatre and jazz.

“She has grown into a beautiful dancer and performer,” said RMDT artistic director Elizabeth Fernandez.

Cooley also commutes a half-hour to Cody to attend classes in their most advanced level, dancing five to six days a week.

With school, family, driving to and from the studio and other activities and responsibilities to juggle, it can be difficult to manage it all.

“Some days, all you want to do is give up, but that is not an option for us,” Cooley said. “We must continue to practice and work hard. We all struggle with this occasionally, but we know that giving up is never the answer.”

Cooley added: “My biggest motivator is thinking of the result of our hard work. Thinking of being on-stage performing is so exciting, and the feelings I get make driving to Cody every day for rehearsal/class is totally worth it.”

Every other year, the senior company takes a trip to New York City to experience hands-on what dance classes were like at some of the top studios in the city, which Cooley took part in.

“This is always such a blast seeing how serious [New York dance instructors] are about dance in the city makes us come back to our small town and work even harder,” Cooley said.

She plans on continuing taking dance classes, but not professionally. Cooley intends to attend the University of Wyoming next fall and major in psychology. She then hopes to go to New York University for medical school.