Just 24 hours removed from their most lopsided defeat of the season, the Panthers knew they had to make a statement … 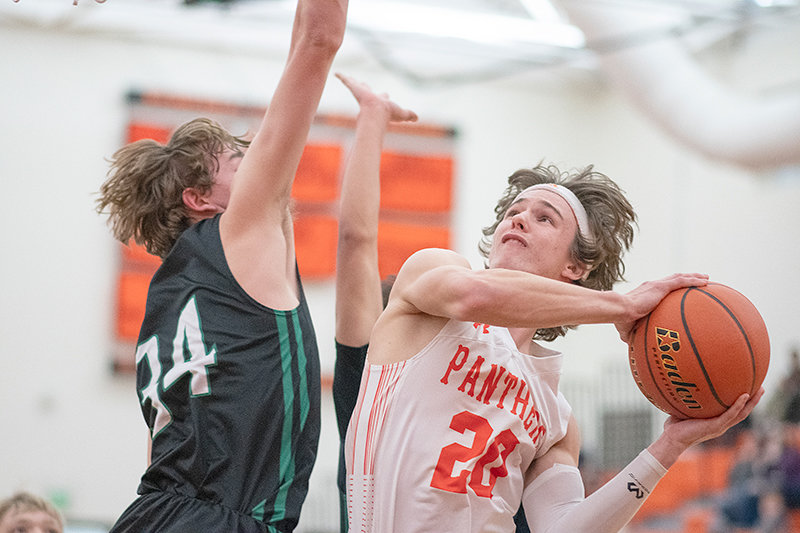 PHS junior Zach Ratcliff attempts a contested shot Saturday in the Panthers’ contest against Lander Valley. Thanks to a 20-6 run to open the game and strong free-throw shooting, PHS earned a 65-57 win over the Tigers.
Tribune photo by Carson Field
Posted Tuesday, January 26, 2021 8:15 am
By Carson Field

Just 24 hours removed from their most lopsided defeat of the season, the Panthers knew they had to make a statement against Lander Valley. And they did.

PHS opened Saturday’s home contest against the Tigers on a 20-6 run, thanks to efficient scoring and aggressive defense. That paved the way for a 65-57 PHS win — a welcome rebound from an 86-59 loss to Worland on Friday.

“The kids were disappointed in their defensive effort from the night before and knew that they had to play much better in order to hold Lander in check,” PHS head coach Mike Heny said. “The kids did a good job moving the ball early in the game on offense, and we were able to use our movement to get some really good looks at the rim, as well as knock down some perimeter shots.”

Later in the game, the Tigers picked up steam and narrowed the margin to single digits. Though the Panthers’ ball control deteriorated in the game’s late stages, according to Heny, the team was able to escape thanks to the early advantage and clutch free-throw shooting in the fourth quarter (14-of-16).

“The kids were able to take advantage in enough situations to sustain the lead they had built,” Heny said. “We will need to work on taking care of the ball a lot better when we are closing teams out at the end of the game.”

PHS senior Mason Marchant was the Panthers’ leading scorer in this contest, tallying 29 points. He also led the team in boards with 13.

“Mason had a great weekend for us on both ends of the floor,” Heny said.

Against Worland on Friday, Powell struggled to find any rhythm against a team Heny described as “not having any weaknesses at this point.” The Warriors cruised to a 86-59 win on their home court.

Heny said the rout exposed several areas in which the Panthers need to improve.

“Against a team that constantly puts that much pressure on both ends of the floor, we need to do a better job of controlling the pace and taking advantage of our strength,” Heny said. “We will have to limit turnovers and do a much better job of defending the post, the dribble drive, as well as defending without fouling.”

Mason Marchant was once again Powell’s top offensive player, this time scoring 17 points. He notched 14 boards in the defeat, as well.

PHS plays two of its foes from around the area this weekend: Lovell and Cody. The Panthers play a road game against the Bulldogs at 7 p.m. Friday and face a home test against the Broncs on Saturday at 7 p.m.