Former U.S. Fish and Wildlife director Aurelia Skipwith Giacometto made it to Powell in the wee-hours of the morning Sunday, just after the first captively bred greater sage grouse egg was discovered … 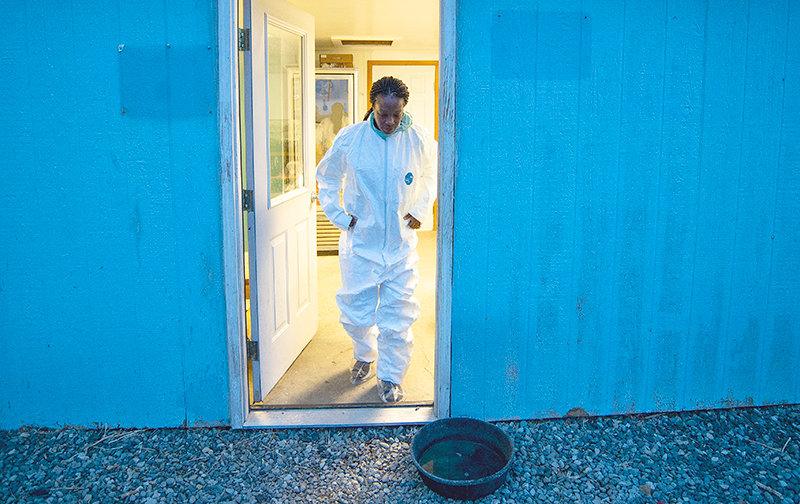 Former U.S. Fish and Wildlife Service director Aurelia Skipwith Giacometto steps out of the hatchery facility before sunrise at the Diamond Wings Upland Game Birds farm in a suit intended to protect the 51 sage grouse being raised on the farm from diseases. Giacometto, now the CEO of the International Order of T. Roosevelt, was in town to visit the Powell bird farm Sunday.
Tribune photo by Mark Davis 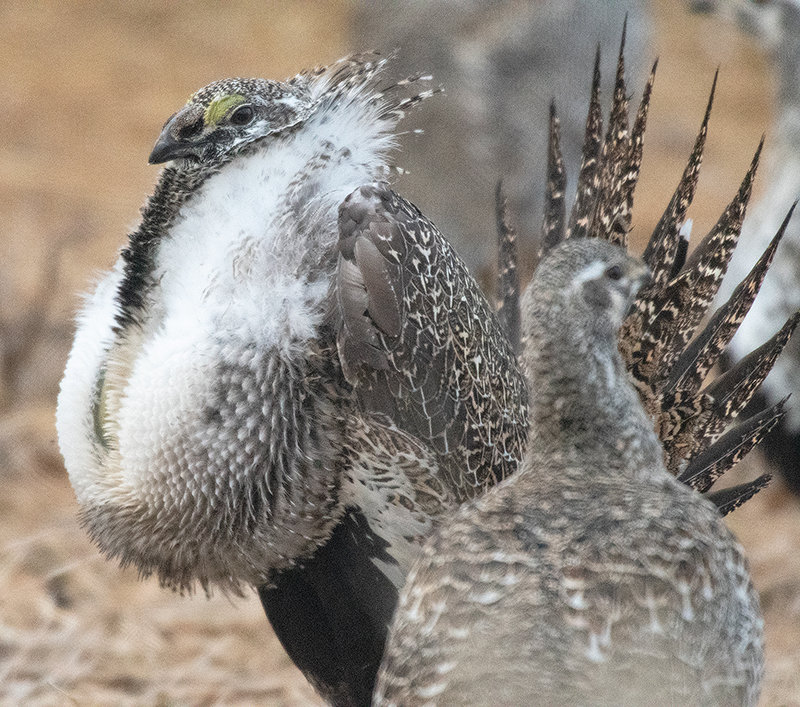 A male sage grouse attempts to attract a hen while puffing out his chest, spreading his tail feathers and dancing while in captivity at the Diamond Wings game bird farm. The females have begun laying eggs for the first time at the facility.
Tribune photo by Mark Davis 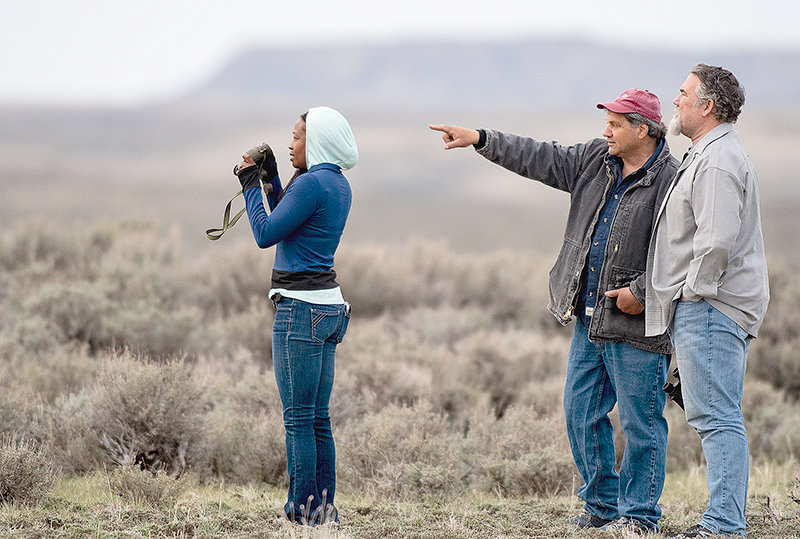 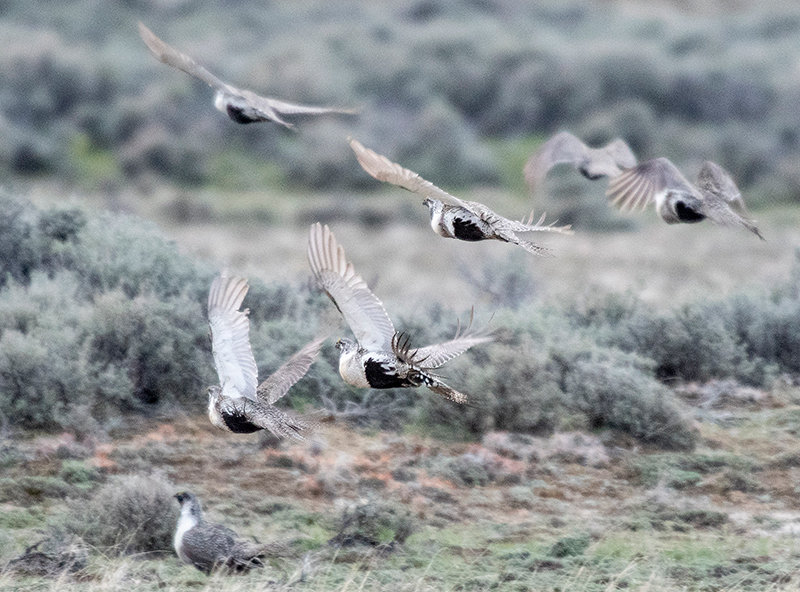 Sage grouse scatter after frequenting a lek on Polecat Bench Sunday. The birds are key species in the state’s sagebrush steppe.
Tribune photo by Mark Davis
Previous Next
Posted Thursday, May 5, 2022 8:25 am
By Mark Davis

Former U.S. Fish and Wildlife director Aurelia Skipwith Giacometto made it to Powell in the wee-hours of the morning Sunday, just after the first captively bred greater sage grouse egg was discovered in a local private game bird farm’s flight pen.

The Trump administration official, who was the first Black director of the Service, came to see the captive breeding program at Diamond Wings Upland Game Birds farm, just west of Powell and to report on their progress to her new employers. Giacometto toured the facility, including the hatchery. She was then escorted to a nearby lek on Polecat Bench by Karl Bear, the facility’s manager, to observe the iconic species of the sagebrush steppe in the wild.

Giacometto was excited to observe both captive and wild grouse in person, which were strutting at both locations. It was her first official act as the newly appointed CEO of the International Order of T. Roosevelt, a non-profit which organized in late April.

It was another first for her witnessing the flamboyant nature of the bird’s mating ritual, although conservation of the grouse was often debated at her previous job with the Fish and Wildlife Service.

Giacometto said she worked to cooperate with companies and landowners to initiate Candidate Conservation Agreements during her time as director, but that she had only seen the species “in photographs, on TV or read about them.”

“Sage grouse populations were a huge topic at the Department of the Interior,” she said. “We were constantly evaluating numbers and trying to figure out if [the species] was going to be listed and what we could possibly do to prevent that.”

A candidate conservation agreement is a voluntary agreement between the federal government and private landowners. It provides incentives to conserve species of concern.

The visit and discovery of the first egg gave Karl Bear two reasons to celebrate.

In the fifth year of the controversial experiment, the first egg from a broodstock reared from wild eggs represents a new biological plateau for Bear’s efforts.

“This is huge for us,” Bear said, carefully displaying the lone egg for Giacometto inside the hatchery.

The farm also raises tens of thousands of other upland game birds including pheasant, chukar and Hungarian partridges. Bear has discovered more eggs since the visit, finding a second egg Tuesday morning. He’s hoping for more.

“Two hundred eggs is our goal,” he said.

The project was made possible by the Wyoming Legislature in 2017 when it passed a law allowing private game bird farms in the state to attempt captive breeding of the iconic species of the sagebrush steppe.

The law was set to end this coming December, but the Wyoming Legislature in May extended a sunset clause in the original law for five more years. The legislative process was successful, largely due to lobbying by the Western States Sage Grouse Recovery Foundation, which is headed by former Wyoming State Senate president Diemer True, also the previous owner of Diamond Wings.

Giacometto is the highest profile politician to visit the farm. She toured the hatchery and flight pens from outside the fencing while dressed in a biohazard suit provided by the farm. The tour of the facility was limited due to concerns enacted by the farm to mitigate the possible transfer of a deadly strain of avian influenza that has killed millions of wild birds across the nation.

Last week, the Game and Fish bird farm in Sheridan depopulated its broodstock of pheasants “out of an abundance of caution” after finding dead turkeys nearby that were positive for the highly contagious virus. The pheasant tested negative for the virus, but the department decided it was a necessary step to protect the future of the state farm’s stocking program.

Giacometto, who has a master’s degree in molecular genetics and a law degree, is researching projects for the 501(c)3 that “follow the United States’ heritage and use ingenuity to ensure a sustainable future for the world’s most precious wildlife and their habitats,” according to the organization.

Wesley Bates, CEO of Stanley Steamer, is the president of the organization. Warren Sackman, Safari Club International Foundation president, sits on the board along with other business leaders.

“I am excited about the founding of the International Order of T. Roosevelt and to have Aurelia S. Giacometto at the helm,” Bates said. “We will accept the challenges to bring back species on the brink of extinction, to educate youth about their heritage and the importance of ensuring that our wildlife and their habitats persist into the future, and we will work across other conservation organizations to strengthen the investment in our wildlife.”

Giacometto and her husband, Leo — a businessman, lobbyist, and former politician who served as a member of the Montana House of Representatives from 1987 to 1990 — were also treated to breakfast at the Irma Hotel in Cody and then received a full five-museum tour of the Buffalo Bill Center of the West by Rusty Rokita, who serves on the board of trustees for the center.

Giacometto was confirmed by the U.S. Senate as director on Dec. 12, 2019, by a 52–39 vote after her appointment by former president Donald Trump was held up for 18 months.

In her role as director of the U.S. Fish and Wildlife Service she managed a workforce of over 8,500 federal employees. She previously served as the Deputy Assistant Secretary of Fish Wildlife and Parks, has worked at both the U.S. Department of Agriculture and the U.S. Agency for International Development and spent six years with Monsanto Company, an American agrochemical and agricultural biotechnology corporation.

The 41-year-old is also an accomplished marathon competitor, capable of finishing a 26.2-mile course in under three hours, her husband proudly boasted. After being appointed as deputy assistant in 2017, Giacometto said she would only accept the position if her start date was after the Boston marathon.

Bear hopes the visit helps bring prominence to his sage grouse project, which is largely funded by the Western States Sage Grouse Recovery Foundation. Bear said he was honored to have Giacometto take interest in the project and was happy she was able to see grouse during their breeding rituals both at his facility and in the wild.

“Her timing was impeccable,” Bear said after the visit.