The federal government is being asked to pay nearly $1 million per year to keep United Airlines flying between Cody and Denver in Yellowstone Regional Airport’s slower months. 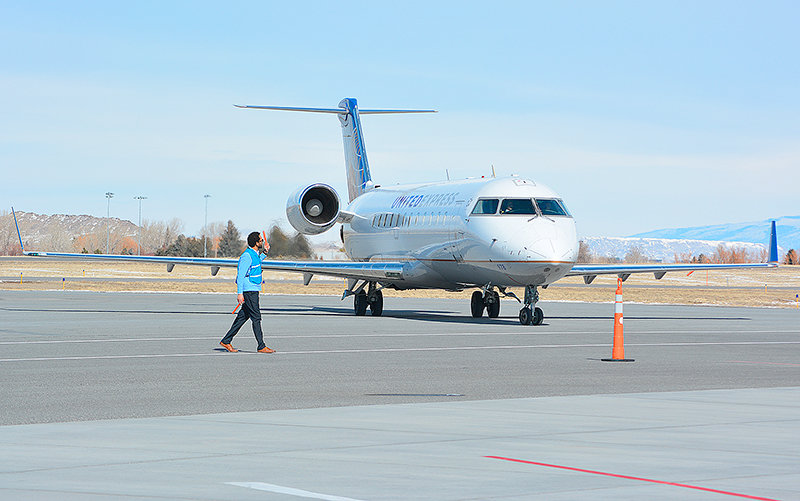 United Airlines says it will need a roughly 18% higher federal subsidy to continue providing twice a day flights to Cody from Denver. Park County commissioners issued a letter of support for the proposal on Tuesday.
Tribune file photo by CJ Baker
Posted Thursday, January 20, 2022 8:25 am
By CJ Baker

The federal government is being asked to pay nearly $1 million per year to keep United Airlines flying between Cody and Denver in Yellowstone Regional Airport’s slower months.

From June through September, United flies at its own risk to Cody, but for years, it’s required a subsidy to serve the airport from October through May. Starting next fall, the airline says it will need $996,968 a year to keep offering twice-a-day flights to and from Denver. That’s up more than 18% from the current $841,000 subsidy offered through the U.S. Department of Transportation.

Ankit Gupta, a senior vice president at United, said in a letter to the DOT that the higher subsidy was necessary “to operate sustainably between October and May in the face of a higher-cost environment going forward.”

“Resource constraints at United, in part caused by the COVID-19 pandemic but expected to persist into the intermediate future, contribute to the increase in operating and structural costs,” Gupta wrote, saying the increased subsidy “recognizes the economic reality” of serving Yellowstone Regional Airport’s off-peak months; it’s not unusual for passenger boardings to shrink to about a third of summer traffic.

The subsidies are offered through the DOT’s Essential Air Service program, which guarantees smaller airports like Cody a connection to a larger hub, like Denver. SkyWest Airlines previously provided a connection to Delta Air Lines’ hub in Salt Lake City through the EAS program, but has not submitted a proposal the last few cycles; United was the only airline to respond to the DOT’s November request for proposals and it’s expected the federal government will approve their request.

“We’ll get our service, so we’re happy with it,” said Bucky Hall, a member of the Yellowstone Regional Airport board and the administrator of Cody-Yellowstone Air Improvement Resources.

Still, he’s been seeking to round up letters of support for United’s proposal from other entities like the City of Cody, the Buffalo Bill Center of the West, Cody Regional Health and the Park County Commission.

On Tuesday, commissioners agreed to sign a letter backing United’s request for the $996,968 annual subsidy.

“I don’t think we have a choice — we need to support this, we desperately need the essential air service here in Cody,” said Commissioner Joe Tilden. However, he took issue with language in the commission’s draft letter saying that “for the past two years we’ve enjoyed the excellent service from United Airlines.”

Commissioner Lee Livingston quipped that the board should write they “suffered through the subpar” service.

Multiple commissioners have expressed frustration about the number of delayed and canceled flights at Denver International Airport. Hall also alluded to the issues, quipping that Denver-Cody flights are generally full “when they fly, for those of you that have been stuck in the Denver airport.”

Tilden initially suggested the letter be revised to say “we’ve enjoyed the service from United Airlines,” but Clerk Colleen Renner asked, “Have we enjoyed it, though?”

The commission ultimately decided to simply say that “for the past two years we have had service from United Airlines.” They added that, “We have a long community relationship with United, and we look forward to working with them in the future.”

In United’s letter to the DOT, Gupta described Denver as one of its largest and fastest-growing hubs, serving more than 160 destinations and featuring 500 daily departures in the summer months, with a couple dozen more gates being added.

“Whether customers want to travel across the country, or around the world, United’s DEN hub offers unparalleled connectivity to more destinations than any other carrier in the Mountain West,” Gupta wrote.

United’s proposal says it plans to charge an average of $139 per ticket, which would only cover about $5.4 million of the airlines’ $6.4 million worth of expenses. The requested subsidy pencils out to $29 per passenger, or $1,047 per flight.

Last month, Commissioner Lloyd Thiel opposed giving Cody-Yellowstone Air Improvement Resources $26,000 of county money to help subsidize other commercial flights to Cody, including a summer flight to Chicago that didn’t perform as well as expected last summer. However, he voted to approve the letter of support for United’s federal subsidy.

“I know this money is set aside pretty much so somebody’s going to get it, and why not us get it?” Thiel explained at the meeting.

In their two-paragraph letter, commissioners described the importance of the Essential Air Service program in allowing Wyoming companies to do business outside the state and while bringing business and tourism to Wyoming.

Hall noted that Cody is actually one of the cheapest places to subsidize. Among the 111 airports in the lower 48 states, Hawaii and Puerto Rico that were participating in the Essential Air Service program last fall, only four required less money than YRA. Keeping commercial flights going to Laramie Regional Airport, for example, has been costing the DOT more than $2.21 million annually, according to federal data.

“They write the least amount of checks for this one [in Cody] because, especially … in the spring and even up until January [in the winter], the flights are full half the time,” Hall said.

He added that Yellowstone Regional Airport is set to get additional flights from Denver this spring: Starting in April, Hall said United plans to divert two daily flights to Cody that would normally be heading to the Jackson Hole Airport (which will be undergoing construction) and give YRA four daily Denver flights.

More flights will begin in the summer, though, in a change from past years, Delta has said it will not be offering any service from Cody to Salt Lake City.