The new formation is likely the result of a slow-moving landslide, said the Wyoming Geological Survey’s manager of groundwater and geologic hazards and mapping, Seth Wittke. Landslides can move at catastrophic speeds, such as what is observed in … 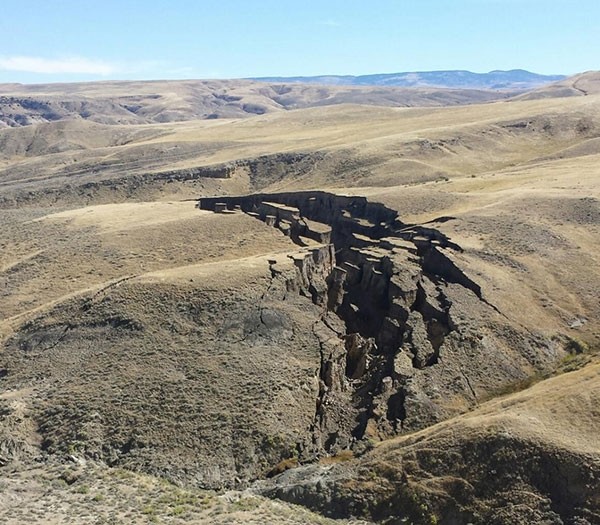 A crevasse recently formed in the sourthern end of the Big Horn Mountains. At about 750 yards long and 50 yards wide, ‘the gash’ as some are calling it, could have been caused by a landslide due to heavy rainfall in the spring. Since the new formation is on private land, the Wyoming Geological Survey is limited to speculation at this point.
Photo courtesy SNS Outfitter & Guides
Posted Thursday, October 29, 2015 2:37 pm
By Matt Naber

The Big Horn Mountains really are all they are cracked up to be as large portions of the southern end of the range recently moved to create a crack or “gash” that’s about 750 yards long and about 50 yards wide, according to SNS Outfitter & Guides.

The new formation is likely the result of a slow-moving landslide, said the Wyoming Geological Survey’s manager of groundwater and geologic hazards and mapping, Seth Wittke. Landslides can move at catastrophic speeds, such as what is observed in Washington state, while others can be much slower.

The size of this type of opening can vary depending on the size of the hill and the stability of the land, he said.

“A number of things trigger them, moisture in the subsurface which causes weakness in soil or geology, and any process that would weaken the bedrock or unstabilize it somehow,” Wittke said.

The challenge for the Geological Survey crew is the formation is on private property, so finding out exactly what happened would require access permission from the property’s owner.

“All we have seen is pictures since it is on private land,” said Wyoming Geological Survey’s public information specialist Chamois Andersen. “It’s hard to assess without someone on the ground looking at it.”

Based on prior mapping and what’s visible in the pictures, “the gash” is likely a slump, slide or detachment, Andersen said. But, without an on-the-ground investigation, it’s difficult to determine.

“There is some speculation on the web, and with our folks too, that an early, wet, spring and summer had a lot to do with it,” Andersen said. “It is not uncommon to have slides like that.”

If a formation such as the one found in the southern end of the Big Horns is found, Wittke suggests not approaching it since it can be difficult to determine if the land is still moving or if the ground has stabilized.

Landslides and other geological changes can be reported at www.wsgs.wyo.gov so the Geological Survey crew can investigate the scene to determine the cause and find out if it’s dangerous, Wittke said.