A new set of stamps celebrates America’s wild and scenic rivers — those deemed outstandingly remarkable for their fish and wildlife, geology, recreation and cultural or historical … 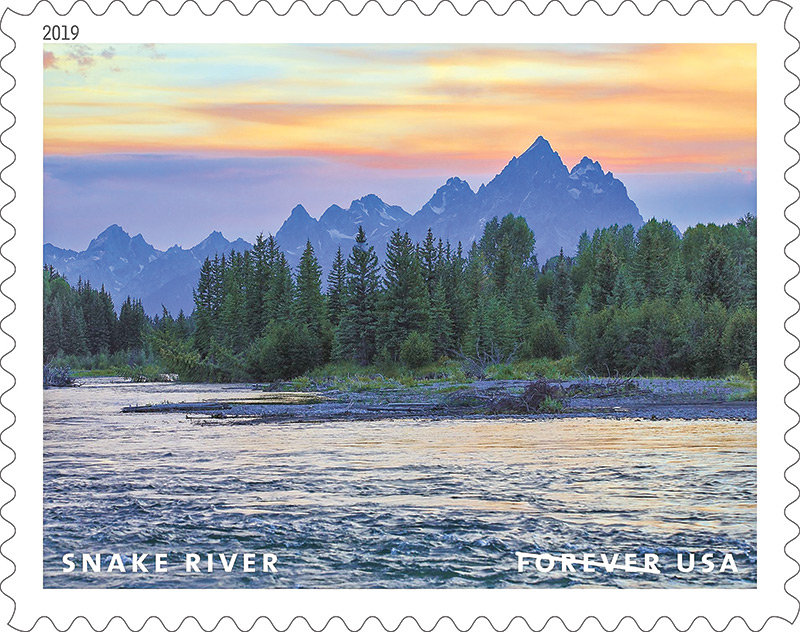 A new series of stamps featuring some of America’s ‘Wild and Scenic Rivers’ includes this image of the Snake River as it passes near the Tetons in Wyoming. Naturalist Tim Palmer captured the shot.
Image courtesy U.S. Postal Service
Posted Tuesday, June 4, 2019 8:10 am

A new set of stamps celebrates America’s wild and scenic rivers — those deemed outstandingly remarkable for their fish and wildlife, geology, recreation and cultural or historical significance. Each of the 12 Forever stamps showcases a different segment of the National Wild and Scenic River System.

One features a Wyoming segment of the Snake River, with a spectacular sunset silhouetting the Grand Tetons. The shot was captured by naturalist Tim Palmer; he also took a photo of a Montana segment of the Flathead River’s whitewater rapids that is featured in another stamp.

Montana is featured in a second stamp, as well: An image of the White Cliffs segment of the Missouri River captured by Bob Wick, a staff photographer for the Bureau of Land Management.

“Part of America’s rich heritage is the natural beauty of America’s rivers and the many habitats that support wildlife,” said Joe Corbett, U.S. Postal Service chief financial officer and executive vice president. “When Americans use the stamps either to mail letters and packages or to add them to collections, they will be reminded of our cherished wild and scenic rivers.”

At bottom left on each stamp is the river name. The words “FOREVER” and “USA” appear at bottom right.

The designs feature a portfolio of photographs that the U.S. Postal Service says beautifully represent the more than 200 rivers or river segments designated within the Wild and Scenic Rivers System.

When President Lyndon B. Johnson signed the Wild and Scenic Rivers Act into law in 1968, he noted unspoiled rivers were very rare and took action against the fear that “all rivers will go this way unless somebody acts now to try to balance our river development.”

Since then, the National Wild and Scenic Rivers System has grown to include more than 200 river segments — about 13,000 miles of approximately 3 million U.S. river miles spread across 41 states and Puerto Rico.

The new stamps are available now.