Almost half of all the grizzly bears trapped and euthanized in the Greater Yellowstone Ecosystem last year were in Park County, according to a new report. 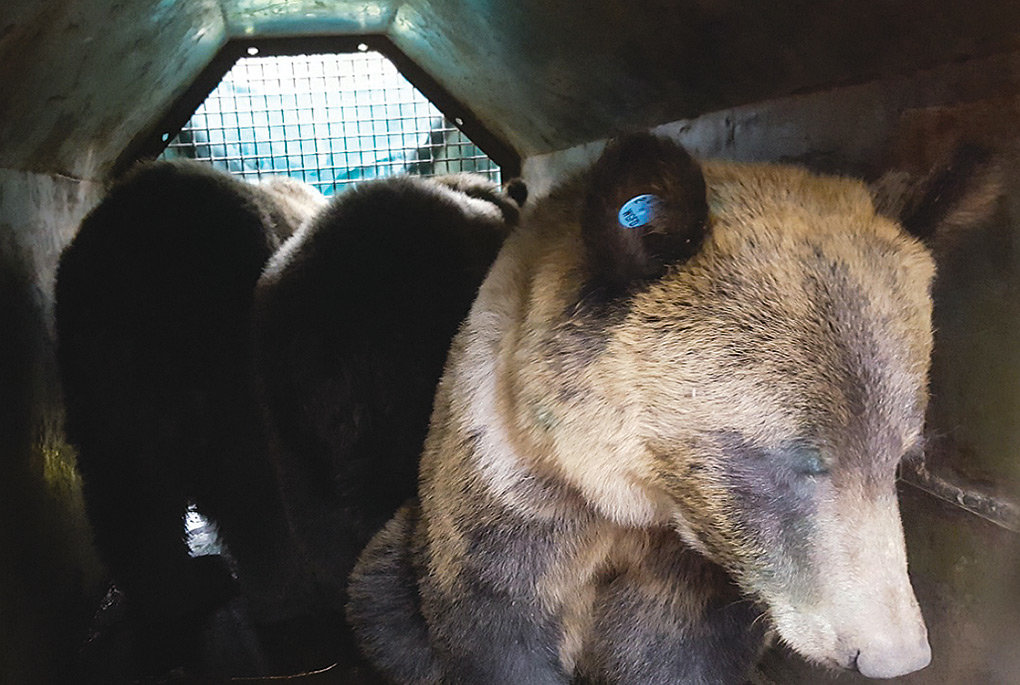 Almost half of all the grizzly bears trapped and euthanized in the Greater Yellowstone Ecosystem last year were in Park County, according to a new report.

The 2018 report, compiled by the Wyoming Game and Fish Department, said the agency captured a total of 53 grizzly bears in attempts to prevent or resolve conflicts; 29 of the now federally protected species were trapped in Park County.

A total of 59 capture events was reported, as six bears were caught twice.

Grizzlies were trapped, relocated or removed for a variety of reasons — from damaging apple trees, breaking into buildings to killing a hunter. In early October, for instance, a grizzly got into a root cellar to eat some elk quarters, the report says; later in the month, a bear was trapped and released after getting into trash and climbing onto vehicles at a Park County ranch.

The majority of grizzlies relocated or removed were done so for cattle depredation.

Bears were removed from the population due to a history of previous conflicts, a known history of close association with humans, or they were deemed unsuitable for release into the wild (e.g. orphaned cubs, poor physical condition, or human safety concern).

“It’s important to note that we are still below mortality thresholds that demonstrate the population is fully recovered,” said Dan Thompson, large carnivore section supervisor for the Game and Fish.

Wyoming also removed one grizzly in a humane action, 17 grizzly deaths are still under investigation and eight more grizzlies were found dead of natural causes or hit by vehicles, reports the IGBST, a division of the U.S. Geological Survey.

In a Thursday letter to members of the IGBST’s Yellowstone Ecosystem Subcommittee, the groups said that nearly 250 bear deaths have been recorded since 2015, including a high of 65 last year.

The groups called on wildlife managers to update a 2009 report that contained recommendations for reducing grizzly bear deaths and conflicts.

While governments have instituted some valuable measures, “most if not all of the 2009 report’s common-sense measures have not been implemented,” says the groups’ letter. “And other measures which could prevent potential conflicts, particularly in regard to requiring non-lethal conflict prevention measures of livestock producers, were not raised.”

With regard to hunting-related conflicts, “more could be done in regard to improving carcass management associated with elk hunting, requiring hunters to carry bear spray and have it immediately accessible, and placing higher emphasis on the effectiveness of bear spray in public messaging, to name just a few.”

The environmental groups also note past recommendations that subdivisions regulate attractants — that is, things like storing garbage.

In Wyoming, “conflicts” are defined as “interactions between bears, people and their property, resulting in damage to pets, livestock or bees, non-natural food rewards, animal caused human injury or death, and human caused injury or death to an animal other than legal hunting or a management action.”

It’s not unusual for a bear to be trapped multiple times. But multiple captures are taken into consideration into the conflict history of the individual when determining final management decisions. Three bears that were found south of Byron on Oct. 25 had been trapped and moved to Teton County just a month earlier. The bears were euthanized for “public safety concerns.”

Grizzly bears in Wyoming were again listed as threatened on the Endangered Species List and placed back under federal protections on Sept. 24. All management actions since have been conducted in coordination with the U.S. Fish and Wildlife Service.

A team uses a 100-page set of guidelines created more than 30 years ago for determining action in conflicts.

“The guideline tables are not rules, just guidelines. They’re still useful today and our people try to stick to the guidelines,” Hilary Cooley, grizzly bear recovery coordinator for the U.S. Fish and Wildlife Service, said last year. “But there are many tricky situations. They’re all tough decisions, but in the end if you don’t do anything it can be even worse if the [conflict bear] causes more problems in the future.”

Of the 32 bears that were removed from the Wyoming population last year, 17 were outside of the key grizzly bear habitat known as the Demographic Monitoring Area.

The DMA is the boundary within which all demographic criteria for the Yellowstone grizzly bear population are currently monitored and evaluated and essentially encircles Yellowstone National Park. Grizzlies outside the DMA do not count toward the official population of 712 grizzly bears. The official number is derived by using a counting method (Chao 2) known to be extremely conservative. Some unofficial estimates claim more than 1,200 grizzlies live in the greater Yellowstone ecosystem.