When asked for his plea to multiple felony drug charges on Thursday, Jose De La Cruz Guerra appeared to be on the verge of offering some kind of confession. 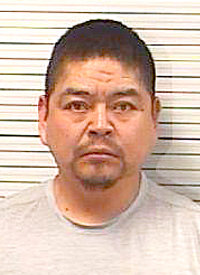 When asked for his plea to multiple felony drug charges on Thursday, Jose De La Cruz Guerra appeared to be on the verge of offering some kind of confession.

“First, I want to ask for forgiveness for getting involved in all of this,” Guerra said through a translator.

However, District Court Judge Bill Simpson quickly cautioned Guerra to consult with his attorney before admitting to any of the allegations.

“I would advise him not to say anything further at this time, as it could be used against him,” Simpson told the translator, who relayed the message.

Guerra’s attorney, Sarah Miles, then entered not guilty pleas on his behalf to three felony counts of possessing cocaine, meth and painkilling drugs with intent to deliver.

In searches of Guerra’s Powell home and car last month, authorities say they found large quantities of all three drugs that appeared to be packaged for sale. Agents with the Wyoming Division of Criminal Investigation and Powell police also seized a large amount of cash from Guerra’s vehicle and home.

Guerra is being held at the Park County Detention Center on a $25,000 bond while the case is pending. However, even if he posts that sum, the Mexican citizen will not be released from jail, as the U.S. Customs and Immigration Service has placed a hold on him. Such a hold indicates the 41-year-old will likely face deportation once his criminal case has concluded.

Charging documents say DCI agents identified Guerra as “a large-scale distributor of controlled substances” some time ago, as part of a months-long, multi-county investigation. But it was drunk driving that prompted his Dec. 4 arrest.

Responding to multiple reports from concerned drivers, Powell police spotted Guerra weaving across U.S. Highway 14A/Coulter Avenue. He eventually stopped in the middle of the highway in downtown Powell and, following eight minutes of delays, got out of his truck and was arrested.

Police found Guerra was intoxicated — he later pleaded guilty to a misdemeanor count of DUI — and also found roughly $12,600 in cash in his truck, banded with black rubber bands in $1,000 increments.

Based on that discovery, Powell Police Investigator Chris Wallace reached out to DCI Special Agent Shane Reece and asked if the agents were familiar with Guerra. As it turned out, the agents were. They subsequently obtained warrants to search not only Guerra’s truck, but also his North Cheyenne Street home and his Honda Civic.

Inside the Honda, the DCI agents allegedly found about 200 grams of cocaine, 200 grams of methamphetamine and 110 dosage units of what looked like oxycodone but what Reece suspected to be counterfeits laced with fentanyl. Because of the potentially lethal nature of even small quantities of fentanyl, Reece said the pills were not tested in the field and were instead sent directly to the State Crime Lab.

At a preliminary hearing in Park County Circuit Court last month, Reece testified that, “Not only did we have a large quantity of methamphetamine, cocaine and fentanyl or suspected fentanyl tablets, we also observed them to be packaged for individual sale.”

He said authorities found numerous empty baggies that could be used as packaging and digital scales that appeared to contain drug residue.

In an interview conducted after his arrest, “Mr. Guerra minimized his involvement at this point in drug distribution, but did admit to selling cocaine and methamphetamine to certain known parties,” Reece testified, without elaborating on those individuals.

At Thursday’s hearing in district court, Guerra said he’s been unable to speak with his attorney, in part because he doesn’t have anyone to put money in his account at the Park County Detention Center.

Judge Simpson assured the defendant that Miles “is a good attorney” and would be in touch soon.

“But there are certain limitations and issues we’re dealing with given the language barrier and availability,” Simpson said.
The English-Spanish barrier posed some challenges during Thursday’s hearing. It wound up taking an hour after the detention center was unable to get a real-time audio translation service working on its computers — and then low volume made it difficult for Guerra to hear the translator, requiring her to repeat many of the judge’s advisements and questions.

Meanwhile, Miles told the court that she was in the process of obtaining an interpreter and “I will contact my client as soon as I can.”

Guerra has a right to be tried within 180 days of his arraignment.