Lessons from the sky: Students launch weather balloon thousands of feet into the air

Students recently launched a weather balloon thousands of feet into the air as part of their technology classes at Powell High School and Powell Middle School. They attached three boxes to the balloon, each one filled with various …

Lessons from the sky: Students launch weather balloon thousands of feet into the air 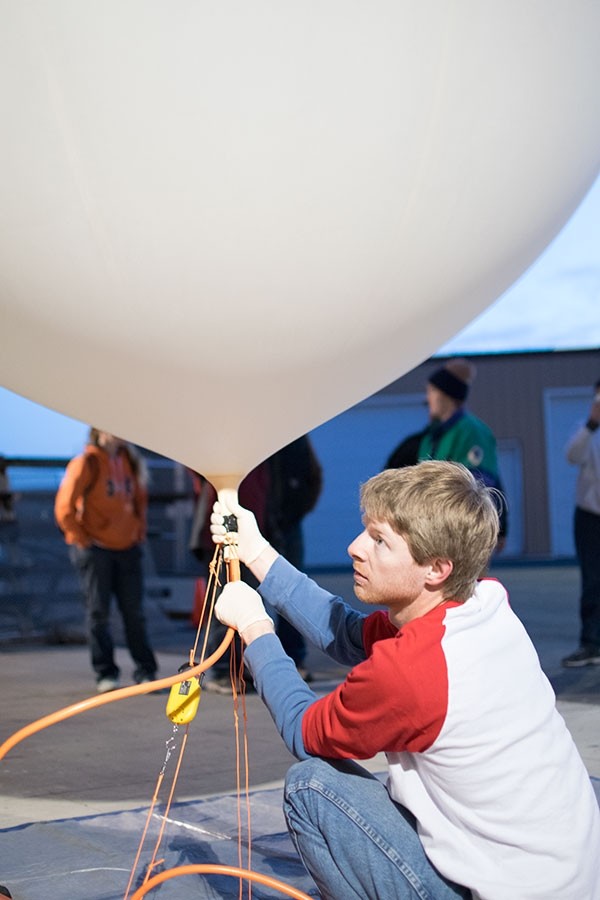 Phil Bergmaier fills a weather balloon with helium on the morning of April 10 at Powell High School. Bergmaier, a graduate fellow in atmospheric science with the University of Wyoming Science Posse, led the weather balloon project for Powell students.
Tribune photo by Steve Johnston 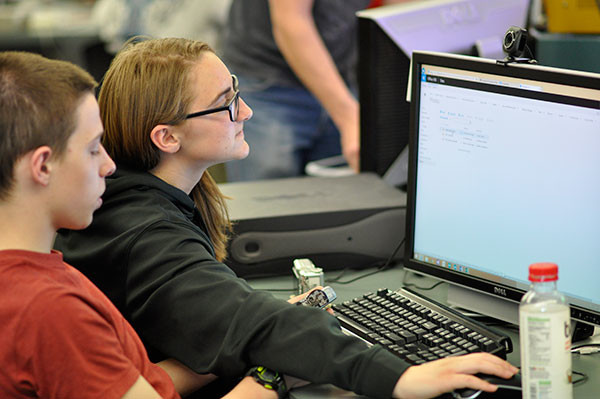 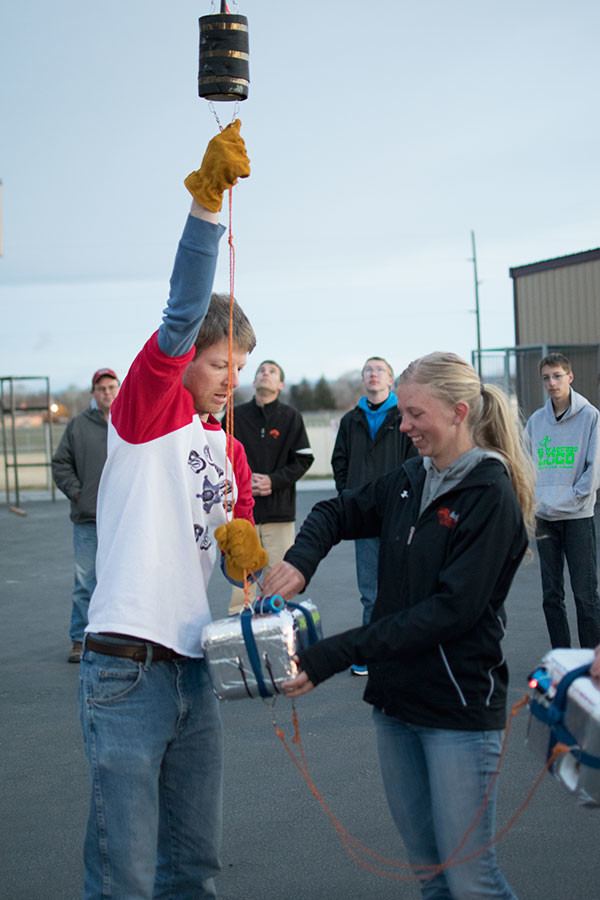 PHS student Delaney Dent (right) assists Phil Bergmaier with one of three payload boxes, which were filled with various experiments. Bergmaier is a graduate fellow in atmospheric science with the University of Wyoming Science Posse. Tribune photo by Steve Johnston 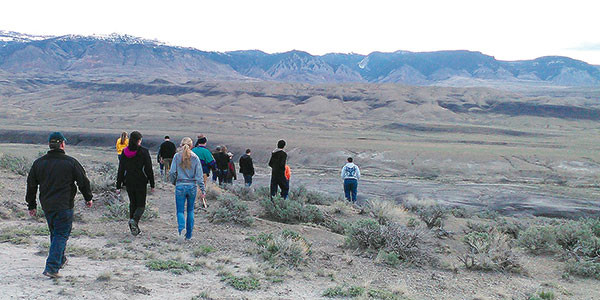 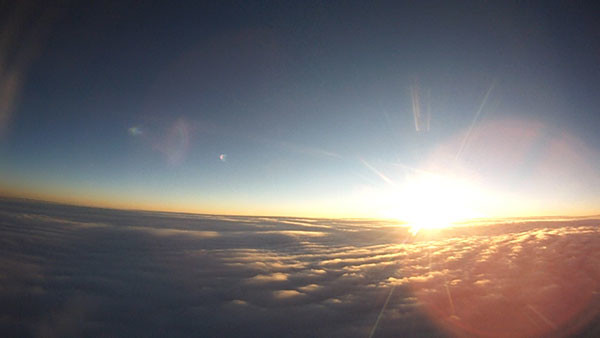 This image of the sunrise was captured by a camera aboard a weather balloon as it ascended over Powell on April 10. Courtesy photo
Previous Next
Posted Tuesday, April 21, 2015 2:50 pm
By Tessa Baker

Question: What do you get when you take marshmallow Peeps, bread dough, a petri dish, chocolate and a variety of other objects and launch them into the atmosphere with a massive weather balloon?

Students recently launched a weather balloon thousands of feet into the air as part of their technology classes at Powell High School and Powell Middle School. They attached three boxes to the balloon, each one filled with various experiments.

Just as the sun started to rise on April 10, students gathered around the giant helium-filled balloon outside the high school. Once the balloon was ready to launch, they counted down from 10.

Excitement grew in the crisp morning air as they reached “... three, two, one!” and let go, watching as the balloon quickly ascended with the boxes dangling below it.

Students, teachers and other spectators craned their necks, trying to see the balloon as it soared higher and higher. A camera on the balloon filmed its journey into the sky, capturing the sunrise’s golden light and beautiful colors.

“We really lucked out on the sunrise,” said Rick LaPlante, a volunteer who helped with the project, as he watched the balloon ascend.

Soon, the balloon was only a tiny dot in the morning sky.

After the balloon disappeared into the atmosphere, students returned to the classroom to talk with Phil Bergmaier, a University of Wyoming doctoral candidate in atmospheric science. Bergmaier brought the weather balloon project to Powell with the UW Science Posse, a group that travels around the state providing educational opportunities for students in science, technology, engineering and math (STEM).

Back in the classroom, students tracked the balloon’s flight using GPS devices. The balloon also was equipped with a variety of other sensors to measure altitude, air pressure, temperature, humidity and other conditions.

Thanks to GPS, students could find the balloon after it landed. It traveled east, over the Big Horn Lake causeway, and landed about 2 miles from the highway, near the base of the Big Horn Mountains.

When asked how they knew the balloon wouldn’t land in the water, PHS technology teacher Judith LaPlante laughed and said, “We didn’t. That was a risk and definitely something to worry about.”

Students had to hike about 2 miles from the road to retrieve the weather balloon and the three boxes with their experiments — and then hike another 2 miles back to the school bus.

“The coolest part of the project was hiking in to go get the balloon,” said Ben Williams, a PHS sophomore. “It was pretty interesting.”

Other students had a different take.

“Today I learned that hiking in the badlands is not fun,” said Gavin Asay, a freshman.

“Especially if you’re not prepared for it,” added Rhett Pimentel, also a freshman.

Once students retrieved their balloon and experiments, they had the data to begin answering their questions, such as how high the balloon traveled.

Bergmaier said previous UW Science Posse weather balloons have reached an altitude of 90,000 to 103,000 feet, but the Powell students’ balloon only reached 46,030 feet.

“It popped prematurely and dropped down without much change,” Williams said.

While that was a little disappointing, everything else went as planned with the launch, he said.

“It would have been cool if it had gone all the way up,” said Hattie Pimentel, a freshman.

Though the reason for the early descent remains a mystery, students said it’s possible the balloon was accidentally touched while it was being blown up, leaving dirt or oil that may have created a hole in the latex.

Data gathered from the balloon may hold more answers, said Judith LaPlante, who teaches technology at Powell High School. Students will be able to determine where the balloon started its descent.

“We’ll be able to pinpoint that particular location and altitude,” LaPlante said. “We’ll just play with the data and see what we come up with.”

Students also will get video footage from the balloon’s cameras in a week or two.

“Hopefully we’ll see what happened to the balloon,” said Asay.

Those kinds of calculations are exactly why LaPlante asked the UW Science Posse to bring the weather balloon project to Powell.

Oftentimes when learning how to use Excel, students process numbers that don’t really mean anything to them.

“I wanted to put it in a real-world example,” LaPlante said. “You can take something that normally might be somewhat boring and turn it into something exciting and interesting.”

Students chose what kind of experiments to put inside the three payload boxes attached to the balloon.

One batch of dough was aboard the balloon while another was kept on earth.

The balloon bread “was a lot drier and had bigger air bubbles,” said student Madisen McDonald, who later baked the two loaves of bread.

Rhett Pimentel is studying the differences between three petri dishes — one placed at the launching site, another that went airborne with the balloon and a third at the landing site.

All three petri dishes contained the same growing material, and the one at the landing site has the most growth on it.

“I’m hoping to look at them under a microscope to see if there’s anything different,” he said Friday.

LaPlante said the data holds a lot of different lessons for the students.

The UW Science Posse project was funded through a NASA Space Grant Consortium, she said.

Bergmaier, with the Science Posse, said launching a weather balloon equipped with that kind of electronic equipment can cost hundreds of dollars.

While they didn’t need a special permit for the weather balloon project, the Federal Aviation Administration does regulate how heavy the balloons can be, he said.

Bergmaier told students that the National Weather Service launches weather balloons everyday at locations throughout the country, including from its Riverton office. Data is transmitted back to the weather service, but its staff doesn’t go and retrieve the balloons, he said.

Bergmaier said data from the Powell students’ project will be archived at UW, but the main purpose is for high school and middle school students to process the information and learn from it.

“The data is all for the experience,” he said.

<!-- You can place html anywhere within the source tags -->